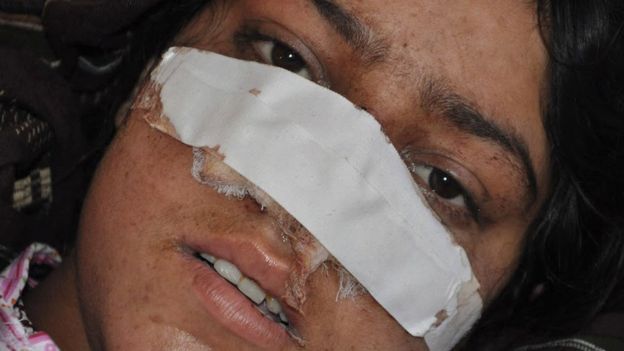 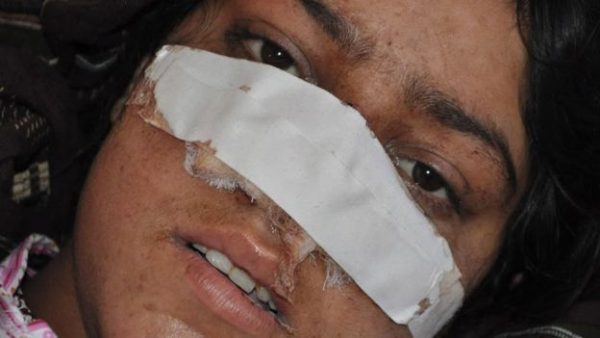 Under Islam, wife-beating is sanctioned. This woman tried to escape her husband’s devout brutality. No matter how many times she left this savage, she was brought back. She stopped going back to her parent’s house because they would send her back.

Side note: look at headline of Muhammad Sadaqat’s article, “Unkindest cut of all.” How bloodless and callous, as if it were somehow …… poetic? The unkindest headline of all.

“Unkindest cut of all : Husband chops off wife’s nose, hair in Mansehra,” By Muhammad Sadaqat, The Express, May 5, 2016:

MANSEHRA: A man chopped off his wife’s nose and hair in Mansehra. As if this was not enough, he also burnt parts of her body with a hot iron.

Speaking at a news conference on Tuesday, Gul Shifa said her husband Alamzeb subjected her to mistreatment because she was trying to walk out of a bad marriage.

In her complaint to the DPO, the 20-year-old from Ahal village said she was 18 when she was married off to Alamzeb, son of Abdul Rehman, from Karmang village.

Soon after tying the knot in August 2014, she said her husband started physically abusing her. She went back to her parents’ house on two occasions, but each time Alamzeb convinced Gul Shifa’s father to send her back home. A jirga was also convened to address the matter and decided against Gul Shifa’s separation from her husband.

However, the physical abuse resumed in February 2016 and again the hapless woman saw no other route but to escape. Fearing she may be sent back into the abusive relationship, Gul Shifa chose not to go back to her parental home.

She reached Gandiyan Bridge, a few kilometres from her house, by foot.

“Tired of the constant walking, I decided to rest under a tree for a few minutes,” she said. “That is when a police van stopped near me and the personnel took me back to my husband’s home after questioning.”

Gul Shifa said her husband severely beat her again when she returned home.

He then convened a jirga to determine if his wife had maintained any illicit relations.

When there was no evidence of any wrongdoing on her part, Alamzeb took Gul Shifa to Karachi where he locked her in a room and beat her day in and day out, trying to force a confession.

In the first week of March, 2016, Alamzeb and his brother Rafique came to her room and again tried to force a confession. After Gul Shifa screamed for help, they both held her tightly and first shaved her head. Later, the accused chopped off her nose.

“They also burnt my body parts repeatedly with a hot iron,” she said. The brothers even denied her access to a medical facility as they feared legal action. They tried to provide treatment for her various cuts and bruises.

To a question, the woman said both the brothers had gone out to a market in Karachi when she escaped and managed to reach her parents’ home back in Ahal village. When she spoke of her nightmare, her family took her to the police station, but officers refused to file a case as the offence was committed in Karachi.

However, she then proceeded to the district police officer who ordered that an FIR should be registered, and arrest of the suspects.

The police sent her for a medical examination and said a case would be filed after the results are obtained.

They said Alamzeb, who was also back in the village from Karachi, was on the run, while Rafique had been arrested.