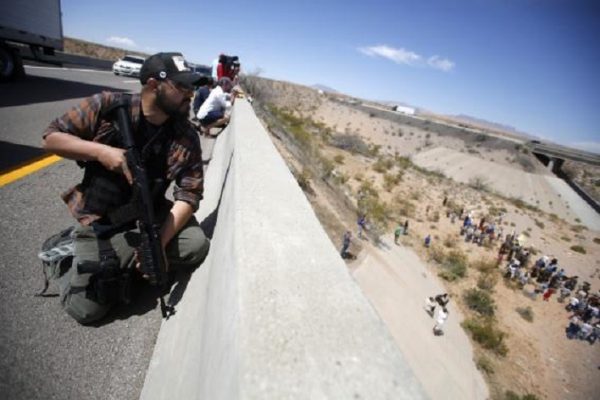 Eric Parker, known as “The Man on the Bridge,” or for those who accept the Government’s narrative, “The Bundy Ranch Sniper” provides a first-hand account of what happened on Saturday, 12 April 2014 when BLM agents ceased operation of their roundup of Cliven Bundy’s cattle. Contrary to the position of the Government, prosecuted by the US Attorneys, Parker outlines how the incident on the bridge was not, in fact, an armed assault as the Government alleges. His version of the story illuminates the watershed nature of this case as a landmark decision as it relates to Government overreach and Constitutional Rights. Everyone should be closely following the development of this case as its outcome has substantial implications for individual liberty.

The Government’s Criminal Indictment alleges that Parker was complicit is a massive, clandestine organized conspiracy to utilize the threat of force to assault, impede, extort, and otherwise threaten Federal Officers into retreating from the execution of a lawful court order. In their Memorandum Supporting Pretrial Detention, the Government alleges that Parker traveled to Nevada with the express intent to act as a gunman/sniper in Cliven Bundy’s unlawful attempt to secure cattle from Federal roundup. This position is of strict, narrow interpretation based upon a sliver the entire breadth of facts and evidence.

Parker outlines why he and two other associates traveled to Nevada on Friday, 11 April 2014. Contrary to the Government’s position, he did not take position on the bridge to threaten the use of force to help free Cliven Bundy’s cows. According to Parker, the Sheriff had already told Bundy that the operation would cease and that the cows would be released.

Parker, along with hundreds of others, simply proceeded to the bridge to observe the end of the entire incident. From there, Parker outlines how Federal Agents needlessly and recklessly escalated the situation to the point where he, and others, believing that they and protesters in the wash below could be unlawfully subjected to lethal force, took a defensive posture.

Parker touches on how the situation at the Malheur Refuge in Oregon is related to the Bundy Ranch incident. The Government is imprisoning vocal, outspoken political dissidents for the purpose of suppressing, through fear and intimidation of prosecution, the lawful exercise of rights when that exercise stands in opposition to the prerogatives of the Federal Government. Convictions in this case, and for the other co-defendants, could set a dangerous precedent going forward for people who exercise Constitutionally guaranteed rights.

Listen to Parker’s version of the events that day, his explanation of the relation of the Malheur Refuge incident in Oregon, his assessment of what the Government is doing to maneuver for maximum opportunity to seek conviction, and what that means for all of us going forward.

Eric Parker, a husband and father of two young children, is a political prisoner whose case will be a watershed for all who esteem the virtues of liberty, limited government, and Constitutionally protected rights.