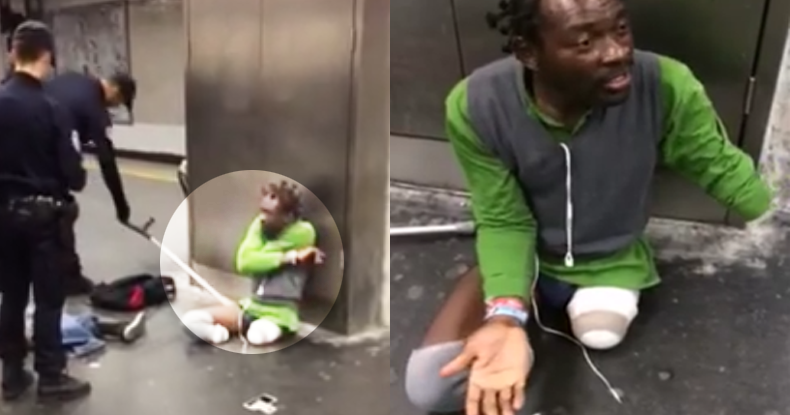 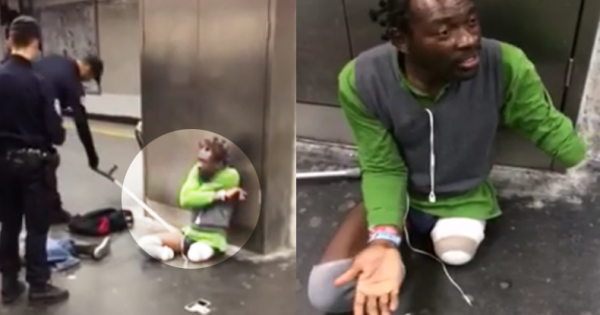 A triple amputee was left brutalized and humiliated after a police search on a train platform left him laying on the ground, struggling to re-attach his prosthetics.

Social media has erupted in outrage after video of the incident was posted to Facebook this week. The video was first posted by Jean-Didier Bakekolo, who described it as a show of “unprecedented brutality.”

“I explained them several times it was prosthetic…They insisted on searching me. I felt completely humiliated,” the victim, François Bayga said.

Bayga, leads an active life despite his physical disabilities. According to photos on his Facebook page, he enjoys playing rugby and is a member of the wheelchair rugby club CAPSAAA-PARIS.

The incident was filmed at the Paris Gare de Lyon railway station.

Bayga told France 24 that he found himself witnessing a “police search of exceptional brutality.”

Bayga explained to the French News station what led up to him being left in such a despicable manner by a group of public servants.

I was looking for the train to Gare du Nord. On the platform, three policemen were directed to me. They asked for my papers so I removed my backpack and I showed them. But I do not have my papers, I live in France but my request for documents is still pending in the prefecture.

Within moments of asking for his papers, police accused the triple amputee of stealing a phone.

I started to get irritated, I did not understand what they wanted. I was pinned against the wall and while I struggled one of the policemen pulled my leg. He wanted to know what I had on me, I told them many times “that are prostheses.”

Officers apparently thought they were dealing with a criminal mastermind, so they refused to believe him and demanded that he show them what was in his pants.

I then removed everything. I sat on the floor to show them that they had got what they wanted. The man filming made me signs that I am calm, not to aggravate the situation. The police found out my business and then they left. Fortunately there were witnesses to help me otherwise the police would have left me standing there, that’s the worst. A passerby helped me put my stuff on me. I felt completely humiliated.

On Thursday, police announced they were investigating the video.

A petition has been started on Change.org calling for the immediate suspension of the officers involved and has already been signed by over 60,000 people.

The petition reads: “There has been a lot of police violence in recent weeks and we thought we had seen everything. But here we hit rock bottom.”