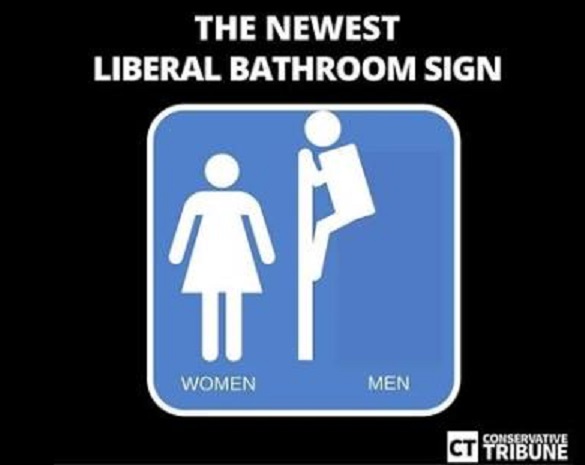 Fox News reports, May 9, 2016, that faced with a Monday deadline set by the administration to respond to its demand that North Carolina either scrap its “bathroom” law (House Bill 2), because it allegedly violates the civil rights of so-called “transgenders”, or face legal action and risk losing federal funds, Governor Pat McCrory filed a lawsuit yesterday against the Department of Justice (DOJ).

McCrory said he had asked the DOJ for an extension, but was given only until the close of business Monday: “I don’t think that three working days is enough time for such a pretty big threat. It’s the federal government being a bully, making law.” McCrory also said he doesn’t have the legal authority to change laws and that the expectation that he can is “unrealistic.”

House Bill 2, the Public Facilities Privacy & Security Act, was passed in response to Charlotte, NC’s “nondiscrimination” ordinance that allowed transgenders to use public bathrooms of the sex with which they identify. House Bill 2 requires transgender people to use bathrooms that correspond with the sex on their birth certificate, instead of what they imagine themselves to be. The state law also blocks local governments from establishing their own “bathroom” rules, as well as limits state anti-discrimination protections for lesbian, gay, bisexual and “transgender” people.

Filed in U.S. District Court in the Eastern District of North Carolina, the suit states: “The Department [of Justice]’s position is a baseless and blatant overreach. This is an attempt to unilaterally rewrite long-established federal civil rights laws in a manner that is wholly inconsistent with the intent of Congress and disregards decades of statutory interpretation by the Courts.”

Note: Indeed, federal anti-discrimination laws prohibit discrimination on the basis of sex — which is a biological term, determined by an individual’s DNA/chromosome makeup — not of gender. The latter is what an individual thinks and identifies him/herself to be. In other words, gender is a psychological construct. Psychiatrists who are not insane because they have not succumbed to the Tyranny of Political Correctness, point out that there is no biological basis for so-called “transgenderism” and that “transgenders” are people laboring under a psychological disorder of body dysmorphism, wherein they have a distorted view of their bodies, similar to the body dysmorphism of anorexics who, although they are emaciated, perceive their bodies as fat and so starve themselves. See “American College of Pediatricians speaks truth on transgenderism“.

Speaking later at a press conference, McCrory said Congress should get involved and “bring clarity” to federal anti-discrimination provisions, and urged the court to intervene in the current dispute because “This is not just a North Carolina issue, this is now a national issue. We believe a court rather than a federal agency should tell our state, our nation and employers across the country what the law requires.”

North Carolina has been under assault by the PC Left for its bathroom policy, including:

McCrory warns that the Obama administration’s threat to sue and withhold federal funds if NC does not scrap House Bill 2 means the issue is no longer confined to North Carolina. He said “This is not just North Carolina,” arguing that every university that accepts federal funding is now in the same situation as those in his state.

Indeed, Politico reports that the Obama administration is expected to soon issue a federal law, involving multiple agencies, which will prohibit “sex-based discrimination” in federally funded education programs and activities.

Here’s how you can show your support for besieged North Carolina:

(1) Call or send an email or a tweet to Gov. Pat McCrory:

(2) Give North Carolina your dollars with tourism or mail-order shopping. However, boycott these NC businesses who have succumbed to PC tyranny by placing themselves on a so-called map of “safe bathrooms,” i.e., these are businesses that allow fully-biological males to use a girl’s bathroom: