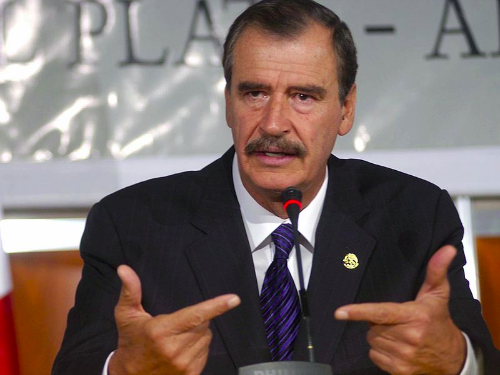 Lately, former Mexican President Vicente Fox has been expressing some rather schizophrenic thoughts about Donald Trump. After saying that Mexico would never pay for his “f***ing wall,” he later apologized and invited Trump to visit Mexico, but not before flipping Trump the bird during a photo-op.

His latest comments on Trump may be his most bizarre. He appeared on the Kickass Politics podcast, and claimed that a Trump presidency “could take us to a war – not to a trade war.”

Aside from the absurd notion that Mexico’s corrupt second-rate army and disarmed population could ever stand up to the US Military, Fox’s weird thoughts about his own people have to make you wonder. They are like jalapeños? They can jump walls and swim rivers? In less than a minute, he managed to reduce his own people to a stereotypical joke you might hear from a hack comedian.