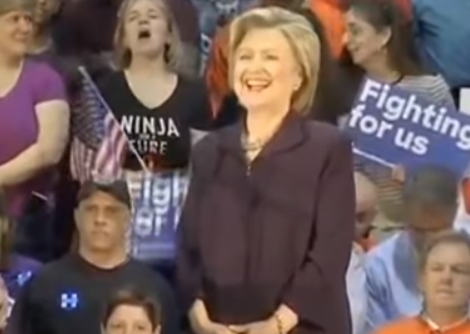 The person hosting this rally in Camden, New Jersey for Hillary Clinton displayed a weird form of self-censorship when she began to say the Pledge of Allegiance line “one nation under God,” but then caught herself, removing God and stammering straight to “indivisible with liberty and justice for all”.

Hillary thought that was great and they all had a good cackle.

Maybe there’s someone else Hillary would’ve liked to be named there instead?

This does go really well with her devil horns from that one speech she gave at a church no less.

Hillary just loves a good cackle. For more on that, see also WHY DOES HILLARY CLINTON ALWAYS CACKLE WITH GLEE AT VIOLENCE, HORROR, AND DEATH?