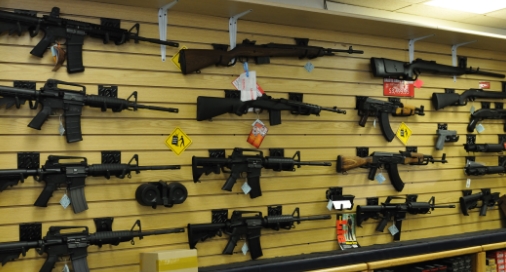 As the government reports a major increase in job growth over the last quarter, its ironic that a percentage of that growth is due to the increase in gun sales that resulted from the administrations push for gun control. At this point, the American people understand that gun control is not about gun safety: it is about control, period. Honestly, the gun control debate can be used to sum up the exact differences between the left and right wing worldviews. Those on the left generally believe we are too stupid to govern our own affairs, and an intellectual elite is needed to dictate how we live our lives. The right, on the other hand, believes in principles like individual liberty and personal responsibility and that people are best off when left to self-govern. What most people fail to understand is that the left has been mastering the manipulation of human behavior for the past century, and most of our reactions, whether we like to admit it or not, are the result of purposefully fed stimulus designed to force us to react in a way that pushes us towards the desired end of total control. As I wrote in Psychology: Silent Weapon of the Elites Pushing us all Toward the Same End, the social controllers have discovered that manipulating the environment around us can force us into predictable behavior patterns that can be studied and counted on to produce the same results. The environment, unbeknownst to most of us, is used in more ways than can be imagined to gain social control, especially when it comes to pushing and gaining support for certain issues. So they like to believe.

The television media is playing a huge role assisting the Obama administration demonize certain people, promote or denigrate certain political issues, and give the overall appearance that the Democrat agenda is widely accepted and the Conservatives are downright hated. While it may be commonly known that the mainstream media is extremely biased, this will matter little in one hundred years, after history has been rewritten by the progressive liberals. No matter the issue, whether it be guns, race, the economy, immigration, or terrorism, the media is there to give the appearance that the majority of Americans disapprove of Conservative attempts to stop the democrat/communist agenda. This, of course, is a method of social control. Most people can understand the concept of Republican politicians going along in an attempt to avoid being labeled as a racist or uncompassionate towards people’s needs. This technique is very effective, perhaps so much so that Paul Ryan felt compelled to pass the recent omnibus spending bill out of fear the left would make another commercial portraying him throwing granny from a cliff over proposed Medicare cuts. While many people may be wondering what new information is being presented here, many have no idea just how refined this technique is and how much of a science manipulating human behavior has become.

In this article, I am going to continue explaining our current political environment through B.F. Skinners “Beyond Freedom and Dignity,” in an attempt to make readers aware of just how “inhumane” the left wing worldview really is and the extent to which they are attempting to manipulate us.

As described in the first paragraph, there is a distinct difference between the left wing view of man, and the right wing view. While it is a sufficient comparison enabling readers to understand the difference on a fundamental level, it in no way does this difference in worldviews any justice. The difference is purely scientific, and once this is understood, everything else falls into place. For instance, on page 101 of “Beyond Freedom and Dignity” B.F. Skinner explains this difference from a psychological perspective and it is completely Darwinian/Marxist in nature. He refers to man’s ability to freely choose his behavior as the “Pre-Scientific” view of mankind. Pre-Scientific man was responsible for his own successes and failures; he was able to decide for himself and act based on his own beliefs.

A political view that sought to make the most of man and build upon his growth, would likely refer to these attributes as the “post-scientific” view of man; however, this is not the case. Science has learned to manipulate and control behavior, and this has drastically changed the way science views mankind. It is now believed that if an individual cannot be molded and made to accept certain behaviors and beliefs, the individual is defective. This attitude is what led to the deaths of nearly 100,000,000 people in the twentieth century, as communist dictators brutally murdered those that opposed communism because it was believed that only defective people could not be brought to see the reasonableness of social control.

Skinner writes that the more that is learned about the effects of the environment on human behavior, the less it can be attributable to any “autonomous” controlling agent. This simply means that man is not in control of his behavior, and through manipulating the environment, his behavior can be controlled. Consider Skinners thoughts on “post”-scientific man.

This comparison to what Skinner describes as pre-scientific man and scientific man highlights perfectly what it is we are up against when considering the left’s agenda. This, however, is not all. On page 91, Skinner describes how effective manipulating the environment to form public opinion truly is. This brings us back to our example with Paul Ryan and throwing granny from a cliff. The fear of disapproval, it has been found, is a powerful motivator when seeking conformity. Consider the following statement.

People who get along together well under the mild contingencies of approval and disapproval are controlled as effectively as (and in many ways more effectively than) the citizens of a police state. Orthodoxy controls through the establishment of rules, but the mystic is no freer because the contingencies which have shaped his behavior are more personal or idiosyncratic. Those who work productively because of the reinforcing value of what they produce are under the sensitive and powerful control of the products. Those who learn in the natural environment are under a form of control as powerful as any control exerted by a teacher. (Skinner, 91)

So, what does this have to do with our current political environment and the push for gun control? Well, the environment has been changed to give the impression that we live in an out of control, dangerous society where leaving your house means risking getting shot in the head. Or at least, this is how they try to portray the environment in order to change your behavior. In America, liberty can only be lost when the people consent to it; and in a nation where liberty works and everybody is living peaceful, prosperous lives, there is little reason to give up freedom in order to feel secure. There is little doubt, after understanding the belief that human behavior can be manipulated through the environment, that social controllers are hard at work engineering environmental changes to bring about the type of behavioral controls they would wish to impose upon us. Consider Cass Sunstein, for instance; he believes, and has stated so in his book “Nudge,” that human beings should be “nudged” into behaving certain ways that would be better for the planet, better for health, and help bring about happiness. Again, the common theme here is that people do not know what is best for them, and only with an enlightened, intellectual elite lording over us can we expect to live prosperous, healthy lives.

The only problem the left has is that people are not buying it. People do not want to be controlled because, despite what the left believes, we were created, by our creator, to be free, plain and simple. The left simply does not understand the “pre-scientific” view of man because everything for them has to be categorized and boxed away in easily-controlled files. When Josh Earnest said the White House had no idea why Americans were buying so many guns, he wasn’t kidding. The left has no way of comprehending why Americans have not abandoned their outdated ideas of freedom and the rights to protect the ones we love in favor of more government control because, for all of their efforts to manipulate and control our behavior through changing the environment, they have forgot to analyze what it is they are so afraid of. Their quest for total control represents little more than a fear of being unable to control themselves. We are just the guinea pigs. Given the fact, however, that the current administration has demonstrated an unshakable resolve when it comes to creating chaos to gain more power, the possibility that Americans refusal to go along with the gun control agenda can be used against us is highly likely. They have already labeled most of us as terrorists and extremists, enacting gun control and playing on the fact that the majority of patriots will not go along will only aid in the efforts of creating a hostile environment which will be used to further “nudge” the people to change their behavior. In effect, whether the majority of people buy it or not will matter little; they are successfully changing the environment, forcing us to respond in defense of our inalienable rights. They are using the environment and the issue of gun control to turn patriots into terrorists in the minds of the unwashed masses. And for some, it is working.