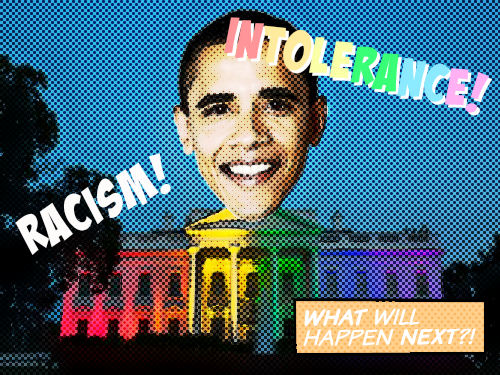 So this is happening.

The Obama administration is telling public schools that they must allow transgender students to use bathrooms and locker rooms consistent with their gender identity. The directive is in formal guidance being sent to school districts Friday by the departments of Education and Justice.

The letter does not impose any new legal requirements, but federal officials say the guidance is meant to clarify school districts’ obligations to provide students with nondiscriminatory environments.

Notice that “the letter does not impose any new legal requirements” because the president can’t impose legal requirements directly onto schools like a dictator or a king, but that didn’t stop ABC7 from Tweeting “Pres. Obama to order public schools to allow transgender students to choose own bathrooms.”

Throw aside the bathroom issue for a second. How can Obama really order schools to do anything? This kind of thing violates the separation of powers in just the way you know Obama loves to do. And inevitably this will get tied to the funding at these schools, which is really all most schools actually care about these days anyway. This new development comes on the heels of this:

AG Loretta Lynch earlier this week announced that the DOJ is suing North Carolina and threatening to withhold federal funding over the state’s new bathroom law, which forces public schools, colleges, and government agencies to — prepare yourself for this — designate bathrooms to be used by people based on their biological sex.

I know. I know. Crazy right?

Well Lynch thinks so; she compared the new law to Jim Crow laws.

Meanwhile, the DOJ has the time and inclination to sue North Carolina for being sooo evil as to force the potential 0.37 percent of transgender North Carolinians to use the bathroom designated for their biological sex, but the department just can’t seem to get around to indicting Hillary for, well, any of the laws she’s broken, of which there are many and that affects everyone (especially if she becomes president).

And that’s the country we live in.

This whole thing reeks of obedience training. Social engineering and bullying via political correctness to get the 99.63 percent of everyone else to bow down, no matter how uncomfortable it might make them, to the will of the 0.37 percent…

Again, please refer to this comment left on an article where people were arguing about these laws:

I’m gay. I know a man when I see one. A woman who cuts off her breasts and grows a throat beard is not a man, she is a woman with a psychological disorder, known as gender disphoria. And I do not want to share a locker room or a shower with a woman. And YES, sorry libs, gender dysphoria is a mental disorder. That is the only reason insurance will cover the surgery–as treatment for a mental problem.

People with the disorder known as gender disphoria deserve love and compassion, but that does NOT mean that the rest of us will be bullied into showering with hairy women, or men with breast implants.

Sex is biological and cannot be switched. Neither can gender. Gender ROLES or gender NORMS may be a social construct, but gender itself is BIOLOGICAL and IMMUTABLE.