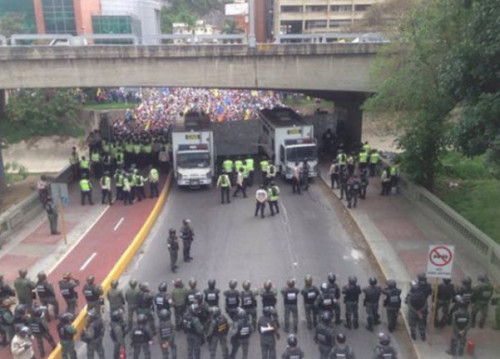 As AgainstCronyCapitalism reports, the pic above is of hungry Venezuelans protesting that they do not have enough water or electricity, and that their children are dying from lack of food and medicine — in a country with more oil than Saudi Arabia, after years of two-cent gasoline and free housing socialism. The government has stolen all the money and now threatens peaceful protesters with bombs, or hauls them to prison and tortures them.

3½ months ago, FOTM posted on Venezuela’s crippling 720% inflation and how the country’s supermarket shelves are bare and people must wait in long lines for rations.

Since then, the situation has only worsened further — people in city streets are hunting down dogs, cats, and pigeons for food. According to the PanAm Post:

Through Twitter, Muchacho reported that in Venezuela, it is a “painful reality” that people “hunt cats, dogs and pigeons” to ease their hunger. People are also reportedly gathering vegetables from the ground and trash to eat as well.

The crisis in Venezuela is worsening everyday due in part to shortages reaching 70 percent […] six Venezuelan military officials were arrested for stealing goats to ease their hunger, as there was no food at the Fort Manaure military base.

And as desperate people increasingly turn to crime, their victims are exacting vigilante mob justice.

As reported by the Daily Mail, Roberto Fuentes Bernal, 42, was caught trying to mug passersby in the streets of Caracas. Before police arrived at the scene, the crowd took the law into their hands by surrounding Bernal, taking turns beating and kicking him, then burning him alive. Bernal was taken to a nearby hospital and is receiving treatment for burns covering 70% of his body.

I wonder what happened to the $2 billion “family fortune” Chavez had looted?

Just remember that this is the socialism that good ol’ Bernie Sanders wants for America.