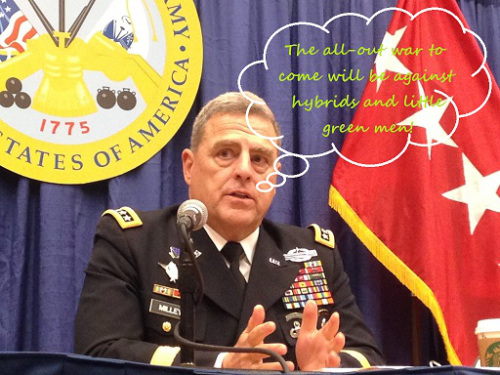 This is one of those pieces of news to which the appropriate response is “WTF?”.

When I say “hybrids” or “little green men,” what immediately comes to your mind?

On April 21, 2016, at the 100th anniversary of the ROTC program held in Norwich University, U.S. Army Chief of Staff Gen. Mark Milley delivered the keynote address, “Leading Through Complexity”.

Beginning at about 33 minutes into his speech, Gen. Milley said something rather curious. After referring to World Wars I and II, Milley warned the ROTC cadets to be prepared for a coming total war — in effect, World War III — in which the U.S. military will fight not just terrorists, but “hybrid armies” and “little green men”.

Below is the relevant clip, followed by my transcription of his words, followed by a video of his full speech.

Michelle Tan of ArmyTimes sought to dampen all talk of UFOs with this:

Military officials batted down any talk of aliens and intergalactic war.

The phrase “little green men” typically refers to foreign troops or paramilitary forces who dress in green attire instead of traditional military gear, the officials said.

“It does not mean fighting troops from outer space,” the officials said.

The unnamed “military officials” insist that by “hybrid armies” and “little green men,” Gen. Milley was referring to “a revanchist Russia, an aggressive China, a provocative North Korea and Iran, and ‘any other multiple contingencies that may arise.’”

The term “little green men” was used in a non-extraterrestrial, military context as recently as 2014 when Russia annexed Crimea, to refer to men wearing unmarked green uniforms. Reporters in Russia and Ukraine alike used the term to refer to the color of the uniforms and the men’s unconfirmed origin, the BBC reported.

Meanwhile, the military has talked for years about preparing to face a hybrid threat, which can consist of regular forces, criminal elements, terrorist groups, cyber threats and more, all at the same time. This complex battlefield signals a shift away from the more traditional force-on-force battles of the past.