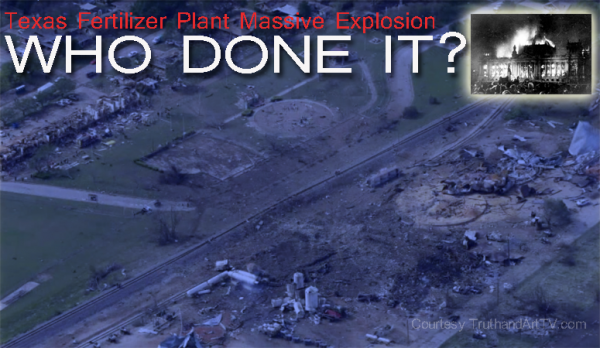 Sometimes conspiracies are truly forgotten when there are so many other State crimes and conspiracies to choose from. Such is the case with the Waco Texas fertilizer plant “explosion” of April 17, 2013. I’m talking about the Texas fertilizer plant explosion which was conveniently buried in the immediate aftermath of the April 15, 2013 Boston bombing. I’m sure many have forgotten about this event in the same way they don’t remember or have completely forgotten that two days earlier, on the very same day of the Boston bombing “event” a wave of bombings and shootings took place in Iraq just before their elections leaving at least 75 people dead and hundreds injured. The mainstream media conveniently gave little to no attention to this story as the Boston bombing event was selected as the featured story we were supposed to be thinking about at the time.

Meanwhile in Waco Texas 2 days later, on the evening of April 17th, a fertilizer plant caught fire and was being consumed in flames when some 22 minutes later a mighty suspicious massive explosion took place; an explosion captured nicely on camera by nearby residents that was so loud and so bright that many have suspected it was some sort of missile strike. Sounds crazy? You decide:

Now let’s listen in to what Nevada governor candidate at the time, David Lory VanDerBeek, had to say about this. The governor candidate breaks down some of the features of this evidence very nicely showing you the trajectory of the energy being provided by the missile. After seeing this video no one should wonder why he had no chance at winning the governor race.

The plant was owned by Adair Grain Inc. a family owned food plant which also goes by or is closely associated with “Texas Grain Inc.” a competitor of Monsanto who had filed a lawsuit against Monsanto accusing Monsanto of artificially inflating the price of their Roundup herbicide. This additional explosion to this day is highly suspicious; and now that the mainstream media is briefly covering this story it’s a good time to examine this event a bit more closely.

According to mainstream media sources the federal government “investigators” claim the factory was an explosion waiting to happen:

The source of the explosion was ammonium nitrate stored in a wooden container at the plant, investigators have said.

But if we examine the explosion claim we must take into consideration that the Adair Grain fertilizer plant reported to the EPA a very different picture:

The fertilizer plant that exploded Wednesday night in West, Texas, reported to the Environmental Protection Agency and local public safety officials that it presented no risk of fire or explosion, documents show.

West Fertilizer Co. reported having as much as 54,000 pounds of anhydrous ammonia on hand in an emergency planning report required of facilities that use toxic or hazardous chemicals.

But the report, reviewed Wednesday night by The Dallas Morning News, stated “no” under fire or explosive risks. The worst possible scenario, the report said, would be a 10-minute release of ammonia gas that would kill or injure no one.

The second worst possibility projected was a leak from a broken hose used to transfer the product, again causing no injuries.

The plan says the facility did not have any other dangerous chemicals on hand. It says that the plan was on file with the local fire department and that the company had implemented proper safety rules.

The fire has been ruled as an incendiary. This means this fire was a criminal act.

Elder then says that numerous pieces of evidence were taken into account including, witnesses, images and video footage. But was the video evidence really taken into account? Even more intriguing, Mr Elder has announced a $50,000 award for information leading to the capture of the arsonist, so if anyone wants to take him on please do. I can’t help but to be reminded of the 1933 Reichstag fire false flag in Germany and how a patsy of choice was afterward chosen and executed in the period that followed.

Let’s consider some additional ironies and peculiar accounts surrounding this explosion. According to the reported investigation conclusions:

This conjures up memories of the government claims that on 9/11 WTC 7 was packed with “diesel fuel tanks” which they would then use in an attempt to sell the theory that office fires alone could destroy the building in the controlled demolition manner in which it was destroyed.

The problem with looking at the entire story, looking at all the evidence and then listening to the government “investigation” statements (or lack thereof) is that the whole story doesn’t fit like it should, and that alone should lead us to wonder, was the fertilizer plant purposely struck with a sophisticated military missile to send Texas Grain Inc. a message? Can Ammonium Nitrate alone cause such a wide and deep crater in the damaged area? And is the quality, direction and trajectory of the explosion consistent with an explosion originating from the plant as the government would have you believe?

Suspicions run high that this was not only a classic military style (think 9/11 Pentagon style) attack on the plant but, specifically, this may have involved a new “Advanced Hypersonic Weapon” (AHW) developed by the Army in 2011 seen here. The video below explains this possibility more in-depth. Again, you decide.

When analyzing this let’s keep in mind that conspiracies are now the norm and today it is well within reason for any critical thinker to suspect government conspiracy as a reasonable possible explanation. It is also incumbent upon us to consider all evidence including the irony of this story being buried at the height of the Boston bombing event. That they are just now briefly talking about this explosion after 3 years of hiding the story is suspicious in itself. The multiple video analyses above demonstrating reasonable probability of a sophisticated military style missile strike should matter to everyone. If true, this constitutes another blatant murderous act of violence of our government against its own people potentially on behalf of its global organized crime cartel partner Monsanto who is known to work with Blackwater/XE.

Now that investigators are officially ruling this event as a “criminal act” it will be very interesting to see if they produce a patsy of their choice in the future (Reichstag fire style) to throw off anyone suspicious of government activity in this crime.

It sure does seem like a criminal act to my eyes, and as usual no one in the mainstream media or the usual pre-selected government “investigative” body is looking for or even suspecting that the plant was ultimately pulverized by a missile strike. We all know that government investigative bodies never even look for possibilities that imply that the State is involved in the crime. So this phony search including their phony $50,000 reward will never lead to any real justice.

Don’t think for a moment the ruling class wouldn’t commit a crime like this to protect their interest and send a message. These are ultimately the same people who funded the attacks in Iraq on April 15, 2013 and organized the Boston bombing “event” on the same day. In order for truth seekers to remain vigilant and to stay on top of government crimes and conspiracies they need to take events like this seriously and do their own research. It’s not about being paranoid, it’s about believing your own eyes and ears, looking for patterns, exercising critical thinking, and maintaining a clear overall awareness of the big picture.