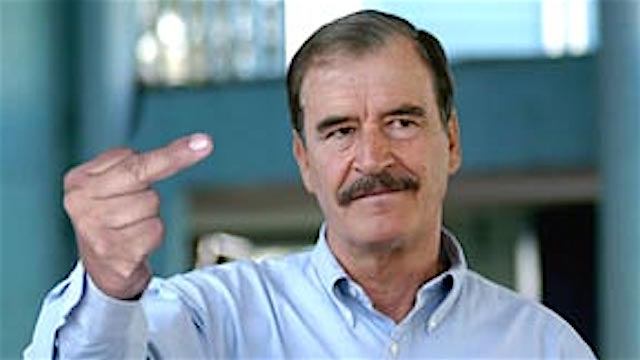 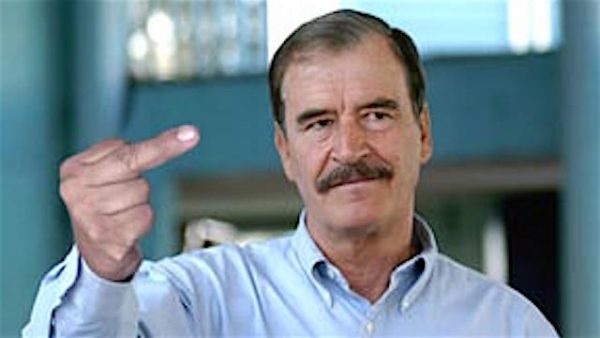 Vicente Fox (twitter) is two important things: the former President of Mexico, and the former head of all Coca Cola operations in Mexico.

Over the last few months, he’s made several statements about Trump and immigration:

“I’m not going to pay for that fucking wall.”

“He [Trump] is the hated gringo because he’s attacking all of us, he’s offending all of us, I mean imagine – that could take us to a war – not to a trade war…Don’t play around with us. We can jump walls. We can swim rivers. And we can defend ourselves.”

Regardless of what you think about immigration or Trump, there are a few points to remember about Vicente Fox and the history of Mexico.

First, Fox, on his mother’s side, is Spanish. As in: she comes from Spain.

From biography.yourdictionary.com: “He [Fox] was born July 2, 1942 in Mexico City but was raised on a communal farm in the state of Guanajuato near Leon. His father was a rancher of Irish descent and his mother came from Spain.” (Oh, wikipedia update: “The family was unaware of its German origins and they believed the Fox family [on Vicente’s father’s side] had their origins in Ireland until it was discovered otherwise later in Fox’s life.”)

What difference does that make? The bottom-line argument for UNLIMITED Mexican immigration is based on history: namely, the Mexican-American War of 1846-48, and the peace treaty that surrendered Mexican California, plus territories east of California, to the United States—and solidified the US hold on Texas.

So the current immigration flood has the goal of “taking back what rightfully belongs to Mexico.”

Except for one other historical fact: starting in 1519, Mexico no longer belonged to the native Aztec population. It was grabbed by force. The Spanish conquistadors won a war and overthrew the Aztec empire.

So if you want to argue history, “native Mexicans” aren’t “winning back Mexico for themselves.” If immigration means winning, it’s on behalf of the men who took control of Mexico: Spanish conquerors.

Again, on his mother’s side, Vicente Fox is Spanish. He isn’t a “native Mexican.” Not even close.

Indeed, native Mexicans have been buried at the bottom of the political structure in their own country for five centuries.

But Vicente Fox has other matters to explain as well, and they have to do with the effects of the Coca Cola Company on native Mexicans. Remember, he was, for a time, the head of all Coke operations in Mexico. Here, from a stunning article at mexicolapchs.blogspot.com (“Coca-Cola’s Exploitation of Mexico,” 5/8/2011), is another piece of history, this one more recent:

“While having a tight grip on the native people, Coca-Cola managed to exploit Mexican land and its natural resources. ‘Coke is also widely produced in Mexico, an arrangement that is threatening the country’s water supplies and undercutting indigenous control of natural resources. It takes three cups of water to make one cup of Coke’… As Coca-Cola is using up Mexico’s water supply to produce Coke, they are limiting water for the native people, forcing them to consume more Coke. Health issues like diabetes and obesity began to worsen as more Coke was consumed because of the sugar and caffeine intake.”

“Without natural resources to provide a healthy diet, the Mexican people resorted to drinking only Coke which caused a rise in diabetes and obesity. Due to Coca-Cola’s economic venture, Mexico must cope with its depleted resources, disintegrating government, and mistreatment of the people. If Coca-Cola continues their profit making schemes, the people of Mexico will have no control over their own government and land. Their water supply will ultimately be destroyed and the health of the people will plummet.”

If Vicente Fox is arguing on behalf of “true Mexicans,” he should look to his own past, and the grotesque effects his company has had on that population.

If you opened up the major media to authentic original Mexicans, with no Spanish descendants of the conquistadors on board, the first thing the native Mexicans would begin talking about is the 500-year suppression of their rights and lives in their own land, right down to the present day. They wouldn’t be talking about immigration to the United States.

The native Mexicans would have very interesting things to say. Their statements would cut to the bone of Mexican history, the real history. Not the laid-on Spanish history.

And if justice were the objective, it would begin right there.

It definitely doesn’t begin with anything Vicente Fox has to say.

The argument for unlimited immigration, based on history, is spurious from the get-go. And if you want to go back to the native Aztecs, even there you’re talking about people who took over large territories and populations by conquest.

Who the Aztecs’ native Mexican victims were, at that time, I’ll leave for scholars and historians to sort out. Whoever they were, if you can find them in Mexico today, they have zero political or economic power. They’re at the bottom, where they’ve lived for a long, long, long time. And their need starts with what the leaders in Mexico (not the US) have been doing to them:

You just might find a few descendants of original Mexicans growing corn in their native land. That’s possible. And if you did, you’d immediately run into the effects that NAFTA, the 1994 Globalist treaty, has had on them. It put 1.5 million of them into bankruptcy, because NAFTA permitted the US to export cheap corn to Mexico. That’s why many of those farmers have been crossing the border and coming up into the US.

Yes, NAFTA, the treaty that Vicente Fox has called “a miracle,” and a “total success.”

The man can tap dance. I’ll give him that.

Coda: In case you think giant tracts of land in California, with their sprawling estate villas, were once owned by original Mexicans, from whom Imperialist Yankees stole those properties in the settlement of the Mexican-American War, think again. There was a time (19th and early 20th century) when remaining wealthy Mexican families in California were giving each other islands off the coast, as wedding presents for their sons and daughters—but these were really Spanish landowners. They were the descendants of 1519 Hernan Cortes, Juan Diaz, Andres de Tapia, Garcia del Pilar, Francisco de Aguilar, Pedro Alvarado, and their merry band of marauders who stole central Mexico, spread their influence, and kept the native population under their rule, deep under their rule.

I once lived on Alvarado Street in Los Angeles. Only decades later did I realize this name was no holdover from, or recognition of, Mexico. It was apparently a reference to Juan Bautista Alvarado, Governor of Alta California (1836-42). It pointed to “Spanish Mexico.” As in: Spain.

The people who want unlimited immigration from Mexico to the US should keep that in mind. Arguing from history brings up some unpleasant truths.

That tells you something about who has really been running Mexico since the early 16th century.

It isn’t the native Mexicans.