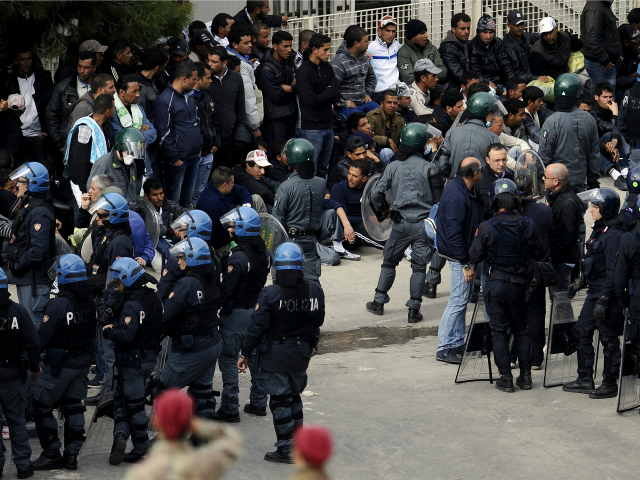 Not that you need me to tell you this — but real war refugees don’t behave this way. Violent, vicious predators — destroying the facilities the host countries provide to house them.

This is a pattern — Greece, France, Germany,  Austria and Italy.

A group of Tunisian migrants set fire to the main pavilion in a Lampedusa refugee welcome center Tuesday night, causing severe damage, after learning they would be repatriated to their home country, according to reports.

The fire enveloped the first aid and reception center of Imbriacola in Lampedusa, which presently houses some 530 asylum-seekers, though no injuries have been reported. This is not the first time that migrants have set the pavilion ablaze. Similar acts of arson occurred in 2009 and then in 2011.

After hours battling the fire, which was set around 10:30pm, teams of firefighters stationed on the island were finally able to get the blaze under control in the early hours of Wednesday morning.

“The situation is unclear. But luckily all the guests are safe, no one was hurt,” said the director of the center, Rossana Perri.

The four Tunisian migrants suspected of starting the fire were stopped as they walked away from the pavilion moments after the building went up in flames. The property, which had been rebuilt after the first two fires, is seriously damaged.

On Tuesday two separate groups of Tunisian migrants had landed on the small island, which as Italy’s southernmost point is only 70 miles by sea from the African nation of Tunisia. In the morning of a group of 14 Tunisians arrived, followed by another 35 who were picked up by the Italian Coast Guard later in the day.

Reports suggest that in recent weeks tensions had already been growing inside the Lampedusa welcome center, linked to the refusal by a group of African migrants, mainly from Eritrea and Yemen, to submit to identification and registration procedures including the taking of fingerprints.

During this time, dozens of the migrants had held a protest in the main town square in front of the Church, camping out and staging a hunger strike that lasted four days.