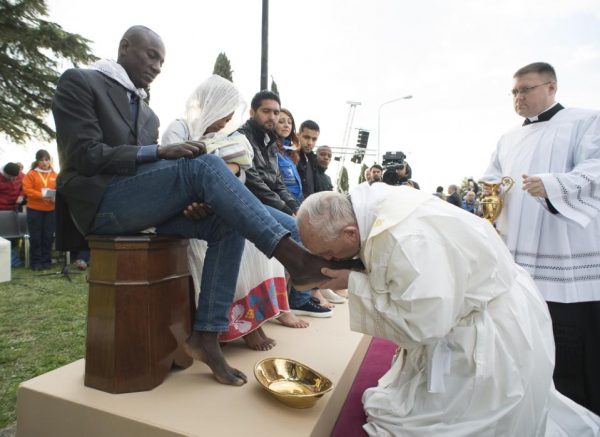 The Pope continues his jihad on the truth and his relentless proselytizing for Islam. I have been covering the jihad daily since 9/11, and I can tell you straight up that there has never been a terrorist attack by radical Christians screaming “Jesus akbar!” or invoking the name of Jesus at any time. Ever. But there have been thousands of jihadist attacks on the West (and in Muslim countries).

This is an attack on the good by the evil. The hatred of the good for being the good. The Muslim pressure groups in Europe must be rubbing their hooves in glee. They have their tool in the Vatican doing their work for them.

That the Pope would equate Christianity’s missionary call with the jihad shows that he doesn’t understand either one, and probably won’t even when the jihadis come knocking on his door.

Choosing his words carefully, Pope Francis recognized that the idea of conquest is integral to Islam as a religion, though he was quick to add that some might interpret Christianity in the same way.

In an extensive interview with the French Catholic daily La Croix published Tuesday, the Pope offered his thoughts on a number of issues ranging from French secularism to immigration to Islam.

Asked point blank what he thought of the widespread fear of Islam in the West, Francis replied that his impression is that most people don’t fear “Islam as such” but rather “Daesh [the Islamic State] and its war of conquest, drawn in part from Islam.”

The Pope went on, however, to acknowledge that the “idea of conquest is inherent to the soul of Islam,” while immediately adding that “one could also interpret the end of Saint Matthew’s gospel, where Jesus sends out his disciples to all nations, as the same idea of conquest.”

It wasn’t clear whether the Pope actually believes that Jesus’ mandate to his disciples to evangelize the nations was truly equivalent to violent Islamic jihad, or whether he merely said this in order to appear balanced and self-critical.

In the interview, Francis also wondered aloud whether jihadism wasn’t exacerbated by Western incursions into the Middle East, in countries like Iraq.

“Faced with modern Islamic terrorism, we should question the way an overly Western model of democracy was exported into countries where there was a strong power, such as Iraq,” he said.

“Or into Libya, with its the tribal structure,” he added. “We cannot move forward without considering that culture. As said a Libyan said some time ago: ‘We used to have Gaddafi, now we have 50 Gaddafis!’”

The Pope expressed his fundamental belief that “coexistence among Christians and Muslims is possible.”

“I come from a country where they live together in good familiarity,” Francis said. “The Muslims venerate the Virgin Mary and Saint George. In a country in Africa, I’ve been told that for the Jubilee Year of Mercy, Muslims wait in a long line at the cathedral to pass through the Holy Door and pray to the Virgin Mary. In Central Africa, before the war, Christians and Muslims lived together and must learn to do so again today. Lebanon also shows it is possible.”

Asked whether Europe should be accepting so many migrants, the Pope recognized that “it is a fair and responsible question because we cannot open the doors irrationally.” He then immediately shifted to the “basic question” why there are so many migrants in the first place.

As he has done on other occasions, the Pope said that the problems at the source of Europe’s migrant crisis are the wars in the Middle East and in Africa, as well as underdevelopment throughout the African continent. If there are wars, he said, that’s because there are arms producers—which is justifiable for defense—and above all arms dealers.”…