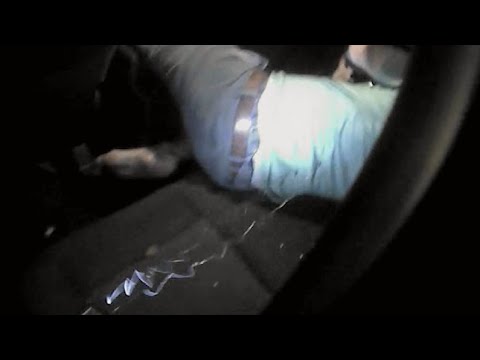 Coweta County, GA — American police have once against demonstrated that their agenda is not to protect and serve, but to dominate and control by any means necessary. On November 20th, sheriff deputies in Coweta County, Georgia were summoned to help subdue a man having a psychotic breakdown and ended up tasing him to death.

After months of keeping the video from the body cameras on the police officers under wraps, it was finally released on Friday to the NY Times.

Thirty-two-year-old Chase Sherman, together with his fiancée, Patti Galloway and his parents, Kevin and Mary Ann Sherman, were returning from a vacation. During a layover at the Hartsfield-Jackson airport in Atlanta, Chase started having hallucinations and acting agitated. According to his father, he “got nervous … about planes crashing, and he just didn’t feel comfortable on a plane. … He thought nobody recognized him. I said, ‘Chase, we’re fine. We’re going to get a car and drive home.’ He didn’t know where he was at.” So they rented a car to drive the rest of the way to their home in Florida.

Chase’s fiancée told his parents that he may have smoked “Spice”—also known as “synthetic marijuana”—before they had left on the five-day trip, which may have been the cause of the episode.

Chase’s father described what happened next:

“We got him in the car and we took off on I-85. Chase’s fiancée was driving and Chase was lying in the back with me. He had his head on my lap. He acted like he didn’t know where we were going. And then he jumped up and started a disturbance in the car.”

They pulled over, and Chase’s mother dialed 9-1-1, but the father told her to hang up, thinking things were under control. After driving again for a few more minutes, Chase “got more violent,” and they pulled over again and his mother again called 9-1-1.

“We were fighting, screaming, trying to calm him down. It was pretty horrendous in the car,” his father said.  “His fiancée jumped back to try to calm him down and she actually got bit. My wife told me just to hit him or something to try to get her arm loose. He let loose of the arm and the officers showed up.”

When the three deputies arrived, “they reached across me trying to get the handcuffs on him. I got out of the car and they told me to go back by the ambulance.” Deputies then instructed everyone else to exit the vehicle. During the ensuing struggle, Chase was tased repeatedly. “More officers kept coming and we think they kept tasing him,” Chase’s father said. “They were treating him like a rabid dog.”

The newly released body camera footage proves all the parents’ allegations to be entirely true.

As police arrived on scene the quickly run up to the vehicle. “Tase his ass!” the first deputy yelled to the second deputy. “Tase him! Hit him!”

Even after the deputies got handcuffs on Sherman, they acted as if he had some super strength and was going to kill them all.

“That’s a good way to get shot right there,” the deputy shouted, responding to Sherman allegedly reaching for his taser.

“I’ll tell you right now, you grab my taser again, it’s going to be on!”

“You’re not going to shoot him,” said Sherman’s mother. “You hear me?”

“You understand … this is for our protection,” the deputy barked back.

“Right now he is being combative. He tried to take my taser away from me, ma’am,” said the officer.

When Sherman did grab the deputy’s taser, he panicked, in spite of the prongs of the taser being deployed into the body of Sherman.

Eventually, Sherman runs out of steam and concedes. “I quit. I quit.” he says as the deputies continue to taser him.

“He’s good now. I got all the weight in the world on him now,” says one of the deputies.

Only minutes later, he died.

“Naw, he ain’t fucking breathing,” a deputy said as they realized they just killed this man.

At the end of the video, police appeared to be happy with the fact that Sherman was dead.

“Yeah, I’m ready to do that (unintelligible) thing again,” a deputy said with a grin.

“Dude, I’m fucking fired,” the other deputy responded, apparently not happy with the death of this man.

According to his father, Chase “was a very strong kid, but laying down in the seat belt … come on. With three guys on you? Come on. And to keep pushing the taser in you? Come on.”

According to an attorney for the family, police deployed their tasers into Sherman at least 15 times.

“For four minutes and 10 seconds after he said ‘I quit,’ they still tased him and kept him on the ground,” Chris Stewart, a lawyer for the Sherman family said. “That’s torture, and they killed him.”

While it wasn’t seen on the body cam footage, the family also explained how the officers high-fived each other after the removed Sherman’s body from the scene.

Stewart tells the Times that none of the deputies involved have been suspended and they are all still working.

While our calls to the Coweta County Sheriff’s Department were not immediately returned, the Times reports that the District Attorney told them that the deputies are currently under investigation by their office.

According to Amnesty International, between 2001 and 2008, 351 people in the United States died from being shocked by police tasers. Electronic Villiage has documented another 283 taser-related deaths in the United States from 2009- October 2014. That means there have been at least 634 documented taser-related deaths in America since 2001, and there have definitely been more since the list was curated.