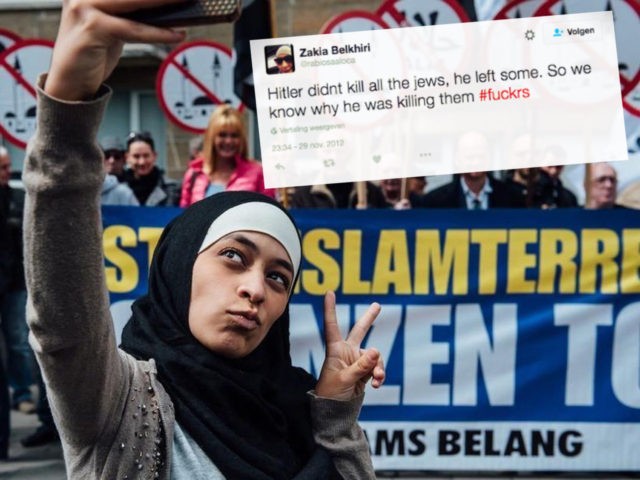 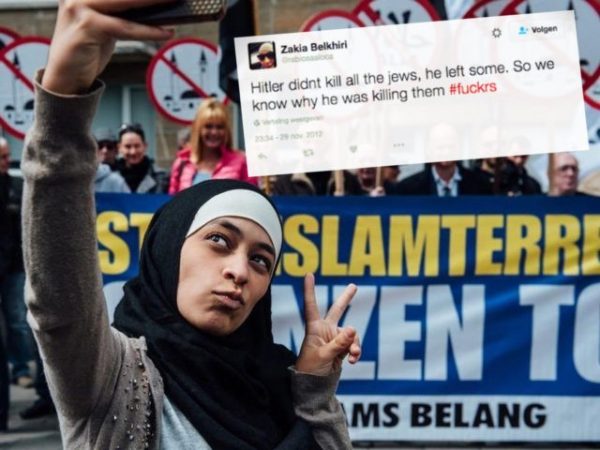 The media picked up the photo and ran the story and ran with it. Their takeaway from the photo is merely a projection of their narrative. What this photo says to me is these vile Jew-haters fear nothing. They smirk because they mean to rule.

Media-Darling Muslim Selfie Girl: ‘Hitler Left Some Jews So We’d Know Why He Killed Them’ By Raheem Kassam, Breitbart, May 20, 2016:

A Muslim girl who took a “defiant” selfie at an anti-Islam protest in Belgium allegedly posted anti-Semitic comments on her Twitter, Facebook, and Ask.fm accounts, according to a Belgian former soldier and a leading Dutch website.

Zakia Belkhiri, 22, was lauded as an “inspiration”  by the media as her picture next to Vlaams Belang (Flemish Interest) protesters went viral.

But web sleuths have now claimed that Ms. Belkhiri’s “peace sign” in the picture is perhaps out of character for her. They claim she tweeted in 2012: “Hitler didnt kill all the jews, he left some. So we [would] know why he was killing them”.

Her Ask.fm account allegedly read: “f*ck that Jewish language” when she was asked if she wanted to learn Hebrew while critics claim her Facebook account expressed her hatred for Jews. Immediately after the incident, Ms. Belkhiri deleted her Twitter account and told BBC Trending that “didn’t want to look like a girl who seeks attention”. It is unclear as to whether she told the same thing to the cameramen when she posed for pictures at the protest.

The initial story was lauded by Buzzfeed, whose writers called Ms. Belkhiri an “inspiration”, and by the BBC, the Telegraph, the Huffington Post, Vox, Mashable, Mic, and hundreds of other websites around the world.

NBC’s Jake Heller was shocked to hear of these past alleged postings by Ms. Belkhiri.

But the Dutch website Geenstijl, which delivered a Dutch referendum on the European Union earlier this year, was less shocked: “Do you remember? The Muslim girl… what a mischievous opposition, when this innocent girl clearly demonstrated of all that white fascism.

“Unfortunately, she proved no exception, she proved the rule. She is the rule. The rabidly hating Jews rule where the average Muslim is concerned… The Internet does not forget. And screenshots are eternal. Oh yeah Zakia, you want fame? Enjoy it girl. We’ll keep an eye on you.”

And while Ms. Belkhiri claims that she wanted to avoid fame, it does not explain her tweet as she was first going viral, which read: “I ain’t a diva but don’t push me game is like the sweetest joy next to getting money”.

Ms. Belkhiri’s social media accounts were first subject to mass deletions and now have been deactivated in their entirety.