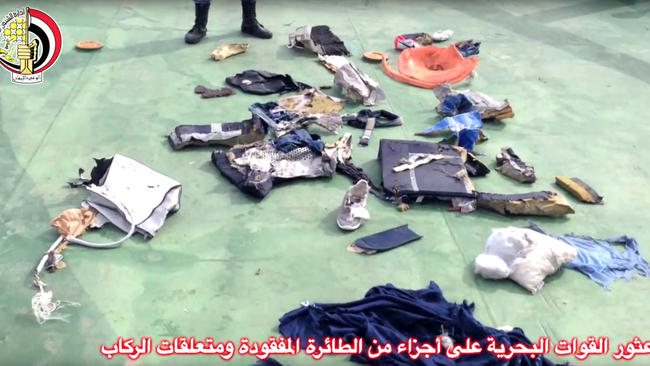 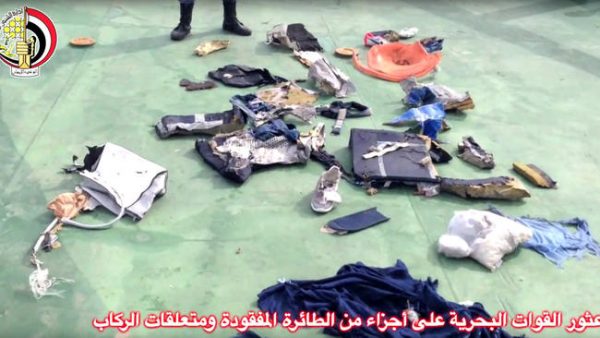 An “internal explosion” tore through the right side of the aircraft, a pilot said last night — in other words, a bomb.

Air industry news site The Aviation Herald published data from the plane’s Aircraft Communications Addressing and Reporting System (ACARS) that appears to give clues as to what happened on board the jet.

According to the data, smoke alarms in the lavatory behind the cockpit first began sounding at 00.26GMT. Less than a minute later, smoke was also detected in the avionics [electronics].

The final two alerts from the plane indicate faults with the FCU – the flight control unit used by the pilot to input instructions into the flight computer – and the SEC 3 – the computer that controls the plane’s spoilers and elevator computers.

But experts are cautious in revealing what the data shows.

‘These are not messages that enable us to interpret anything,’ said Sebastien Barthe, a spokesman for France’s Bureau of Investigations and Analysis.

Leak: Data emerged indicating the EgyptAir Flight MS804 was on fire before it plummeted into the Mediterranean. An ACARS screen grab (above) shows smoke alarms in the lavatory behind the cockpit sounded at 00.26GMT, three minutes before the plane lost contact

Other clues that might impact the investigation include this:

According to flight attendant, Fatima Ali,  the captain was a deeply devout Muslim who would pray onboard and tried to make all five daily prayers, as long as they did not get in the way of his duties.

He would use navigation equipment to figure out which direction to face Mecca.

Remember, back in 1999, the  co-pilot of Egyptair flight 990, en route to Cairo from Kennedy Airport, deliberately flew into the Atlantic off Massachusetts while ululating “allahu akbar”. All 217 people aboard died.

The EgyptAir passenger jet that plunged into the Mediterranean Sea killing all 66 people on board was once attacked by a group of political vandals who scrawled an eerily accurate threat on its underside.

Aviation workers at Cairo Airport were reportedly behind the attack on the plane, which saw the graffiti message ‘we will bring this plane down’ written on it in Arabic.

Some workers also wrote ‘traitor’ and ‘murderer’ in messages directed at Egypt’s president Abdel Fattah el-Sisi – a play on the phonetic similarity between the last two letters in the plane’s registration SU-GCC and the leader’s surname.

[…] According to unnamed officials at Cairo Airport, who revealed the details in an interview with The New York Times, the attack came as a result of unrest after former general el-Sisi ousted the elected president Mohamed Morsi in 2013. (Daily Mail)

EgyptAir crash: Flight data points to ‘internal explosion’ on plane once daubed with graffiti saying ‘We will bring this plane down’ By Raf Sanchez, In Cairo Magdy Samaan, In Cairo, 22 May 2016:

Experts say flight data ‘seems to point towards a bomb’
Body parts and suitcases from the missing flight found
EgyptAir flight MS804 disappears: everything we know

Data from the final moments before EgyptAir flight MS804 crashed into the Mediterranean suggest an “internal explosion” tore through the right side of the aircraft, a pilot said last night.

Investigators trying to determine whether the A320 was brought down by terrorism or a technical fault are poring over a series of warnings indicating smoke filled the cabin shortly before it disappeared from radar.

French authorities confirmed that smoke detectors went off aboard the flight a few minutes before it crashed but said it was not clear what caused the smoke or fire.

A commercial pilot with a major European airline told The Telegraph that other parts of the data log suggested that windows in the right side of the cockpit were blown out by an explosion inside the aircraft.

“It looks like the right front and side window were blown out, most probably from inside out,” said the pilot, who flies an A330 similar to the crashed A320 and spoke on condition of anonymity.

The data was taken from the plane’s Acars system, which sends short transmissions from the aircraft to receivers on the ground.

Until investigators find the aircraft’s black boxes, which are still missing in the Mediterannean, the Acars offers the best sens on what was happening aboard.

Three different warnings showed there were faults in the windows next to the co-pilot, suggesting they could have been blasted outwards by an onboard bomb. That does not mean the explosion came from the cockpit but indicates the right side of the plane was more badly damaged than the left.

The pilot suggested the smoke detectors may have been triggered not fire but by fog which filled the cabin as it lost air pressure in the moments after the explosion.

Meanwhile, the Egyptian military released images of shoes, handbags and other forlorn items pulled out of the sea near the crash site. Video footage showed unused life vests and torn up parts of seats scattered across the deck of an Egyptian naval ship.

French and Egyptian ships are focused on trying to recover the black boxes, which would reveal what said in the cockpit before the plane crashed.

Although no terrorist group has claimed responsibility, French detectives are examining a pool of around 85,000 people with “red badge” security clearance that gives them access to restricted areas of Charles de Gaulle airport.

The task is complicated by the fact that many work for sub-contractors and turnover is high. Screenings are often limited to checking an employee has no criminal convictions and does not appear on a terror watch list.

Last December around 70 red badges were withdrawn from staff at Charles de Gaulle who were found to have praised the attacks in Paris, prayed at mosques linked to radicalism or showing signs of growing religiosity like refusing to shake hands with women.

A French trade union also warned that short stopovers like that made by Flight 804, which was on the ground a little over an hour, gave little time for security staff to carry out thro

With no bodies to bury, Egypt continued to mourn the loss of 30 of its citizens but was unable to carry out formal funerals.

Among the dead was a husband and wife who sold everything to pay for lifesaving cancer treatment and now leave behind their three young children as orphans.

Ahmed Ashery, 31, sold his family’s flat and car to raise money so his wife Reham could undergo cancer surgery in France, according the Egyptian newspaper Masrawy.

The couple left their young son and two daughters with his mother and spent a month in Paris, where Mrs Ashery had surgery and seemed on the path to a full recovery. They boarded Flight 804 on Wednesday night excited to be reunited with their small children but the plane never made it back to Cairo.

“Ahmed sold everything to save his wife and ease her grief,” said Mohamed al-Shenawi, a family friend.

“I advised him to accept the command of God and look for treatment in Egypt but he insisted on travelling. They spent a month and then they returned onboard the plane which didn’t arrive and now will never arrive.”

Family and friends of flight attendant Yara Hany Farag gathered at a Coptic church in Cairo to grieve around a large cross of white flowers with a picture of the young woman. Her grandmother stood in front of the picture crying: “Yara answer me, I want hold you.”

Her mother described her unmarried daughter as “a bride for heaven”.

Earlier in the day the family were asked by EgyptAir to provide DNA samples to help with eventual identification of bodies. So far a few human parts but no full bodies have been recovered.