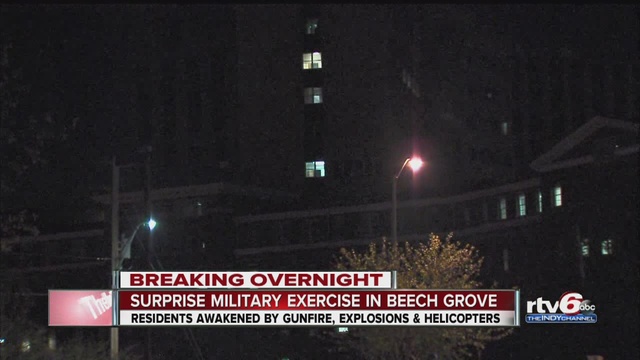 “We thought the world was ending” 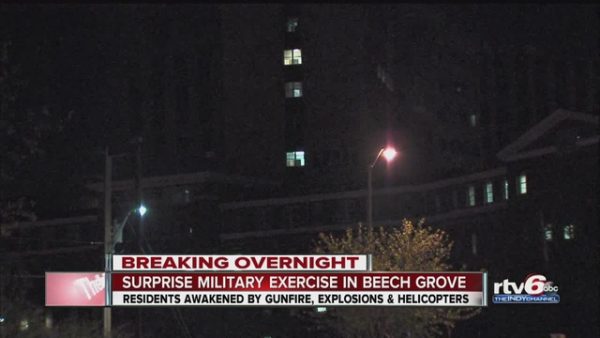 Residents of Beech Grove, Indiana, thought that war had broken out last night after the Marion County police dispatch was flooded with 911 calls from panicked residents confused about a military drill.

Callers reported explosions, gunshots and the sound of low-flying helicopters as a simulated raid on the old St. Francis hospital got underway.

Residents were “upset about the drills,” according to Fox 59, many of whom say they didn’t receive a knock on the door warning them about the exercises.

Startled locals took to Twitter to express their shock.

“Did we go to war and no one mention it?” asked Mary Graham.

Anyone know what's going on in the sky above Beech Grove right now? Did we go to war and no one mention it?

“We’re about a block away on 14th & no one told our street. Whole neighborhood was out bc we thought the world was ending,” she added.

We're about a block away on 14th & no one told our street. Whole neighborhood was out bc we thought the world was ending. 😁😳😂

Another resident claimed his sister, “saw a helicopter shoot down another helicopter”.

“We’re sorry people were startled,” Beech Grove Police Capt. Robert Mercuri told the Indianapolis Star. “We hope they understand that the city of Beech Grove was trying to help the people who protect us everyday.”

Controversy over military drills taking place near populated areas has been raging for years, with many concerned about a blurring of the lines between the military and domestic law enforcement.

During a 2012 U.S. Army exercise, St Louis City residents were told not be alarmed at the sight of U.S. Army tanks rolling down residential neighborhoods after sightings of the vehicles provoked fears of martial law. Local news media channels featured interviews with residents who praised the sight of troops on the streets as a valuable crime-fighting tool similar to that used in foreign countries.

In March 2014, the Department of Defense conducted military training in Broward County, with exercises involving low flying helicopters designed to ‘scare the crap out of people’, according to one local reporter. Residents were shocked to see Navy SEALS practicing storming a university building from a Black Hawk chopper.

Alarmed residents who reported low-flying black helicopters with their lights turned off buzzing downtown Dallas in December 2014 were witnessing U.S. Special Forces drills intended to allow troops to get a feel for “realistic urban sites”. The maneuvers were part of preparedness training for U.S. Special Operations Forces.

Blacked out helicopters also buzzed Kentucky and Cincinnati residents in May 2014 as part of an unannounced military drill, with one eyewitness telling Infowars the maneuvers resembled something out of a “war zone”.

During a March 2015 drill in Fort Lauderdale, Florida, military and law enforcement practiced the internment of citizens.