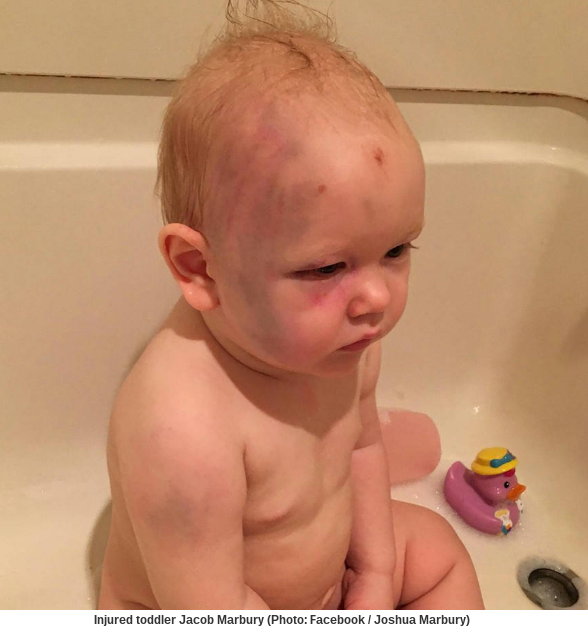 We live in a country where, as a parent, you could get your children taken away from you if you let them play outside without direct supervision.

However, if your babysitter smacks your toddler across the face so hard the entire right side of the baby’s face is left black and blue and swollen, giving him a black eye, and you take your baby to the hospital and the doctor then shows you the handprints, which there are copious pictures of, and even a detective who investigates the evidence says the impact of the smack could’ve killed the baby, not to mention the guy who beat the baby in the first place even admits he did it…

The case gets dropped for “lack of evidence”.

Look at what happened to baby Jacob while he was being babysat:

Alicia Quinney and Joshua Marbury posted a picture of their badly bruised son Jacob, taken the day after they found him alone on the floor in his room crying, and the man they trusted to watch their children asleep on the couch.

“The first think I saw was Jacob’s black eye,” said Quinney. “And I was like, oh my gosh, what happened? And he turned over and the whole side of his face was black and blue.”

Quinney and Marbury said they took their son to the hospital, where doctors and social workers took pictures, documenting the injuries. They also filed a police report.

A spokesman with the Sherwood Police Department said the case is under investigation, and in the hands of the Washington County District Attorney.

More than two months after the incident, there has not been an arrest, which frustrates Jacob’s parents.

Another Oregon prosecutor, speaking on the condition of anonymity, said child abuse cases are often very difficult to prosecute, because of the way Oregon law is written. State statute requires a prosecutor to prove beyond a reasonable doubt there substantial pain and serious physical injury to the child, and when there is no witness to the act and the child is too young to say he or she was in pain, the burden of proof is high.

To say this is outrageous or a miscarriage of justice or a sad joke is an understatement.

The parents have posted the pictures on social media in the hopes that something will happen with their case due to public outcry… In other words, the legal system has failed so pathetically that out of desperation the parents have turned to Facebook for help. Talk about an Idiocracy society.

Their story has gone viral on Facebook, with over 370,000 views. People truly are outraged. If there is no justice in such an obvious open and shut case as this, if we cannot defend society’s most innocent after having suffered such obvious abuse, then there truly is no justice and no defense left for anyone.