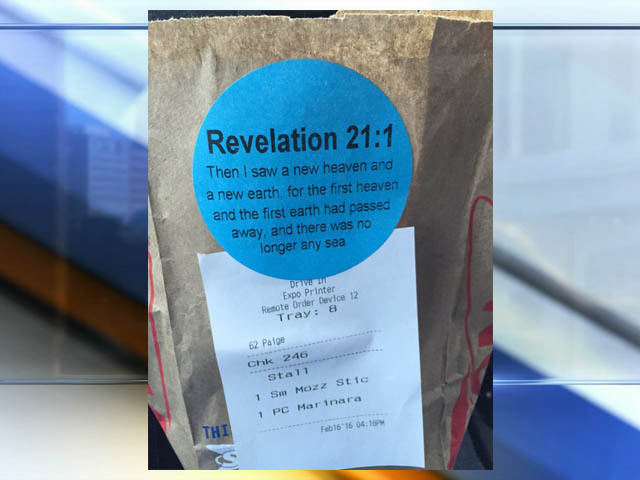 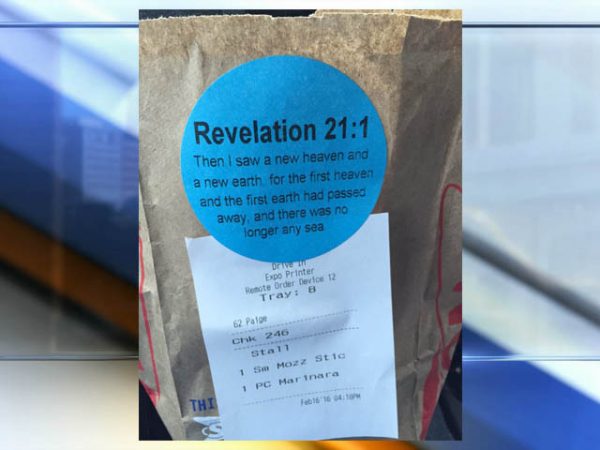 on their food packaging.

Now the restaurant has stopped putting the stickers on the packaging… but not for the reason you might think. They didn’t stop because of pressure from their customers, no, they stopped because demand was too high! In fact, the store didn’t choose to stop using the stickers — they were forced to do so when they ran out of them!

This past Thursday the store’s Facebook page posted a message saying they were currently out of the beloved stickers, but that they’d soon be giving them away again.

“We are still putting the bible verse stickers on our bags. However [due] to the number of people asking for them, after the news story, we are currently out,” the local Sonic posted on their Facebook page. “Our next shipment of them should arrive in the next couple days. Thanks for your support.”

By the way, their Facebook page is loaded with Christian imagery and conversation, and the store is owned and managed by Christians.

Outraged liberals have been leaving nasty little notes and sending unkind emails ever since the story broke, but the local restaurant has received a lot of support too. For their part, the corporate office has disavowed any connection to the ongoing activities at their Raymore, Missouri location.

Local media outlet KSHB reported that supporters and critics have taken to Facebook to debate the stickers, with Sonic corporate staying neutral.

“Sonic is a public company, which means they aren’t Christian-based such as Hobby Lobby

. However, many Sonic Drive-Ins are franchise owned, therefore owners can make their own unique decisions,” noted KSHB.

“Although the Bible verse stickers don’t come with every order, the Raymore Sonic doesn’t plan on removing them from their business any time soon. Also, employees do have the option to use alternative stickers that are not Bible related.”