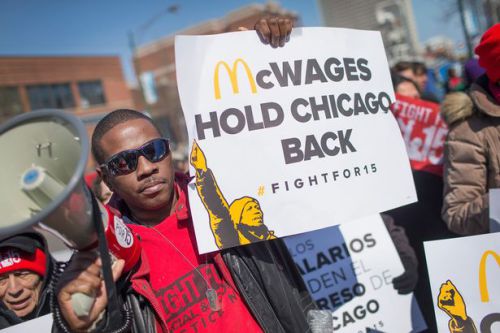 Robotics is developing in such leaps and bounds that the replacement of low-skilled human workers by robots is inevitable. But the political , i.e., non-market forces, push for and resultant increases in the minimum wage are hastening that replacement — and it’s already happening.

[T]he fast food industry is going to end the hiring of humans. In California there is a McDonalds that is using a robot to make up to 360 burgers and hour—and kiosks to take orders and payment. Jobs for teens are in danger. Now Wendy’s, in 6,000 stores will fire cashiers and “hire” kiosks to do the job of taking orders and payment. This starts before the end of THIS year—the next step are the robots making the food.

You see, an increase in minimum wage to $15/hour is actually more than that to the employer, when one adds health care coverage, Social Security unemployment insurance, and other costs. That means, according to one calculation I’ve seen, a $15/hour low-skilled (and too often surly) worker like in the fast-food industry actually costs the employer $40,000 a year.

Jessica Haworth reports for the UK Mirror, May 25, 2016, that former McDonald’s CEO Ed Rensi warned that huge job losses are imminent because robots will take over staff jobs at the fast food empire. He said the reason is “common sense” — buying highly skilled robots, while expensive in the short term, is a cheaper alternative than employing people on minimum wage to work in the company’s worldwide restaurants. Rensi explains:

“I was at the National Restaurant Show yesterday and if you look at the robotic devices that are coming into the restaurant industry. It’s cheaper to buy a $35,000…robotic arm than it is to hire an employee who’s inefficient making $15…an hour bagging French fries. It’s nonsense and it’s very destructive and it’s inflationary and it’s going to cause a job loss across this country like you’re not going to believe. It’s not just going to be in the fast food business. Franchising is the best business model in the United States. It’s dependent on people that have low job skills that have to grow. Well if you can’t get people a reasonable wage, you’re going to get machines to do the work. It’s just common sense. It’s going to happen whether you like it or not. And the more you push this it’s going to happen faster.“

Predictably, a McDonald’s UK spokesperson denies it: “The suggestion that McDonald’s is planning to replace employees with robots is completely untrue. Our staff are vital to our business and in the UK alone we employ over 110,000 people who serve 3.7m customers every day.”

McDonald’s denial notwithstanding, the fact is that Pizza Hut has already recruited a fleet of walking, talking humanoid robots to take orders and process payments. One of them is Pepper, the humanoid robot made by Japanese technology firm SoftBank, which has already been used by Nestlé to sell coffee machines. Pepper can read and respond to human gestures, expressions and tone of voice, allowing customers to communicate with the robot “just like they would with friends and family”.

Pizza Hut said that it plans to have Pepper robots working as waiters in its restaurants in Asia by the end of 2016, to take orders and engage with customers. Vipul Chawla, managing director of Pizza Hut Restaurants Asia, said, “We are excited to welcome Pepper to the Pizza Hut family. With an order-and-payment-enabled Pepper, customers can now come to expect personalised ordering at our stores, reduce wait time for takeaways, and have a fun, frictionless user experience.

Note: After a very unpleasant experience with the local branch manager at my husband’s Citibank, with which he has done business for decades, I discovered that I was able to do everything online any way. I will never set foot in that bank again and will begin the process of taking all our money from Citibank and move it elsewhere.

While the low-skill fast-food industry is leading the way of robots replacing humans, this is just the beginning.

A new study, by London Business School professor of management practice Lynda Gratton and futurologist David A. Smith, into the future of human employment is predicting a surge in machine-led work into higher-skilled occupations such as robotic counsellors, body part makers and virtual lawyers. Even lawyers, doctors and accountants may be redundant in 20 years after their jobs are taken over by robots. Gratton and Smith also analyzed work that will be critical for the future — in communications, robotics, space, environment and medicine — and concluded that they will be more efficient and successful if undertaken by machine.

The reason in the case of middle- and high-skilled work is not labor cost, but efficiency: robots are able to produce better results. As futurologist Smith explains: “In fields such as law, accountancy and medicine, machines are likely to produce generally better answers than humans.”

“Studies have suggested that a third of jobs in Europe will be replaced by technology over the next two decades. As middle-skilled roles disappear, workers may find that the ‘rung’ above them no longer exists, and that the career ladder may begin to look more like a career web. The ultimate implication is that workers cannot now expect to gain seniority by moving ‘up’, but rather moving sideways by gaining additional complex skills.“

What America and other countries will do with the MILLIONS of low-skilled people displaced by robots is anyone’s guess.