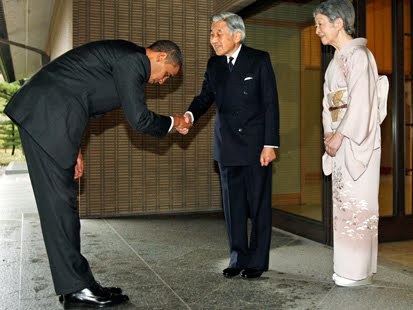 Obama’s entire presidency has been one unending apology-and-diss-America tour around the world. As his days in the White House dwindle to nothing, expect that to accelerate.

The POS took his latest apology-and-diss-America act to Japan, where he managed to outdo even his past acts by condemning the 1,076,245 Americans who gave their lives or were wounded in the Second World War.

Friday, May 27, 2016, on the eve of Memorial Day, as the President of the United States of America, Obama told the world that the Truman Administration’s decision to drop a nuclear bomb on Hiroshima, Japan on August 6, 1945, arose from America’s blood-thirsty hypocrisy (“justify violence in the name of some higher cause”), religious zeal (“believers who have claimed their faith as a license to kill”), jingoistic nationalism that was “used to oppress and dehumanize those who are different,” and moral degeneracy (“technological progress” without a “moral revolution”).

How easily we learn to justify violence in the name of some higher cause.

Every great religion promises a pathway to love and peace and righteousness, and yet no religion has been spared from believers who have claimed their faith as a license to kill.

Nations arise telling a story that binds people together in sacrifice and cooperation, allowing for remarkable feats. But those same stories have so often been used to oppress and dehumanize those who are different.

Science allows us to communicate across the seas and fly above the clouds, to cure disease and understand the cosmos, but those same discoveries can be turned into ever more efficient killing machines.

The wars of the modern age teach us this truth. Hiroshima teaches this truth. Technological progress without an equivalent progress in human institutions can doom us. The scientific revolution that led to the splitting of an atom requires a moral revolution as well.

Then Obama commiserated with the Japanese victims:

Why do we come to this place, to Hiroshima? We come to ponder a terrible force unleashed in a not-so-distant past. We come to mourn the dead, including over 100,000 Japanese men, women and children, thousands of Koreans, a dozen Americans held prisoner.

Their souls speak to us. […] We stand here in the middle of this city and force ourselves to imagine the moment the bomb fell. We force ourselves to feel the dread of children confused by what they see. We listen to a silent cry.

But Obama, the bleeding heart, made no mention of the American lives and property destroyed by Japan’s bombing of Pearl Harbor on December 7, 1941. Nor did he mention the Imperial Japanese Army’s wanton slaughter of (Rape of Nanking), and grotesque medical experiments on Chinese civilians, forcing Korean women into sexual slavery (“comfort women“), and unspeakable cruelty toward Allied POWs (Bataan Death March).

Rape of Nanking: Body of Chinese woman killed by being raped with a Japanese bayonet

Nor did Obama mention that President Harry Truman’s decision to use the atomic bomb took place only AFTER the U.S. fire-bombing of Japanese cities, and was intended as a means to avoid a full-scale Allied invasion of Japan, which would exact an incalculable loss in human lives — American and Japanese.

Nor did Obama mention that the bomb dropped on Hiroshima was only the first of TWO nuclear bombs. That Japan refused to surrender after Hiroshima, and so three days later, on August 9, 1945, the U.S. dropped a second atomic bomb on the city of Nagasaki. Only then did Emperor Hirohito order the military government to accept the terms the Allies had set down in the Potsdam Declaration for ending the war. After several more days of behind-the-scenes negotiations, in a recorded radio address to his people on August 15, Hirohito finally surrendered.

In the words of Joel B. Pollak for Breitbart:

He left out the moral case for ending the war, and the hundreds of thousands of deaths avoided because of Hiroshima.

The contrast to President Harry S. Truman could not have been clearer.

Reflecting on the decision to bomb Japan years later, Truman declared: “That bomb caused the Japanese to surrender, and it stopped the war. I don’t care what the crybabies say now, because they didn’t have to make the decision.”

As he has done before, Obama cast a moral equivalence between different civilizations, implying that Americans were just as bad as the Imperial Japanese, or anyone else.

But he went further, casting doubt on the American effort in World War II itself [….]

There is really only one response to Obama’s gesture, and it goes beyond media disputation and moral condemnation.

It must be made clear that at Hiroshima, Obama represented no one but himself — not the Greatest Generation who fought the war, and not the generations of Americans who have grown up enjoying the freedom that victory over Japan secured.

The U.S. Congress declared war on Japan the day after Pearl Harbor. Millions of Americans fought to save the country, and civilization. Hundreds of thousands died, often in brutal hand-to-hand combat against a fanatically determined Japanese enemy.

It is the inescapable duty of the Congress of the United States today to censure President Barack Obama for casting doubt on the sacrifices and motivations of the Americans who fought the Second World War — on the eve of Memorial Day, no less.