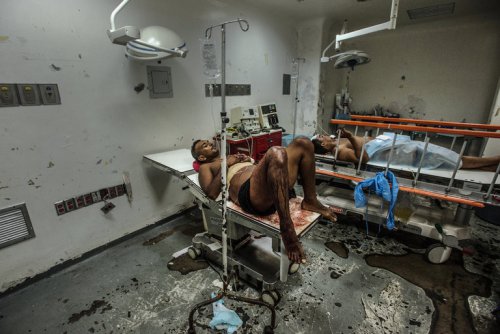 We are witnessing something unprecedented in our life time: An entire country, Venezuela, is shutting down before our eyes.

Here’s the latest on the increasing desperate situation in Venezuela, from The New York Times, May 28, 2016:

(1) Electric blackouts: Electricity is being rationed. To save electricity:

(2) Water shortage: Water is also being rationed. As an example, water arrives just once a week, on Thursdays, to the neighborhood of San Antonio de los Altos. But the water is a brownish color and is making people sick. Many Venezuelans say they have gotten skin irritations from showering or from the inability to bathe and wash their sheets and towels.

(4) Many people cannot make international calls from their phones because of a dispute between the government and phone companies over currency regulations and rates.

(5) There is little traffic in the capital, Caracas, because so few people, either for lack of money or work, are going out. Buildings downtown, including government buildings, are empty.

Scene in a Venezuelan hospital

(6) Public health crisis: People are dying in hospitals, from electric blackouts, broken medical machines (X-ray, dialysis, scanning, incubators), and chronic shortages of medicine (antibiotics, intravenous solutions), bandages, soap, gloves, beds, water (doctors preparing for surgery at the University of the Andes Hospital in Mérida clean their hands with bottles of seltzer water), and even food. Whatever supplies there are are stolen by hospital staff to sell on the black market. The government can no longer afford to buy imported medicine. Patients are asked to bring their own blankets, sheets, pillows and toilet paper. The result: the rate of death among babies under a month old increased more than a hundredfold in public hospitals run by the Health Ministry, from 0.02% in 2012 to to over 2% in 2015; the rate of death among new mothers in those hospitals increased by almost five times in the same period.(Source)

Venezuela’s socialist government blames the problems on an “economic war” being waged by elites who are hoarding supplies, as well as the U.S. government’s efforts to destabilize the country.

President Nicolás Maduro, who succeeded Hugo Chávez, rejected the political opposition’s call for accepting international aid and described the move as a bid to undermine him and privatize the hospital system. Instead, Maduro insisted that “I doubt that anywhere in the world, except in Cuba, there exists a better health system than this one.”

But most economists agree that Venezuela is suffering from years of economic mismanagement, including over-dependence on oil and price controls that led many businesses to stop making products. Venezuela has the largest oil reserves in the world, yet when oil prices were high, the government saved little money for hard times. Now, oil prices have collapsed — they are around a third what they were in 2014.

Meanwhile, Sean Penn, buddy of the late Hugo Chavez, is still no where to be seen in Venezuela. He’s in France, screening his new movie, The Last Face, at the Cannes Film Festival. The movie, directed by Penn, has been booed by audiences and savaged by critics.