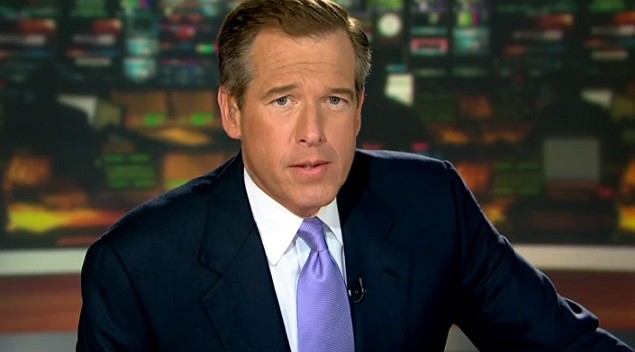 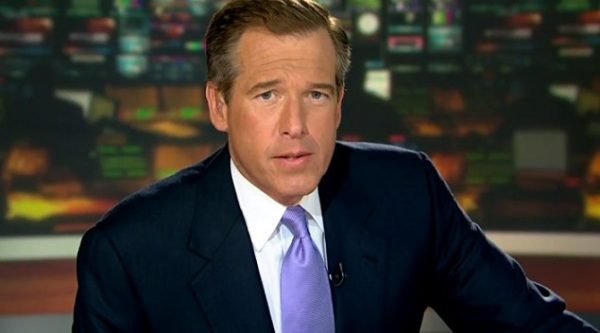 One would think after receiving quite a backlash from fabricating the story that his helicopter was “forced down by enemy fire” Brian Williams would choose his words more carefully when reporting stories on television. Unfortunately, Williams did not learn his lesson. The MSNBC breaking news host engaged in an incident of “open mouth, insert foot” when he responded to a point Andrea Mitchell made in praising former Sens. Sam Nunn and Dick Lugar for their work on non-proliferation of nuclear weapons.

The former NBC Nightly News anchor stated, “[T]hat is still the threat that people worry about that this material will fall into the wrong hands,” said Williams. “If people have found the U.S. to be preachy in the years since Hiroshima and Nagasaki about the use of nuclear weapons, it’s because we’re the only nation to have used them in anger.”

Williams added, “Sometimes, I am amazed that the world has been without these weapons all the years since, but it is a point of great pride by the people who have seen to it.”

Williams’ comment came on the heels of the guffaw “apology” by the Dictator-in-Chief on behalf of the united States for the atomic bombing of Nagasaki and Hiroshima to the people of Japan.

Both Hussein Soetoro and Williams earned the ire of many Americans this past Memorial Day because of a prepared ill thought-out speech by Soetoro and the inane comment by Williams.

Brian, Brian, Brian. Tsk Tsk Tsk. It appears that you are not one that learns from the mistakes you make. Like Hussein Soetoro, you are, in essence, declaring that the release of the atomic bombs on Hiroshima and Nagasaki were for spite, instead of ending a “war to end all wars” and ending the evil war crimes perpetrated by the Empire of Japan. Politicians and elected office holders, in the tradition of “armchair quarterbacks, down through the years have dissected then President Harry S. Truman’s decision to use atomic weapons to end World War II and save millions of lives on both sides. It is a relative easy thing to do – criticize someone’s decision on an action of that magnitude when you are not the one having to make it.

But, Mr. Williams, as history has shown us, the nation was at peace with Japan until the unprovoked attack at Pearl Harbor. And, the list of war crimes committed by the Empire of Japan were as horrid, atrocious and unconscionable as those of Nazi Germany. Moreover, the united States was in the process of negotiating a treaty with the island nation when we were attacked. Was there anger? Yes, there was; but, that was not the reason for the use of atomic weapons.

In fact, Truman explained his motive in his memoirs and in a letter penned on August 5, 1963, to a columnist who supported Truman’s decision. In the letter, posted in the article at Western Journalism, Truman wrote:

I have been rather careful not to comment on the article that have been written on the dropping of the bomb for the simple reason that the dropping of the bomb was completely and thoroughly explained in my Memoirs, and it was done to save 125,000 youngsters on the American side and 125,000 on the Japanese side from getting killed and that is what it did. It probably also saved a half million youngsters on both sides from being maimed for life.

You must always remember that people forget, as you said in your column, that the bombing of Pearl Harbor was done while we were at peace with Japan and trying our best to negotiate a treaty with them.

All you have to do is to go out and stand on the keel of the Battleship in Pearl Harbor with the 3,000 youngsters underneath it who had no chance whatever of saving their lives. That is true of two or three other battleships that were sunk in Pearl Harbor. Altogether, there were between 3,000 and 6,000 youngsters killed at that time without any declaration of war. It was plain murder.

I knew what I was doing when I stopped the war that would have killed a half a million youngsters on both sides if those bombs had not been dropped. I have no regrets and, under the same circumstances, I would do it again — and this letter is not confidential.

Enola Gay B-29 bomber pilot, Paul Tibbets, stated in 1975 of Truman’s actions, “You’ve got to take stock and assess the situation at that time. We were at war. … You use anything at your disposal. I sleep clearly every night.”

In 2005, Tibbets stated on the 60th anniversary of the dropping of the atomic bombs, “I knew when I got the assignment it was going to be an emotional thing. We had feelings, but we had to put them in the background. We knew it was going to kill people right and left. But my one driving interest was to do the best job I could so that we could end the killing as quickly as possible.”

And, while you are sitting at that desk helping out Hussein Soetoro with propaganda, Mr. Williams, Takashi Musai, head of the Japan Congress Against A- and H-bombs, stated that Paul Tibbets, a colonel at the time, should not be forgiven for performing his duty. Musai, whose mother was a nurse and suffered lifelong effects of radiation from treating bombing victims, stated in 2007, at the passing of Tibbets, “What Mr. Tibbits [sic] did should never be forgiven. His actions led to the indiscriminate killing of so many, from the elderly to young children.”

Pretty harsh, don’t you think, coming from an individual whose nation committed an act of terrorism against the united States when it bombed Pearl Harbor? Maybe that action perpetrated by the Empire of Japan should not be forgiven? As John Glenn stated, Tibbets did not make the decision to use atomic weapons; the president at the time, Truman, did. Tibbets only carried out his assignment.

Granted, Musai expressed his condolences for Tibbets’ family afterward, but indicated the man should not be forgiven for performing his duty while the nation of Japan skirts and hides its shame in the commission of war crimes to this day.

The last surviving crew member of the Enola Gay, Navigator Theordore Van Kirk, stated in 2010 that untold numbers of veterans slotted to invade the Empire of Japan thanked him over the years for his part in saving their lives.

If you want examples of actions done in anger, Mr. Williams, please take a good long look at one Barack Hussein Obama Soetoro Soebarkah, who demonstrates his disdain and anger for America and Americans at every turn. His world “apology” tour, the closing of open air memorials during the so-called government shut-down, his “bathroom” decree, his “war on coal,” his reckless spending without Congressional approval, his support of Muslims, the decree on immigration, the overthrow of the governments of Libya and Ukraine, his using of the IRS to target political opposition, gun-running to ISIS and Mexican drug cartels, continually presenting lies to the American public, and his ceasing of tours of the White House are all actions done out of anger toward this nation and her people. The list could go on, but you get the point.

Take your “water can” and shove it, Mr. Williams. Better yet, an early retirement would be in order since this is strike two. But, first, you should issue an apology to every World War II veteran, alive and deceased, for the inane description of an action taken in war that saved countless lives. Those brave men and women, along with their families, deserve it.