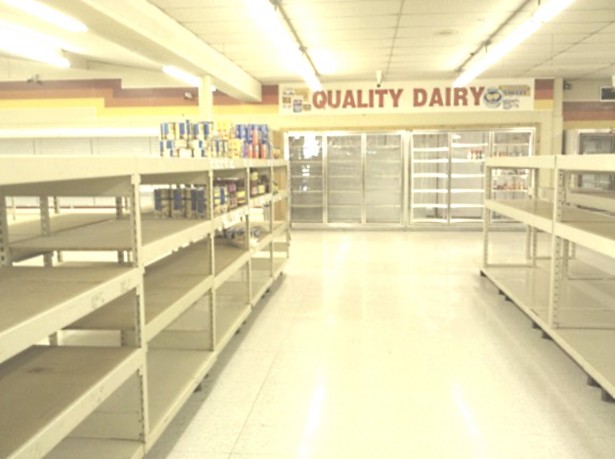 Can you imagine lining up around the block overnight just to be able to shop in a government-run, government-restricted grocery store where you have to be fingerprinted to enter and then your food is allotted to you so that you can only buy a limited amount of a certain item each month?

As the sharp drop in oil prices continues to destroy Venezuela’s economy, the IMF, who owns large portions of the developing world, is now predicting inflation will skyrocket to 720% in Venezuela this year.

Food prices are hitting astronomical rates. Pretty soon, it’s looking like hardly anyone will be able to afford to eat.

The L.A. Times recently interviewed a 42-year-old single mother who works as an accounting assistant for the government ministry and lives in Caracas. She makes 27,000 bolivars, including a food allowance, each month. That would equal $2,700 a month normally, but check out how much money she has to spend these days on food and what she has to go through just to feed her children.

In December, she was spending about half her salary on groceries. It now takes almost everything she earns to feed her two children, who subsist on manioc (also known as cassava or yuca), eggs and  cornmeal patties called arepas, served with butter and plantains.

“The last time we had chicken was in December,” she said.

The best deals are generally at government-run stores, such as Mercal and Bicentenario, where the prices are regulated.

To shop there, however, Linares said, she has to line up overnight. Even then, she might come home empty-handed if everything sells out before she gets to the front of the line — or if she is robbed leaving the store.

“The last time I bought food in a Mercal was three months ago,” she said. “They sold me one kilo [2.2 pounds] of rice, a kilo of pasta, a kilo of sugar and a liter of cooking oil for 1,540 bolivars. But to buy the basket of regulated products, I had to buy a watermelon for 400 bolivars. I didn’t want the watermelon and didn’t have the extra money to pay for it.”

These days, she buys most of her food from illegal street vendors known as bachaqueros.

The cost of everything has skyrocketed. Eggs are now an astonishing $150 a dozen. Powdered milk costs between 750 and 1000 bolivars now. Corn flour, which is a staple in Venezuelan diets, went from 9.5 bolivars a pound up to 95 a pound. And the prices for absolutely everything just keep going up.

A 23-year-old named Alejandro who works at a law firm during the day and teaches at night now makes the equivalent of $57 a month. He will sometimes decide to splurge to buy butter, even though the price is now $2, or 4% of his monthly income.

Everyone is buying from the black market because shopping at the government-regulated grocery stores have become such a time-consuming and restrictive process to deal with. They force people to buy sets of items or extra items they can’t afford just to be able to buy the ones they can. Many black market vendors will wait alongside everyone else in the hours-long lines, buy up as many products as they can and turn around and sell them on the black market for insane prices, leaving the people who actually went to the stores to buy food for their families in an even worse situation.

Shortages on everything continue. Every basic toiletry, from shampoo to toothpaste to toilet paper, is scarce if not impossible to find. Rolling blackouts rock the nation, and some 85% of companies have cut back or stopped production entirely. Foreign companies like Coca-Cola have shut down their plants there and pulled out. Government employees are on a strict government-ordered holiday, meaning they are down to working only two days a week, which at least gives them enough time to spend hours and hours in lines trying to buy food and basic necessities to continue to survive.

The question isn’t even how much longer is this going to last… the question is whether or not people elsewhere are taking this situation seriously and heeding the warnings of a society drowning in total economic chaos. Venezuela is such an oil rich country. By all accounts, this shouldn’t be happening.

Surely those people never thought something like this could happen to them, just like if you asked your neighbor right now if he or she thinks this could ever happen here… your neighbor would probably laugh at you.

And yet, Venezuelans are living in a daily nightmare. The rest of the world standing idly by should heed this warning accordingly.