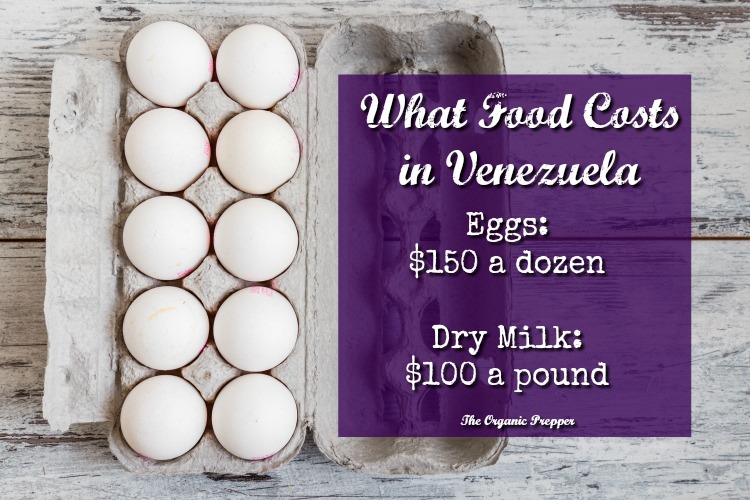 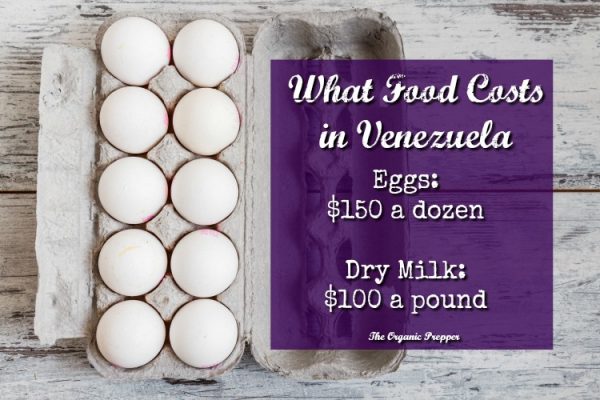 Now, those who are having difficulty finding food in Venezuela have another problem: being able to afford it.  Food costs in Venezuela have soared so high, they’re practically extraterrestrial. Those who didn’t stock up on emergency food  back before the government there made it illegal are now probably fervently wishing they had.

Here’s a crash course on hyperinflation.

Hyperinflation is when prices increase to ridiculous amounts very quickly, and it usually happens when a country’s currency becomes worthless due to economic collapse or deficit spending, after the government prints more money that is backed by nothing. Hyperinflation nearly ruined Zimbabwe after the government unrestrainedly printed money to fight a war .  It reached a staggering 2.2 million percent increase.  The most famous case of hyperinflation occurred in the Weimar Republic of Germany in 1922-1923. In these cases, hyperinflation reached  1,000,000,000,000 to 1.  (source)

Let me repeat one key point: Hyperinflation occurs due to economic collapse and when the government prints too much worthless money.  Sound familiar? *cough*quantitative easing*cough*

The food costs in Venezuela have reached hyperinflation levels.

The IMF has predicted that inflation in Venezuela will reach 720% this year, while other experts set that number at 1200%.  The drop in oil prices is partly to blame, as is the irresponsible spending of a socialist government.

An article in the LA Times sheds some very personal light on the situation there. A reporter interviewed a woman named Maria, a single mother who works as an accounting assistant for the government.

“Her monthly pay, including a food allowance, is 27,000 bolivars.

That’s $2,700 a month at the official exchange rate of 10 bolivars to the dollar. But Venezuelans have so little faith in their currency — or the government’s ability to fix the country’s deepening economic crisis — that a dollar can fetch upward of 1,000 bolivars on the black market.  At that rate, Linares earns just $27 a month.”

Maria told the reporter that her family subsists on eggs, cassava, cornmeal, and powdered milk.  She said they hadn’t eaten chicken since December.

She lines up overnight to get to shop in the government regulated grocery store, but often, by the time she gets in, they are sold out. Then she has to buy her food on the black market.  The last time she managed to purchase food at one government store was 3 months ago.

The price of eggs at the store is the equivalent of $45 USD. The price that Maria has to pay to the illegal street vendors is…are you sitting down? $150 per dozen. One hundred fifty dollars. For twelve eggs.

One source disagrees vehemently with the contents of the LA Times article.

Telesur disputes the claim that eggs cost $150, stating, “International media outlets are continuing to misreport the economic crisis in Venezuela and the effect of high inflation on the cost of living.”

But, as always, you have to consider the source. Telesur is an English-speaking news source, created to offer a “Latin-American perspective” on world events. But according to the International Business Times, the “news” you’re getting comes straight from the government party line.

Again…sound familiar?  And I’m not just talking about that scene in The Interview when the dorky news guy discovers that even though it appears that there is food in the grocery stores, it’s all fake food made of plaster.

Oh…they’re also out of beer.

If running out of food and toilet paper wasn’t bad enough, the country is also just about out of beer. According to CEO Lorenzo Mendoza, the country’s largest brewery and private food company, Empresas Polar, is no longer allowed to import barley to make beer due to President Maduro’s policy that closed the door on imports.

Speaking of Maduro, he seems to come up with more bizarre accusations every day about the reason the country is in so much trouble. (SPOILER: In none of his theories is the fault his own, nor does any of the blame get cast upon Socialist policies.)  Here’s the latest:

“But in a bizarre twist, President Nicolás Maduro is trying to pin the crisis on Polar. Government TV spots claim — without evidence — that the company is deliberately scaling back food production and hiding inventories to sabotage the economy.

In a February speech, Maduro called Polar’s Mendoza “a thief and a traitor,” saying, “If you can’t run your company, turn it over to the people and they will run it.””

Do you really think the US is safe from this kind of economic disaster?

There are certainly quite a few similarities between the route Venezuela took to get to this point and the road we’re on right now. It isn’t far-fetched to see how easily it could happen to us. After all, as recently as 1978, Venezuela was one of the 20 wealthiest countries on the planet.  Most likely, they didn’t see this coming either. Most likely, they felt complacent and smug in their abundance, just like we do here in America.

I can’t stress more fervently how vital it is that you store emergency food and supplies. Hopefully, the situation never reaches the depths that we’re seeing in Venezuela.  But if it did, how long would you be able to hold on before you were standing in those long lines, only to have the door slammed shut just before you got in the store because they had sold out?

For further reference, here are the supplies that they are out of in Venezuela. This can help you create your own list of necessary preps.

There’s no time to waste as our government recklessly prints money and becomes increasingly restrictive of our ability to be self-sufficient. What you see in the news from Venezuela could be happening in our streets here in America. You’ll want to be ready.