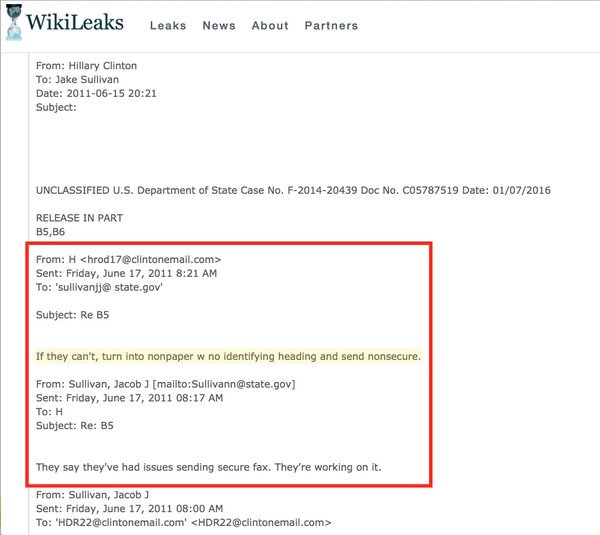 Wikileaks appears to have found the smoking-gun email proving almost inarguably Hillary Clinton broke the law — but not necessarily simply because she used the now-infamous private email server.

“Is this the email the FBI’s star exhibit against Hillary Clinton (“H”)?” Wikileaks tweeted Tuesday night.

Is this email the FBI's star exhibit against Hillary Clinton ("H")? https://t.co/MsKTZUJdHB pic.twitter.com/VkeA6X7Bkx

At issue is an email thread, beginning with a note from Clinton’s former chief of staff at the State Department, Jake sullivan, which tellingly states:

“They say they’ve had issues sending secure fax. They’re working on it.”

To which an apparently impatient Hillary replies:

“If they can’t, turn it into nonpaper w no identifying headline and send nonsecure.”

What she’s requesting from Sullivan is that he strip sensitive information of anything marking it as sensitive so it can be sent through without following security protocols. Clinton, in other words, blatantly asked Sullivan to break the law — because she apparently didn’t want to wait.

Though she’s claimed the private email server had been employed for several unbelievable reasons — from a laughable claim of naivete to the ‘everyone’s doing it claim’ that her predecessors had similar arrangements — the truth might have just become clear.

In January, rumors of this email surfaced, however, the state department had it redacted. An actual image of the email hasn’t existed until now which dispells any doubt that Clinton did, in fact, commit a crime.

In the past, Clinton has explicitly denied she ever requested sensitive information be stripped of confidential markings in order to send through the private server. Now, we’ve been shown the truth.

Besides the basic issue of sending classified or sensitive information on an unsecure server, Clinton willfully requested documents be doctored so she could intentionally have them sent to her in that unsecure manner. To be clear, this isn’t a simple case of not knowing any better — or accidentally being on the sending or receiving end of sensitive information.

Interestingly, this email also shows a level of hypocrisy seemingly only possible by Clinton. Nearly a year ago, as The Free Thought Project reported, another batch of the notorious emails showed the then-secretary of state requesting — and receiving — censorship of an unidentified video on YouTube. So potentially-classified information, to Clinton, can justifiably be sent through an unsecure server, but a video she finds unfavorable should be removed from public viewing.

Lacking favorable public opinion, Clinton continues to succeed in primaries around the country — though she seems to garner the best results in places where voting machines have proven susceptible to hackers. In fact, questionable electoral practices seem to follow Clinton wherever primaries are held.

An outside observer might wonder what Hillary Clinton wouldn’t do to win the White House — or, based on today’s Wikileaks revelation — what she would do once there.

This is the deliberate thwarting of protocol and policy in place for reasons of national security. This statement shows Hillary plotting how to receive potentially classified information without having to bother with waiting for proper channels. This is, as Wikileaks suggested, at the very least, one smoking gun.

This is also reason to question why Clinton is running for office — instead of facing charges. Though, perhaps, this email proves that will soon change.