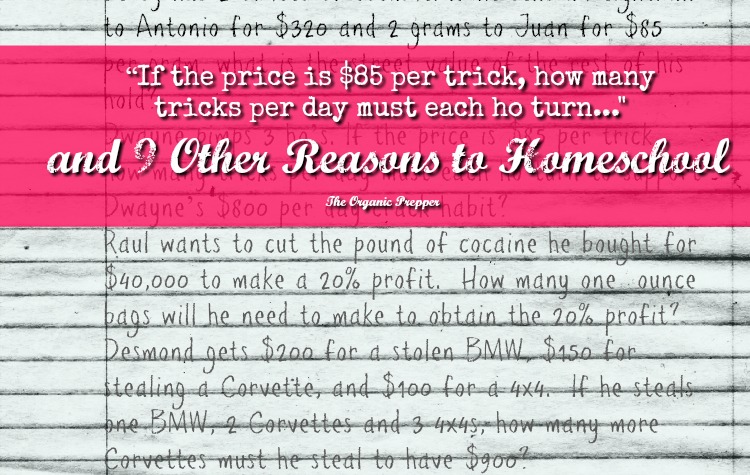 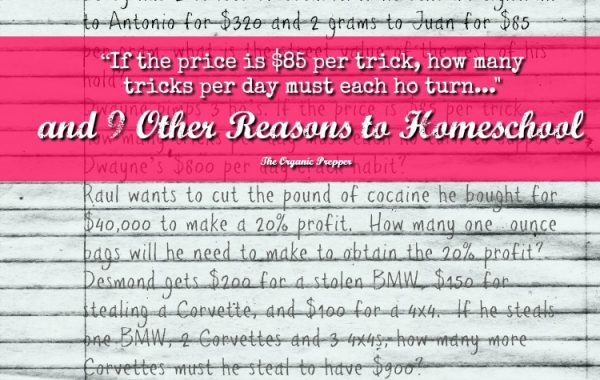 Sometimes I read stuff and think, this has to be satire. Over the past few years, I can’t believe how many articles I’ve prefaced with, “I know it seems like satire, but it’s not.”

Today is no different. If you need more reasons to homeschool your kids (and you’re not doing so already) then read on.

We all know that the education system has been on the decline for years. Folks aren’t as worried about academic achievements as they are the feelings of the children, creating a crybaby culture that gives everyone a trophy just for showing up. Schools are indoctrination centers, churning out new batches of socially correct, debt-dependent slaves who have 13 years of umm…    errr… “education” behind them.

But now, we may have just hit rock bottom.

A teacher in Alabama is on administrative leave after he or she (the identity of the teacher has not been released) decided to make a math lesson more relevant for an 8th grade class. An outraged parent “raised concerns” about the lesson that contained  the following questions, as per The Washington Post.

I don’t know about you, but I would have done a whole lot more than politely calling the school to complain.

First of all, some of those ridiculous questions don’t even have enough information to solve them. But I digress.

Not only do we need to separate school and state, we need to stop nonsense like this. We need to take charge the education our kids recieve. We need to set positive goals instead of giving them examples of how not to be, and then snickering about it.

I really don’t like being the preachy mom who seems to feel her way is the only way.  I understand that there are some very valid reasons for sending your kids to public school. Many of those reasons were mine before I got to a point at which I could work from home and educate my youngest child myself.

But now that we’ve taken the leap, it’s wonderful. It is easier than you think to get started.

But I’ve never regretted doing it for one single second. Sure, it’s a lot more hands on than shuffling her off to school. But it’s also been the most wonderful time we’ve ever spent together. We’ve learned, we’ve traveled, and we’ve truly immersed ourselves in learning, and I hope that these lessons that spark the curiosity last my daughter’s entire life. I hope that she always asks questions, searches for the answers, and lives fully, instead of sitting there getting brainwashed in a classroom setting.

And if your kids are older, don’t worry that you won’t be qualified to teach them.Older kids do very well learning on their own once they know how to actively learn instead of just sitting there in a classroom. My kiddo has learned all sorts of stuff I didn’t know.  The internet is a wonderful tool.

If you can find a way to homeschool, do it. Pull your kids out of school and teach them to be ethical, strong, critically-thinking human beings. Use the world as your classroom. You can’t expect kids getting an education like this to turn out to be the future leaders that this country needs.

Maybe the real revolution will not be what we expected at all, with civil war, protests, and violence.  Maybe it will start quietly, a society of rebels educated at kitchen tables in homes across America as more parents refuse to leave their children’s futures in the hands of a public system with an agenda.

Nothing free is ever truly without a price.

Homeschooling 101: A Guide to Getting Started

The Homeschool Highway: How to Navigate Your Way Without Getting Carsick

The Homeschool Highway 2: Further Down the Road

Home Grown: Adventures in Parenting off the Beaten Path, Unschooling, and Reconnecting with the Natural World

The Unhurried Homeschooler: A Simple, Mercifully Short Book on Homeschooling

The Teenage Liberation Handbook: How to Quit School and Get a Real Life and Education (Warning: If your teen reads this, expect them to be totally on board with Unschooling – it’s such a great book!)