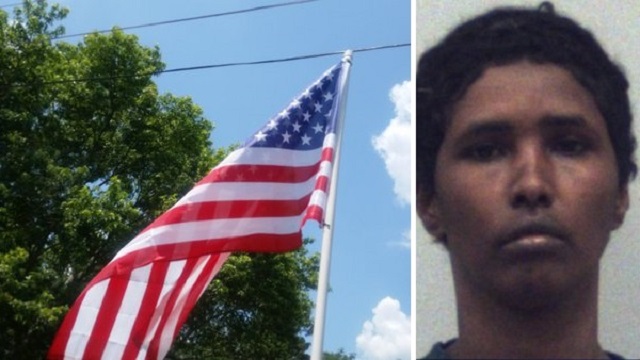 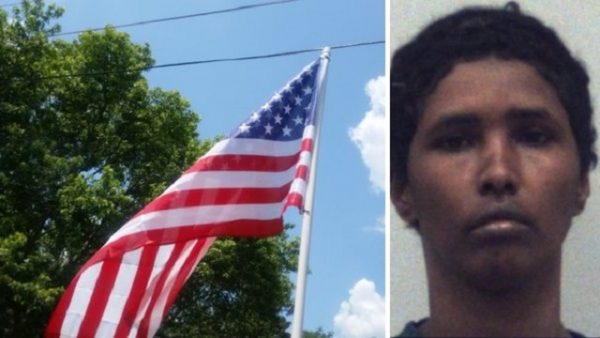 But Obama said, “Islam is peace.” Obama is bringing in hundreds of thousands of these patriots to America.

Will CAIR scream “islamophobia” if the police made her remove her black burka for her mug shot?

LAWRENCEVILLE, Ga. – A family in Lawrenceville said they were attacked by a total stranger just because they were flying an American Flag.

Amina Ahra, 30, was arrested on two counts of simple battery after being accused of attacking a mother and daughter at their home.

Dami Arno told police she was in the garage talking with her daughter when she said Ahra came out of the woods wearing a full Burka, grabbed the flag from off the mailbox and charged at them.

She said she still cannot believe it all happened on American soil.

“A lady walked out of our woods in a full Burka, full attire, stares at us for a minute, then grabs my American flag off of my mailbox and charges towards us with it, just swinging it with all her might,“ the wife and mother said.

“When she came charging , it was kinda like momma bear Instincts kicked in . She had to protect her children,” daughter Brittany Arno said.

Arno said when Ahra grabbed the flag; the two women began to fight. That is when Arno’s 17-year-old daughter jumped in and her 14-year-old son grabbed the family gun.

Neighbors also ran to help and held Ahra down until Lawrenceville Police arrived.

“I have friends who have fought and died for the red, white and blue. When she took it down, it was not disrespect, it was not a slap in the face, it was a punch to the gut,” said Arno.

Ahra remained in the Gwinnett County Adult Detention Center as of Wednesday evening.