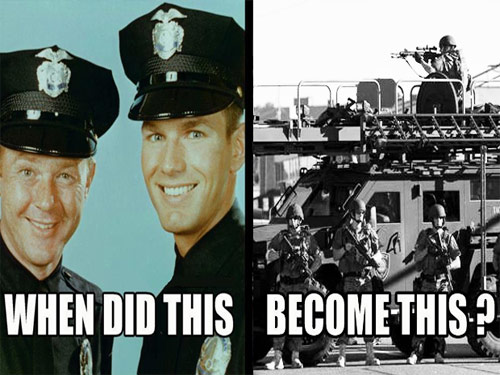 It’s a great question: when did police go from that smiling guy there who swore to serve and protect us, to the scary, sadistic, mindless, brutal abuser who might beat, cripple, shoot and possibly kill an innocent civilian (or his dog… or his cat) at any moment?

Not one but two police academies have been suspended over video showing what some are referring to as “excessive force training” — cadets being taught to elbow people in the throat and slap them across the face hard enough to knock them to the ground. Stuff like that.

The Texas Commission of Law Enforcement suspended both the Lower Rio Grande Development Council Regional Police Academy and the Hidalgo County Sheriff’s Office Training Academy while they investigate the allegations of excessive force shown in the “cadet training” video, shot at Texas State Technical College in Harlingen, below.

Check it out: this is how the cops in America are “trained” to deal with citizens:

And they call this a “peace officer” course. What a joke.

Let’s be honest. If you didn’t know this was a police cadet training video when you first watched it, the whole thing would just look like some chubby dude smacking people around and teaching them how to be playground bullies.

The Lower Rio Grande Development Council claimed the video was shot “during a defensive tactic training session,” and “for the purposes of cadet instruction and feedback,” but after evaluating this practice and as a result of this incident, this method will not be used in the future.”

No new classes will be started until the investigations are concluded. The Sheriff’s Office training academy was also suspended pending a separate investigation, but details surrounding exactly why that is have not been released to the public, meaning it’s probably even worse than the video above.