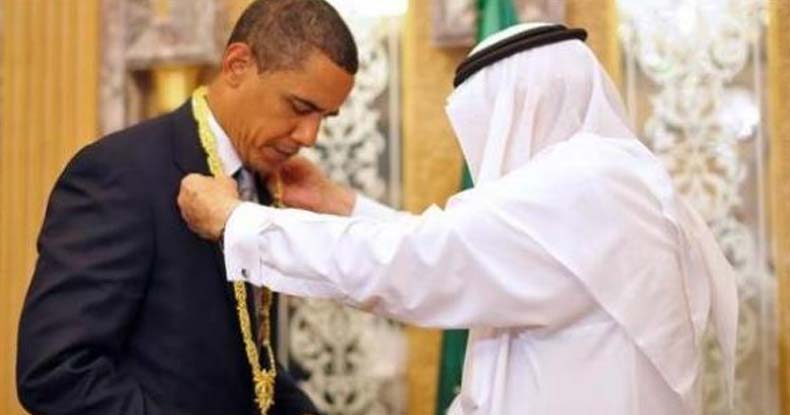 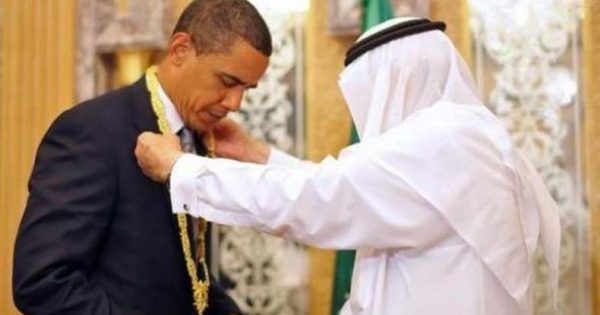 In April, we learned once again how subservient the U.S. is to the interests of Saudi Arabia when Obama poured his efforts into blocking a bill that would have allowed Saudi Arabia’s government to be held accountable for any role it played in the 9/11 attacks.

The drama centers on “the 28 pages” of a congressional investigative report into 9/11—which are still being kept from the public—that details the extent of foreign government support for Al-Qaeda. The pages could expose Saudi financial and logistical connections with the 9/11 hijackers.

The Wahhabist regime quickly responded by threatening to crash the dollar by liquidating their U.S. assets. Lawmakers quickly acquiesced with a last-minute amendment to the bill that allows for the U.S. attorney general and secretary of state to stop any pending legislation against the Saudis.

Families of 9/11 victims and all those who question the official 9/11 narrative were left stunned by this capitulation. A brutal Middle Eastern dictatorship obviously has much more influence over our government than the citizens. Saudi Arabia has great potential to hold the U.S. economy and government hostage through its purchase of Treasury holdings, but how did this special arrangement come to be?

Bloomberg has, for the first time ever, uncovered the amount of Saudi Arabia’s holdings, and the secret deal began 41 years ago to hide the kingdom’s influence over U.S. government actions.

“The basic framework was strikingly simple. The U.S. would buy oil from Saudi Arabia and provide the kingdom military aid and equipment. In return, the Saudis would plow billions of their petrodollar revenue back into Treasuries and finance America’s spending.

It took several discreet follow-up meetings to iron out all the details, [former Deputy Treasury Secretary] Parsky said. But at the end of months of negotiations, there remained one small, yet crucial, catch: King Faisal bin Abdulaziz Al Saud demanded the country’s Treasury purchases stay “strictly secret,” according to a diplomatic cable obtained by Bloomberg from the National Archives database.”

Parsky was there during the Saudi talks that took place in Jeddah, Saudi Arabia, in July 1974. He was assistant to Secretary William Simon, who was tasked by President Nixon to save America’s economy by making a deal with the kingdom and its newfound petrodollar wealth. The OPEC oil embargo, put in place in response to aiding Israel’s Yom Kippur war, was wreaking havoc on U.S. inflation and the stock market.

Simon, a former Wall St. bond trader and director of the Treasuries desk at Salomon Brothers, helped hatch a plan to finance America’s growing deficit. He “understood the appeal of U.S. government debt and how to sell the Saudis on the idea that America was the safest place to park their petrodollars.”

Saudi Arabia’s wealth was lusted after by several Western countries and Japan, but the U.S. managed to get the golden egg. However, King Faisal was worried that their money would be spent by the U.S. to further aid Israel’s military conquests, thus jeopardizing the kingdom’s rule.

U.S. officials complied by “letting the Saudis in through the back door.”

“In the first of many special arrangements, the U.S. allowed Saudi Arabia to bypass the normal competitive bidding process for buying Treasuries by creating “add-ons.” Those sales, which were excluded from the official auction totals, hid all traces of Saudi Arabia’s presence in the U.S. government debt market.”

For 41 years Saudi Arabia’s U.S. debt ownership—instead of being listed individually like other countries—was obscured by grouping under a generic heading called “oil exporters,” which included nations such as Kuwait and the United Arab Emirates.

Treasury has taken pains over the decades to protect Saudi Arabia’s confidentiality, even as scrutiny of U.S. creditors has greatly increased. The International Investment and Trade in Services Survey Act of 1976 gave the agency plenty of cover, and continued even after the Government Accountability Office found in 1979 that there was “no statistical or legal basis” for using it.

The practice of “add-ons” routinely posed risks to the Treasury system, but preserving the special Saudi relationship took precedence.

Bloomberg’s FOIA request—granted after the Treasury Dept. concluded “that it was consistent with transparency and the law to disclose the data”—found that Saudi Arabia owns $117 billion in U.S. debt, which represents 20 percent of foreign reserves.

While the kingdom is one of America’s largest foreign creditors, this number is most likely a comical understatement. One former Treasury official says the actual debt holdings are double or more. Offshore financial centers allow the kingdom to mask other Treasury purchases.

More realistic estimations of Saudi’s debt holdings are up to $750 billion, meaning that Saudi divestment is a major threat to crash the dollar and other global markets. With the oil price crash there is pressure on the kingdom to liquidate assets, making their status as creditor a political weapon.

As such, it is no surprise that Obama and Congress would protect Saudi Arabia from any possibility of being exposed as a 9/11 conspirator. The U.S. government has a 41-year history of preserving this special relationship, and is now held hostage by the consequences of the deal.

This also explains why Saudi Arabia can go on bombing hospitals and civilian populations in countries like Yemen—acting as a proxy for U.S. “anti-terror” campaigns—with no repercussions. The Wahhabist kingdom is free to carry out its war, overtly and covertly, on the Shia countries of the Middle East.