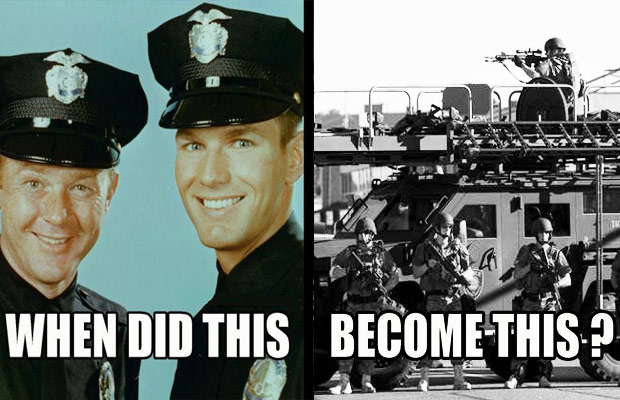 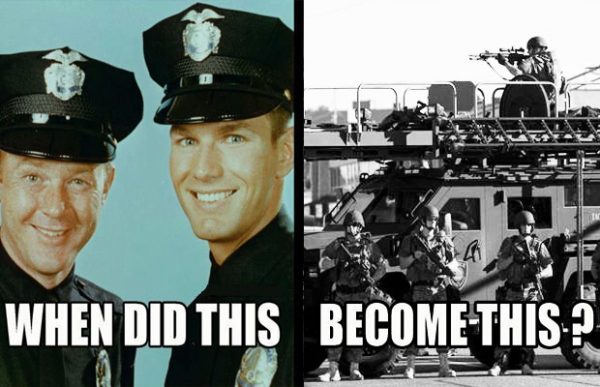 Policing in the United States metamorphosed drastically over the last few decades after the NDAA in 1990 allowed departments to obtain surplus military equipment free of charge. With the weapons and gear of war likewise came the warrior ethos. Though unprepared to handle accouterments of the battlefield, hapless American police waged war on the very communities in their charge — an epidemic level of violence by law enforcement has since erupted.

But this article isn’t a condemnation of police officers, many of whom spend their entire career without resorting to the use of excessive force. But because incidents involving excessively violent tactics resulting in serious injury and death have become so frequent people often don’t take notice, it’s necessary to point out the simplest means to end the epidemic already exists.

If we are to end or at least significantly curb the unnecessary brutality, militaristic police training must end. As intuitive as it might sound, ending the stress-based, boot camp-style instruction — currently the model for the majority of police academies — would transform American policing.

Even the Department of Justice agrees stress-based police training needs to go — in a 2013 issue of Dispatch, the newsletter for its Community Oriented Policing Services (COPS), the DoJ essentially proves the need to end militaristic training. Two models are generally employed by the nation’s police academies, the article noted, explaining:

According to a report from the DoJ’s Bureau of Justice Statistics, the majority of law enforcement training programs in the U.S. use the stress model. Considering the description of the stress model, alone, the root of violent policing becomes clear — though its proponents believe beneficial aspects outweigh potential negatives. Self-discipline, what’s known as ‘command presence,’ and higher self-confidence frequently top the list of reasons given to continue stress-based training.

But those benefits aren’t absolute and similar positives — arguably better all-around — can be achieved through the collegiate, academic model.

Assistant Sheriff Howard H. Earle conducted a comparison of the two training methods in the Los Angeles County Sheriff’s Dept. Academy from 1967 through 1971, and, granted, though the study is decades old, what he found remains relevant even today.

A panel study in 1988, commissioned by then-Governor Michael Dukakis in Massachusetts after an outbreak of kidney problems among recruits, found:

“The so-called drill instructor approach to training that includes indiscriminate verbal abuse, debasement, humiliation confrontation, harassment, hazing, shouting, and physical exercise as punishment has no place in police training” and that the model was actually counterproductive and “not conducive to training men and women in a manner that will best enable them to serve society.”

As recruits move through stages of paramilitary, stress-based training, they undergo a radical transformation both in deportment, as they take on the characteristics one would in the military, as well as psychologically. An ‘us versus them’ mentality is repeatedly hammered into the would-be cops as the separation between their former civilian selves and their future role as enforcer of laws comes to a head.

This stark separation, not as defined in the academic method of training, further emphasizes the notorious Thin Blue Line culture — recruits are told, whether verbally or through constant cues, they are special and in a different class than civilians who could never understand what their future job will entail. One study found this separation also promotes, if subtly, misogyny, racism, and a high degree of sexism as normative thought — though it does so under the guise of morality. Paramilitary training produces maladaptive coping strategies, which also separate cadets further from their civilian counterparts — even though this contradicts everything a community-based policing model putatively seeks to uphold.

Multiple studies also show the most dynamic recruits who demonstrate the skills and attitude necessary to effectively and attentively act in the communities they would police are frequently forced out of militaristic training programs. Through stigmatization as being “different” from other recruits, to castigation for as much, potentially the best future law enforcement officers often drop out or resign before the completion of training.

Understanding the overwhelming evidence points to precisely the model of police training not used by most academies brings an imperative question to mind. If law enforcement, the DoJ and multiple studies have all found non-stress-based models — non-paramilitary methods — most effective in not promoting a violent cultural mindset, why aren’t they being used?

In plain language, is the U.S. teaching its police to be violent for a reason?

It’s certainly worth considering now that an unspoken war on dissent appears to be underway in America. While the media twists resentment against violent acts by officers into a war against police, what should be asked is if that war is actually against us — against the people of this country.

Whether or not that question can be answered remains to be seen. But until verifiably better methods of training are employed — resulting in less violent police forces nationwide — it demands to be asked.

After all, experts cited by the DoJ have explained, “that the high-stress paramilitary model of training results in police practices that are contrary to democratic governance and that a structure utilizing university connections, experiential learning, and critical thinking would be significantly more effective.”

So are law enforcement agencies incompetently ignoring the solution? Or, are they ignoring it by design?