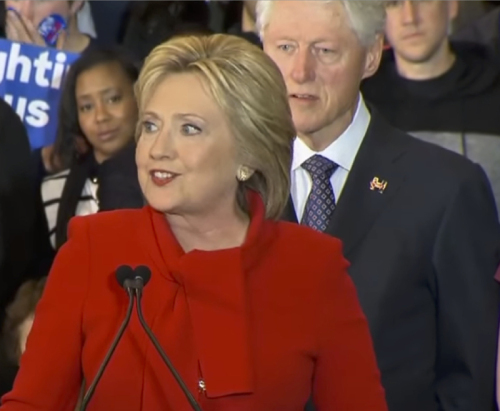 We’ve heard from Secret Service agents before — that Hillary Clinton is vicious, haughty, foul-mouthed, and contemptuous toward the Secret Service who protect her with their lives. See:

Now, there’s another tell-all that says the same things, from former Secret Service agent Gary Byrne, a 29-year veteran of the military and federal law enforcement who was posted outside the Oval Office when Bill Clinton was president, and was subpoenaed to testify before the grand jury that investigated Clinton’s affair with intern Monica Lewinsky.

A frail Bill Clinton behind a manic-looking Hillary on Iowa Caucus night, Feb. 1, 2016.

Emily Smith reports for Page Six, June 5, 2016, that in his book Crisis of Character: A White House Secret Service Officer Discloses his Firsthand Experience with Hillary, Bill, and How They Operate, which isn’t set for release until June 28, but pre-orders already have sent it to No. 1 on Amazon’s best-seller list, Byrne confirms previous accounts that:

All of which, Byrne concludes, renders Hillary too “erratic, uncontrollable and occasionally violent” to become president of the United States. He writes:

“Hillary Clinton is now poised to become the Democratic nominee for president of the United States, but she simply lacks the integrity and temperament to serve in the office. From the bottom of my soul I know this to be true. And with Hillary’s latest rise, I realize that her own leadership style — volcanic, impulsive, enabled by sycophants, and disdainful of the rules set for everyone else — hasn’t changed a bit.”

Byrne’s book threatens to derail Hillary’s campaign days before she is expected to clinch the Democratic presidential nomination.

Hillary Clinton’s campaign spokesman Nick Merrill downplayed Byrne’s book, calling it the “latest in a long line of books attempting to cash in on the election cycle with their nonsense. It should be put in the fantasy section of the book store.”

Spokeswoman Katrina Pierson for presumptive GOP presidential nominee Donald Trump said, “The issue of temperament is more a problem for Hillary Clinton. I don’t recall Mr. Trump ever screaming at the Secret Service, calling them pigs, throwing vases across the room and clawing the face of his spouse, which Hillary Clinton has been reported to do.”