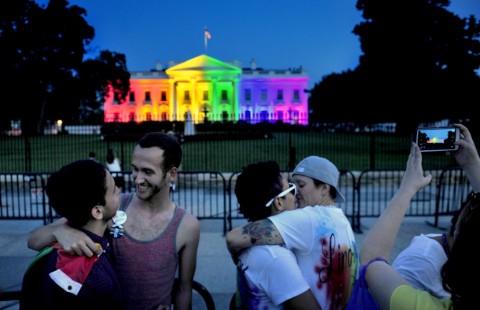 There is no way to avoid seeing things differently. We, being human and sinful, are going to have things upon which we disagree. Those who hold to the same confession of faith will find themselves at odds over an issue. But, it has gone well past this when we look at what the President has done.

As the most vocal president in American history in regard to homosexuality and transgenderism, Barack Obama issued on Tuesday his eighth annual proclamation calling upon Americans to “celebrate diversity” in observing June as “LGBT Pride Month.”

“Since our founding, America has advanced on an unending path toward becoming a more perfect Union,” he wrote in his lengthy proclamation, which praised advocates who seek to change the nation’s laws for homosexual causes.

Once again, Obama is trying to connect the fight for equal rights with the fight to normalize sodomy. It is an attempt to make the LGBT movement the same cause as that of Martin Luther King Jr. And for what purpose?

Obama wishes to make this sinful sexual practice accepted by society, even as this acceptance has led to more health issues among the same group. But Obama wants to frame this as a fight for inclusion.

“The fight for dignity and equality for lesbian, gay, bisexual, and transgender (LGBT) people is reflected in the tireless dedication of advocates and allies who strive to forge a more inclusive society,” Obama said. “They have spurred sweeping progress by changing hearts and minds and by demanding equal treatment—under our laws, from our courts, and in our politics.”

Therefore, he said, “This month, we recognize all they have done to bring us to this point, and we recommit to bending the arc of our Nation
toward justice.”

How can we speak of justice while calling for a celebration of lawbreaking (Rom. 1:24-32)? Is this not an oxymoronic approach to this issue?