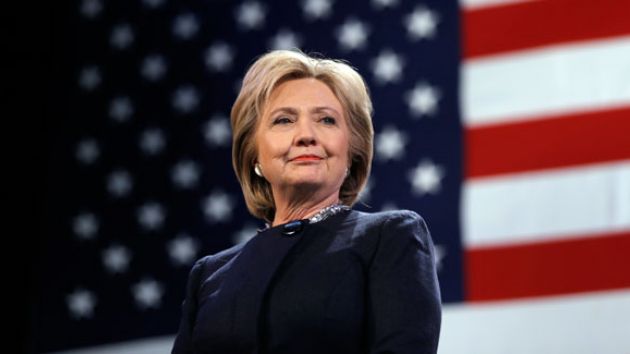 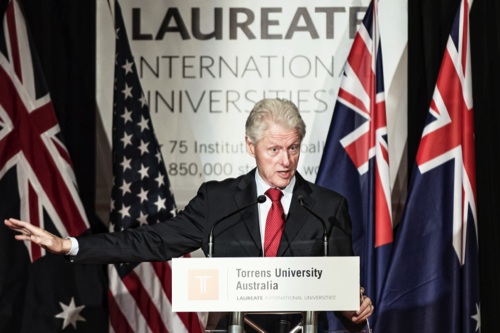 We keep hearing about Donald Trump and Trump University, but no one seems to have raised any questions about how Bill Clinton made some 16+ million dollars working with “Laureate International Universities.” Bill Clinton began his role as honorary chancellor for the Laureate system on April 24, 2010, right in the middle of his wife’s term as Secretary of State, which she held from 2010 to 2013. This brings into deep question just why did this college get huge grants AFTER Hillary Clinton was Secretary of State. Is this a scandal that no one wishes to bring forth? We will present some subjects to allow you to see if maybe you see a direct link between Secretary of State Hillary Clinton and this college due to her abuse of her position as Secretary of State.

We also have to state that one of the backers and donors is none other than the Nazi Sympathizer, George Soros. Strange how George Soros keeps popping up along with the Clinton Foundation and name. As can be seen below, the link of Clinton to this University seems to indicate that some sort of influence may have been given to direct money back to the Clinton Foundation.

“In April 2015, Bill Clinton was forced to abruptly resign from his lucrative perch as honorary chancellor of Laureate Education, a for-profit college company. The reason for Clinton’s immediate departure: Clinton Cash revealed, and Bloomberg confirmed, that Laureate funneled Bill Clinton $16.46 million over five years while Hillary Clinton’s State Dept. pumped at least $55 million to a group run by Laureate’s founder and chairman, Douglas Becker, a man with strong ties to the Clinton Global Initiative. Laureate has donated between $1 million and $5 million (donations are reported in ranges, not exact amounts) to the Clinton Foundation. Progressive billionaire George Soros is also a Laureate financial backer.

As the Washington Post reports, “Laureate has stirred controversy throughout Latin America, where it derives two-thirds of its revenue.” During Bill Clinton’s tenure as Laureate’s chancellor, the school spent over $200 million a year on aggressive telemarketing, flashy Internet banner ads, and billboards designed to lure often unprepared students from impoverished countries to enroll in its for-profit classes. The goal: get as many students, regardless of skill level, signed up and paying tuition.”

Maybe Hillary Clinton used her office and directed the grants to Laureate to help her husband make $16.46 million through her connections. This also shows strong ties to the Clinton Global Initiative.

Some papers exposed some of the dealings with Hillary Clinton and Laureate International University, but once again, it seems that no matter how much it seems to indicate that the Clinton’s used the office to gain money, it falls short for some reason or another.

“As the Washington Post reports, “Laureate has stirred controversy throughout Latin America, where it derives two-thirds of its revenue.” During Bill Clinton’s tenure as Laureate’s chancellor, the school spent over $200 million a year on aggressive telemarketing, flashy Internet banner ads, and billboards designed to lure often unprepared students from impoverished countries to enroll in its for-profit classes. The goal: get as many students, regardless of skill level, signed up and paying tuition.

“I meet people all the time who transfer here when they flunk out elsewhere,” agronomy student Arturo Bisono, 25, told the Post. “This has become the place you go when no one else will accept you.”

Others, like Rio state legislator Robson Leite who led a probe into Bill Clinton’s embattled for-profit education scheme, say the company is all about extracting cash, not educating students. “They have turned education into a commodity that focuses more on profit than knowledge,” said Leite.

Progressives have long excoriated for-profit education companies for placing profits over quality pedagogy. Still, for five years, Bill Clinton allowed his face and name to be plastered all over Laureate’s marketing materials. As Clinton Cash reported, pictures of Bill Clinton even lined the walkways at campuses like Laureate’s Bilgi University in Istanbul, Turkey. That Laureate has campuses in Turkey is odd, given that for-profit colleges are illegal there, as well as in Mexico and Chile where Laureate also operates.”

What brings the question of influence by the Secretary of State Hillary Clinton is the Bilgi University in Istanbul, Turkey, where for-profit colleges are illegal, as they are in Mexico and Chile, where “Hillary” (Laureate) colleges operate. Could the use of her office of Secretary of State have played a part in these nations allowing what would otherwise be illegal? It would seem to show that maybe Hillary made an “arrangement” with these nations to “allow” this one particular college, Laureate, to operate? That would seem to be implied because of how Hillary Clinton’s State Department began pumping millions of USAID into International Youth Foundation, which is yet another story of itself. Just think of what Donald Trump would be going through if someone affiliated with him did the same!

But there is much more about what Hillary Clinton did as Secretary of State to seemingly help the Clinton Foundation and other Clinton objectives.

Throughout ten Democratic Party debates, Establishment Media have not asked Hillary Clinton a single question about she and her husband’s for-profit education scam.”

Given what we have shown here, it is up to you to question this and ask others to bring it to the forefront for all to see. Let us show the Clintons for what they are: scam artists that take money from the very people they say they help. Your help to pass this on should be done with all haste.

Google and Apple conspire in secret pact to control the Internet