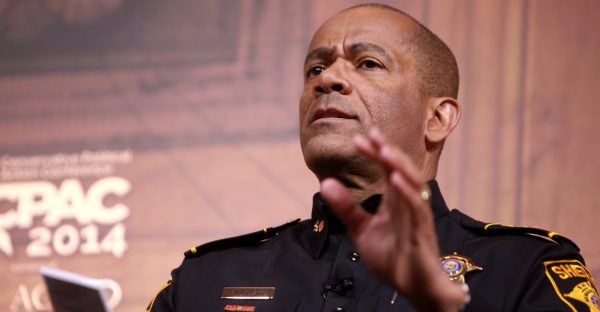 During an appearance on Hannity, Milwaukee Sheriff David Clarke accused anti-Trump rioters who violently attacked Trump supporters in San Jose last week of utilizing the same tactics that were used to silence and intimidate African-Americans in the south during the Jim Crow era.

Clarke then called for Attorney General Loretta Lynch to dispatch the FBI to “investigate and prosecute and identify people who are using the same type of tactics that were used in the Jim Crow south to frighten and intimidate blacks from participating in the voting process.”

“That’s why this is done – to strike fear and intimidation in the hearts of these people who want to come and hear the candidate of their choice,” added Clarke.

“This is constitutionally protected. This is a Civil Rights violation and they are entitled to that same equal rights protection under the law as anybody else or any of the other protected class. It appears to me that the United States Department of Justice doesn’t care what happening because these people are white and they’re Trump supporters.”

As we reported yesterday, some of the victims of the violence were also Hispanic Trump supporters who were brutally assaulted simply for carrying pro-Trump signs.

Sheriff Joe Arpaio said that the scenes in San Jose last week had left him fearing for Donald Trump’s safety and that he would be “watching his back” when Trump visits Cleveland for the Republican National Convention.

“When you go destroying police cars, they should be in jail, so I don’t know what’s going on at San Jose,” added Arpaio.

After the San Jose police department was accused of standing down and allowing the violence to unfold, it emerged that police chief Eddie Garcia is affiliated with the far left group La Raza, a Mexican race supremacist organization.