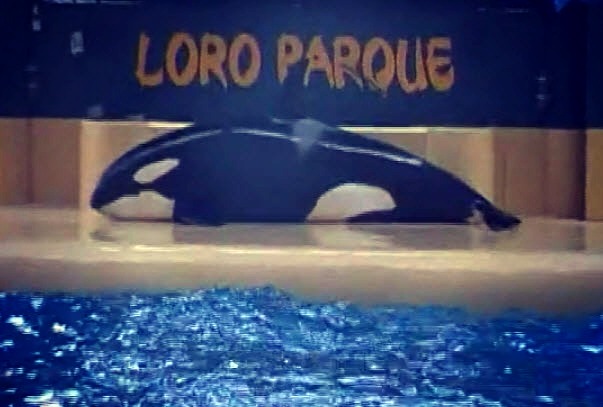 This is pretty sad.

Parents and their children were horrified when an orca whale named Morgan apparently tried to commit suicide in front of everyone in the middle of one of its shows at Tenerife’s Loro Parque, where it is on loan from SeaWorld to perform.

The whale beached herself for over ten straight minutes without even attempting to get back in the water before the visitors were forced to leave the theater.

Killer whales sometimes come ashore to hunt but rarely do they spend this long out of the water as their body weight can crush their internal organs. Even while sleeping they maintain movement in the water.

The latest footage comes only weeks after a video reportedly showing the same whale emerged showing her banging her head against a metal gate in an apparent attempt to escape her enclosure.

And it gets worse…

Despite being rescued under a permit which only allowed Morgan to be rescued, rehabilitated and released, she is used as part of a show at Loro Parque.

Morgan is the only orca in the park that was born in the wild. According to campaigners she is bullied by the other orcas in captivity.

Do people even realize what they’re actually watching when they watch these animals “perform” anyway?

Well, it gets even worse…

Former trainers have come forward to say these animals are forced onto a diet of multiple drugs just to survive the chronic stress of their living conditions as “performers” at these parks (via The Dodo):

“We had whales who were on medication every single day of their life,” said John Hargrove, who was a trainer at SeaWorld San Diego and SeaWorld San Antonio for a combined 14 years. Hargrove recently wrote a book about his experience at the park.

The Dodo spoke to Hargrove and former trainers Samantha Berg, John Jett, Carol Ray and Jeffrey Ventre about the medications they administered to captive orcas at SeaWorld’s three parks. From antipsychotics (to decrease testosterone) to benzodiazepines (to calm the animals), the orcas needed a wealth of drugs to survive in a tank, and some of the drugs were so powerful they even put humans administering them at risk, the trainers allege.

The list include a bevy of antacids, contraceptives, antibiotics, antipsychotics, and benzodiazepines.

A general admission to SeaWorld San Antonio, for example, is $55 just by the way. So people are paying hundreds of dollars to take the whole family to go watch a bunch of highly intelligent, forcibly doped up, suicidal animals do tricks in little water cages for them. Gee. Neat.