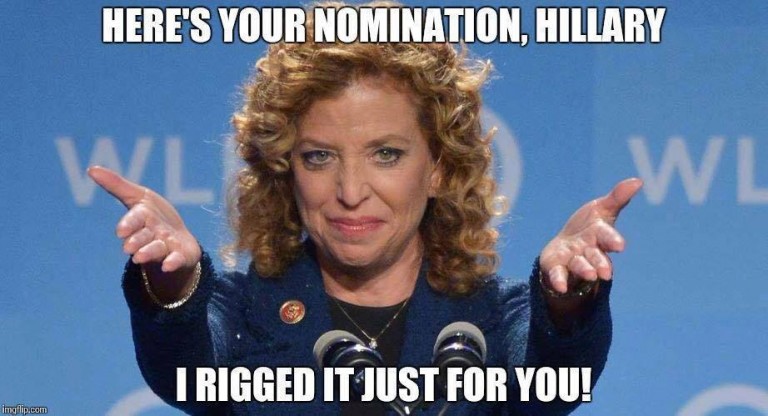 It’s lights out for democracy. No surprise for those who have been paying attention. But if this is your first time through it, this election has been totally rigged. From the start, it was clear that Hillary had been chosen and given a path. Possibly it was a concession forged back in 2008 in which she agreed to stand aside for Obama in exchange for “her turn.”

Antithetical to our deeply held democratic processes, the entire 2016 contest is and has been rigged so that one person’s quest for power can be satisfied. 2008 was an embarrassing stumble. 2016 is the last pageant she’s willing to go through, and she was determined to win. This time, the title is hers. Period.

Thus, the timing, carefully coordinating, of her “clenching” the nomination. On the eve of the California primary – where her fierce opponent Bernie Sanders was threatening to win – an announcement made in the mainstream news essentially pulled the rug out from under the primary by rendering it useless.

To recap, the Hillary announcement was a fraud to seal/steal the nomination before it could be contested:

As we detailed earlier, on a day with no voting, based on AP’s surveys of the un-named anonymous super-delegates, they stated that Hillary had the 2383 delegates to secure the nomination… as Mike Krieger exclaimed,

Last night, the American public witnessed the most egregious example of mainstream media malpractice of my lifetime. By declaring Hillary Clinton the Democratic nominee based on the pledges of superdelegates who have not voted, and will not vote until the convention on July 25th, the Associated Press performed a huge disservice to American democracy on the eve of a major primary day, in which voters from the most populous state in the union (amongst others) head to the polls.

Declaring her ‘delegate count’ totals adequate to crown her the winner sent the message to Bernie supporters loud and clear that there wasn’t to be any further challenges, or any further efforts at contesting the DNC convention. It’s over, and Bernie should squash the notions of contesting it on the floor. Mine….

Here’s her self-congratulatory speech declaring that she has ‘made history.’

Scripted with the media, Hillary declared that she was the party’s nominee, and had made history as the first woman to do so.

Though the super delegates themselves don’t officially vote until the convention in late July, she clenched it.

In short succession, and with equally careful timing and scripting, President Obama and Sen. Elizabeth Warren endorsed Hillary and further dampened opposition from anti-Hillary factions in the Democratic party.

In the full spirit of taking no chances, Hillary has openly taken control of the election process itself.

Her crony, Debbie Wasserman Schultz, has maintained strict obedience inside the Democratic party, and cleared the path to make sure everything centered around the former First Lady, Senator and Secretary of State who would literally say anything to anyone, and put up with any indignity in order to claim her place in history.

In the end, she will be noted for her ascent to power through dynasty, covert intelligence work, elite financing and most of all, unwavering commitment to graft, deception and evasion (among other tactics) in order to succeed at all costs.

Her avarice and ambition will be duly noted in proportion with this late hour of the collapsing republic that is indeed tuning itself to the familiar patterns of history. Her moment of glory is indeed transient, and many more corrupt potentates will take brief power in a quick succession of brazen and ugly steps to the bottom before things even out again.

That is the cycle of history. Tyrants and patriots make the history books. The books are written by the winners, so the identities of the cast of characters are often distorted. But Hillary’s place in history is plain enough to see.

Her coronation will come only after going through a gauntlet of every scandal dredged up again from the past. An imminent indictment from the FBI for her crimes pertaining to the email scandal. None of it will stop her, and she will proudly carry the battle as one more notch on her belt.

A showdown with the primetime boss himself, where Hillary will duke it out, blow for blow, with talking points tailor-scripted to the hypocrisies of Donald Trump and the tired platitudes of establishment power. Trump’s goldmine of controversial and “offensive” sound bytes and positions gives her a path to victory, though it seems more likely that the people would spit her out quickly enough in a fair vote.

But there hasn’t been a fair vote.

There hasn’t been, and there won’t be.

Deep down, everyone knows that.

The tactics of the Democratic party (in suppressing Bernie Sanders), like those of the Republican party in 2008 and 2012 (in suppressing support for Ron Paul) are blatant displays of corruption that completely signal the end of days for the rule of law, the Constitution, the common sense that used to come with growing up in middle class neighborhoods, the times when people were proud of the their country. When the sold out system wasn’t quite so obvious.

But today, the corporate sponsorship and elite donors that have long ago bought and sold political power for their own ends are transparent and plain to see. The game is rigged. It is so rigged like a casino, that there is little point in resisting its gravitational power. There will never be a way of ending the corruption through voting. The House always wins.

With all the entertainment and controversy that Donald Trump’s candidacy has brought to the forefront, Hillary has remained on course, and calculated solely towards capturing the prize of the presidency. Her backing has always been in place for a president who they know can always be bought at a price.

Having learned a painful 8 year lesson from her 2008 bid stolen away by Barack Obama, Hillary has now maneuvered to declare victory based on the presumption that she will win the nomination – in order to brush aside the challenges of Bernie Sanders and his supporters.

And there are boatloads of progressives and socialists who are pissed off and angry about Hillary and calling it stolen. They’re right. It was stolen:

Conservatives and so forth should be angry about Hillary for the same reasons – the widespread interference of fair elections.

The theft of California through electronic voting fraud and other means is clear to anyone who was paying attention (though few were in the wake of her announcement).

Bernie’s movement appears to have swelled much larger than the elite may have realized. But it really isn’t all that surprising when you consider the anti-establishment sentiment Sen. Sader’s tapped into the discontent of the youth with the current state of economic struggle, disillusionment and resentment at corrupt leaders – typified by Hillary, and the trail of dead that follow her and haunt her in vain.

Stealing the vote in California, with an unlikely margin that approached 20 points, was actually pretty obvious.

As the L.A. Times described it, the primary process was “chaos” and broken machines, flimsy forms and long lines served to disenfranchise votes:

California voters faced a tough time at the polls Tuesday, with many voters saying they have encountered broken machines, polling sites that opened late and incomplete voter rolls… many California voters were handed the dreaded pink provisional ballot — which takes longer to fill out, longer for election officials to verify and which tends to leave voters wondering whether their votes will be counted.

Before Tuesday’s vote, Bernie Sanders supporters accused the media of depressing Democratic turnout by calling the nomination for Hillary Clinton before polls opened in California.

It is a final coup in a Democratic primary that has been slanted towards her from the beginning. California would not have even necessarily changed the outcome, and yet nothing could be left to chance.

Let’s be honest… it was a legalized cakewalk instead of anything resembling an election. The outcome was rigged for a very special Queen.

Hillary faced no real challengers from the very start.

Other rivals who could have played the “woman” card, too, including Elizabeth Warren, did not even try to run. Biden nearly announced his entry into 2016 before being reportedly threatened behind the scenes not to run, suddenly changing his mind to spend time with his grieving family.. As the sitting Vice President, Biden was perhaps the only obvious threat to Hillary’s dominance in 2016, and thus was inconvenient to have around.

The pirate flag has been hoisted, and the course is set for November. The media is in on it. Legitimate government is totally out now. There is really nothing to prove that Trump wouldn’t take a fall for her, either.

These are truly dangerous waters.

It is a dictatorship, and it is a new line of Caesars exercising power beyond reproach.

She is a usurper if ever there was one. Who will place bets on the end of the world as we know it starting on January 20, 2017?