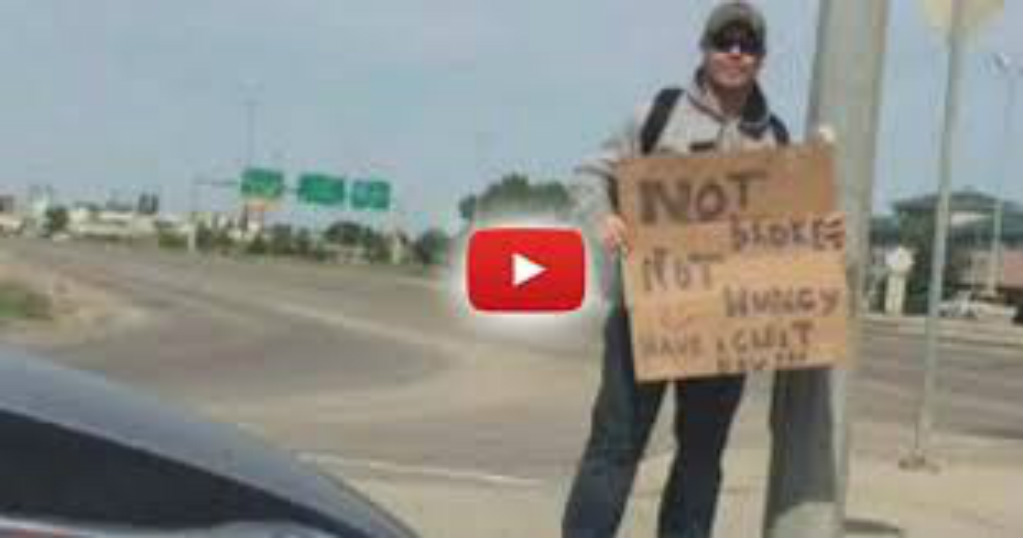 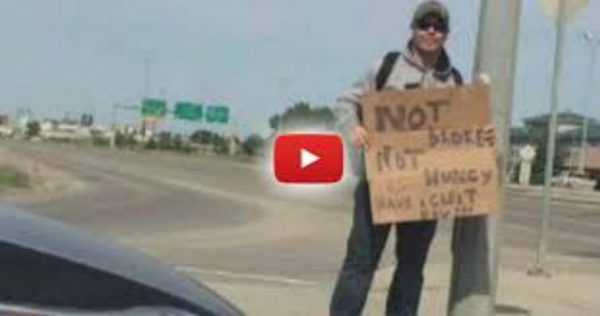 Regina, CA — Showing that there is no limit as to how low they will go to extract revenue from citizens, cops are dressing up like homeless people and ticketing them when they unbuckle to hand out spare change.

Dane Rusk was driving away from the mall this Wednesday when he saw a man who appeared in dire need of help. So, he did what any kind-hearted individual would do — he reached into his pocket, pulled out $3 and gave it to the man holding a cardboard sign.

“As I came up to the stop sign, I stopped and looked and I saw this homeless guy holding a sign,” Rusk explained. “I instantly felt sorry for him.”

“I reached out – I had to undo my seat belt, hang over and drop the change on the curb,” Rusk told CTV Regina.

Instead of receiving the instant gratification from helping others, however, Rusk received a $175 traffic ticket for unbuckling his seatbelt in order to get the $3 out.

After pulling away from the homeless man, an armed extortion agent swooped in to issue the ticket.

The needy homeless guy who was holding up the sign was an undercover cop, who somehow disgustingly thinks extorting good Samaritans is a public service.

CTV reports that Rusk said he was “pretty shocked” by the incident. “The ticket’s $175 and the three dollars I gave to him – I’m out $178 all because I was trying to help out a homeless guy.”

Police in Regina remain unapologetic, even after news of their unscrupulous scheme went public. They claim it is part of a project at intersections to keep the town safe. Safe from what? We have no idea, as it appears they are the only ones posing a danger to motorists.

“Intersections are probably one of the most critical areas when it comes to accidents obviously, and our high-volume intersections are ones that we tend to target,” said Regina spokesperson Evan Bray. “So we will run random intersection projects throughout the city.”

How exactly Bray thinks issuing a $175 dollar threat of violence to a man for donating to a homeless person stops an accident, is entirely unclear.

This move by police is a new low in the government-sponsored extortion racket and is a testament to what police really ‘protect’ — their bottom lines.

Sadly, this is not the first time the Free Thought Project has reported on cops posing as homeless people to separate citizens from their hard-earned money.

Last July, in an apparent attempt to give rise to their bottom line, the San Bernardino Police Department took to the streets dressed as panhandlers. Four officers donned their cardboard signs and walked the street looking for vile criminal law breakers who’d dare to be inside a vehicle without their seat belts on.

Curiously, they too failed to mention how exactly extorting money from people for victimless crimes, such as not wearing their seatbelt, contributes to the safety of the community. Probably because it doesn’t. Seat belt violations are merely a scam to allow officers to “lawfully” extort money from the citizenry so they can keep getting their scheduled promotions.

In fact, the enforcement of laws for victimless crimes, in reality, makes society less safe. In a recent study, it was revealed that locking people in cages for crimes in which there is no victim, almost guarantees that they will become a real criminal. Bravo police state. Bravo.