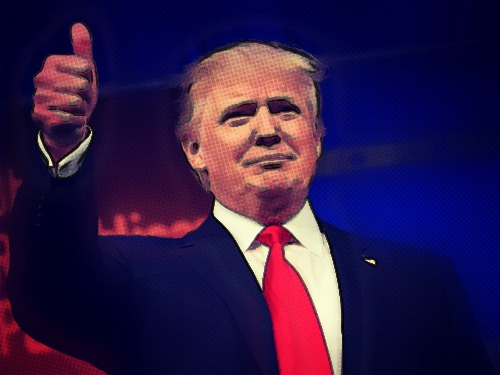 Well, well, well, the Donald comes out with a factual remark, the media practically tars and feathers him, and many in the Republican camp are ready to stage a coup at the upcoming GOP convention in July. Donald Trump called out Judge Gonzalo Curiel as being Mexican who would oppose his border wall. Curiel is presiding over the class action suit against Trump University. Trump has indicated that Curiel being Mexican has loyalty to Mexico.

The remarks by Trump started a “look-see” into Judge Gonzalo Curiel as well as the case against Trump University by many in the media. Upon investigation, Judge Gonazalo Curiel was revealed to be a member of the La Raza Lawyers of San Diego and a member of the Hispanic National Bar Association (HNBA). The Hispanic National Bar Association declared a boycott of all Trump businesses after he announced his bid for the presidential candidacy.

According to the Daily Caller, Curiel listed on his 2011 judicial questionnaire his membership in the La Raza Lawyers of San Diego, which was confirmed through the judge’s office. Curiel spoke at two of the groups’ receptions and the group honored him last year. Moreover, Curiel served on the selection committee in 2014 of the La Raza Lawyers of San Diego Scholarship Fund, his name appears on the last page of the document, which awarded “six of seven recipients” $1500 to $1600 who were born in Central America.

Added to Curiel’s “distinction” is his support for illegal immigration, being a Hillary Clinton supporter and his appointment to the bench came from one Barack Hussein Obama Soetoro Soebarkah.

Yet, this judge has not recused himself from the case based on “conflict of interest” since the Hispanic National Bar Association called on a boycott of Trump’s businesses due to their assertion of being “racist.”

Despite the fact Trump has surpassed the number of bound delegates necessary to win the nomination outright, some conservatives are now urging their fellow Republican party members to change the convention rules or vote their consciences at the RNC convention next month in Cleveland.

Conservative radio host Erick Erickson said Trump’s comments referring to the judge’s race could provide the ammunition necessary to push him out in July.

Well, if the shoe fits, wear it. By Trump pointing out Judge Curiel being Mexican and the judge’s association with the La Raza Lawyers of San Diego and the HNBA, he is highlighting the partiality the judge would have toward ruling against Trump University. In other words, the judge is compromised, decreasing the likelihood of a fair hearing. Curiel also public supports illegal immigration – violation of the duly passed constitutional immigration law. When a judge supports lawlessness openly, it should be reason enough to remove this man from the bench.

Speaking to Yahoo! News, Erickson stated, “There is a rapidly moving train toward the convention to try to obstruct it at the convention. Trump in the last 72 hours has given hope to people who think it’s now possible. He’s starting to give everybody hope that he should be stopped at the convention.”

Erickson has been one of Trump’s most harsh critics. However, Erickson conceded that if Trump were to clean up his act, the hope to stage a coup would go away.

Hugh Hewitt, conservative radio personality and host of The Hugh Hewitt Show who predicted that Sen. Ted Cruz would secure the GOP nomination and a contested Republican convention in July, is now urging the GOP to drop Trump at the convention.

On his radio show, Hewitt predicted, “I want to support the nominee of the party, but I think the party ought to change the nominee. Because we’re going to get killed with this nominee. They ought to get together and let the convention decide.
And if Donald Trump pulls over a makeover in the next four to five weeks, great, they can keep him.”

Steve Deace, yet another conservative radio host, urged delegates bound for the Republican convention to “step up to the plate.”

“History is calling you to step up to the plate. You have not a choice, but an obligation. You must save the country,” Deace said, targeting delegates on his radio show.

Deace reiterated his point in a column stating that delegates at the convention are free to vote their conscience, whether they are bound or unbound, and the rules “are in place to protect the system from just such a leader.”

Remember, Donald Trump has secured enough delegates necessary to win the nomination. Yet, these individuals, along with others, are urging delegates to vote their conscience at the convention or urging the GOP to change the convention rules. This is all over Donald Trump calling out a judge who clearly has a conflict of interest that is presiding over the case involving Trump University.

The real question that should be asked of any of these individuals is, “what is wrong with pointing out a judge’s bias when that judge is being unethical?”

Judge Gonzalo Curiel is Mexican and a member of two Hispanic groups that have declared openly the dissention against Donald Trump. Moreover, Curiel is charged with presiding over the lawsuit against the university bearing Trump’s name while refusing to recuse himself because of those associations. Trump’s personality does not lean toward the tactic, subtle, political correct nature toward which society has gravitated. Trump spoke in true “Trump-bold” fashion while stating fact.

Judge Curiel was born in Indiana to parents who emigrated from Mexico, becoming citizens after marrying in 1946. Several sources confirm his membership in the HNBA and the La Raza Lawyers of San Diego group. Curiel happens to be a judge appointed by Hussein Soetoro.

In fact, Breitbart reported, just two days ago, the co-founder of the lawyer’s group, Mario Obledo, which Judge Curiel associates, declared that Hispanics would take over “all the political institutions of California.” Obledo stated that in five years, Hispanics would be the majority population in California. Not stopping there, Obledo indicated California’s white population could “go back to Europe.” Obledo also threatened to burn a sign stating, “Illegal Immigration State,” someone had placed on the California border.

Nothing there to indicate Judge Curiel might have a conflict of interest that could result in an unfair ruling, which would be reason to recuse oneself. (sarcasm, rolls eyes)

While Donald Trump is not subtle, bluntly speaking fact, the lamestream enemedia, along with conservative media personalities, figuratively drags Trump under the bus and runs over him while trying to deny him the nomination over his comments about Curiel. Yes, Trump called the judge a “hater.” Based on his professional associations and support of lawless illegal alien invasion, one could come to that same conclusion. As the old saying goes, “birds of a feather flock together” and “you are judged by the company you keep.”

Instead of focusing so much on trying to “dump Trump,” conservative media personalities should be focused on highlighting the numerous crimes of one Hillary Rodham Clinton. Hussein Soetoro came out in support of Hitlery, saying she was the most qualified to hold the office. Interesting that Hussein Soetoro should say that now, when back in 2008, he claimed that Hillary Clinton is what is wrong with politics and would say anything to get elected. In fact, Hussein Soetoro called both Clintons dishonest saying Bill made “statements that are not supported by facts.” A year earlier, Hussein Soetoro called the Clintons “Bush-Cheny lite.”

Well, if criminal acts qualify one to become president, no one is more qualified than Hitlery. And, no one is more qualified to make that call than Barack Hussein Obama Soetoro Soebarkah. However, the mere appearance of criminal activity, actual crimes committed, acts of treason and cover-ups should disqualify an individual from seeking public office at any level. All of these scenarios apply to Hitlery and Bill. Yet, here the Democratic Party is with her assuming the position of presumptive nominee.

But, regardless of the Clinton crimes and their seedy trail of bodies stretching from Arkansas to California to New York and back to Arkansas, Trump issuing statements based on facts and drawing a conclusion from those facts is raked over the coals.

Like him or not, Trump has secured the required number of delegates to be the GOP nominee for presidential candidate. He has become popular with many voter bases. Should the GOP succeed in staging a “conventional coup,” it could spell real trouble for the party, possibly helping to secure a Hillary win, if another lame duck candidate is put forth as the Republican choice.