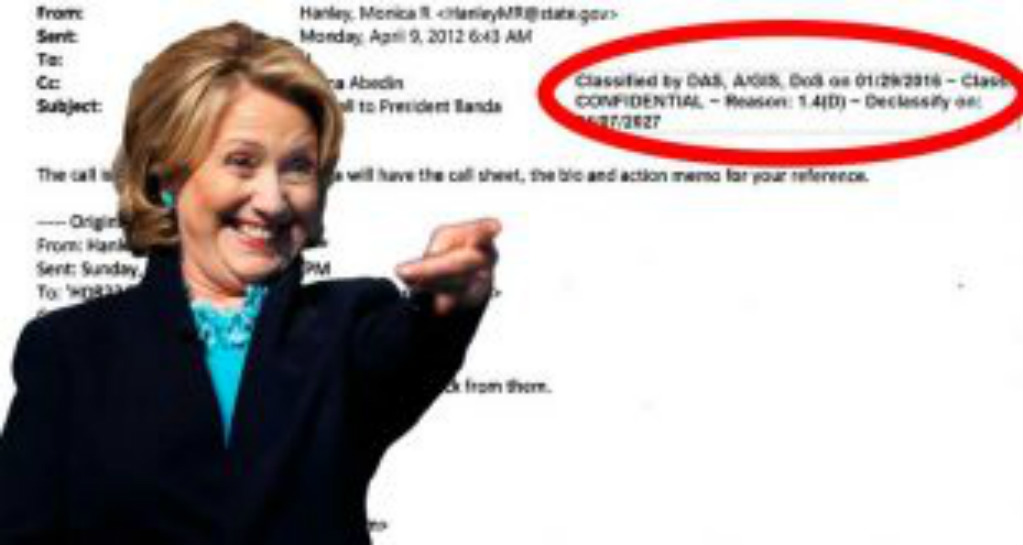 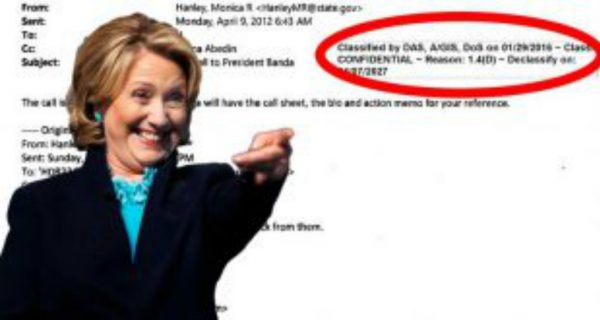 It seems that no matter what Hillary Clinton does, she remains the champion of the establishment. Perhaps, because their own corruption is so rampant, they are unable to gauge what level of corruption society is able to handle, and they see no problem promoting a war mongering criminal sociopath as their representative.

Clinton has been caught over and over again lying through her teeth, yet she is still cheered on by the elite and her supporters who are unable to see past her superficial ridiculousness.

“Is this the email the FBI’s star exhibit against Hillary Clinton (“H”)?” Wikileaks tweeted.

Is this email the FBI's star exhibit against Hillary Clinton ("H")? https://t.co/MsKTZUJdHB pic.twitter.com/VkeA6X7Bkx

At issue is an email thread, beginning with a note from Clinton’s former chief of staff at the State Department, Jake Sullivan, which tellingly states:

“They say they’ve had issues sending secure fax. They’re working on it.”

To which an apparently impatient Hillary replies:

“If they can’t, turn it into nonpaper w no identifying headline and send nonsecure.”

What she’s requesting from Sullivan is that he strip sensitive information of anything marking it as sensitive so it can be sent through without following security protocols. Clinton, in other words, blatantly asked Sullivan to break the law — because she apparently didn’t want to wait.

Of course, this information was largely ignored by the mainstream and nothing came of it. Shortly after, in fact, the AP declared Clinton the winner of the Democratic presidential race, and Bernie was subsequently eliminated as competition.

On Wednesday, Clinton told Bret Baier on Special Report, “the fact is, nothing that I sent or received was marked classified, and nothing has been demonstrated to contradict that. “

While the email above shows proof Clinton directed her staff to lie and strip the markings off classified material, a new email released Friday night, shows undeniable proof that classified emails were sent — as it still has the “confidential” stamp on it. 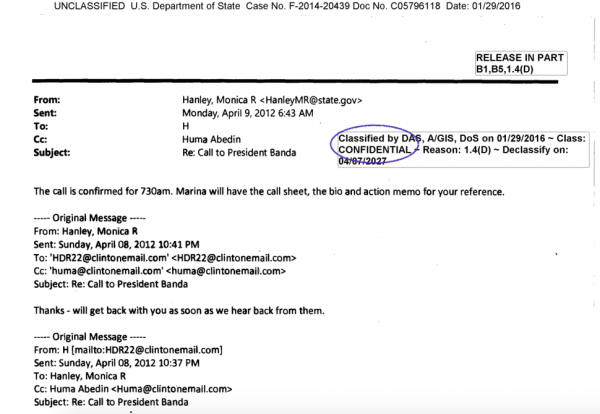 This 2012 email released by the State Department carries a classified code known as a “portion marking,” and that marking was on the email when it was sent directly to Clinton’s account.

The “C” — which means it was marked classified at the confidential level — is in the left-hand-margin and relates to an April 2012 phone call with Malawi’s first female president, Joyce Banda, who took power after the death of President Mutharika in 2012, according to a report from FOX News.

“(C) Purpose of Call: to offer condolences on the passing of President Mukharika and congratulate President Banda on her recent swearing in.”

“This system requires that standard markings be applied to classified information…Markings shall be uniformly and conspicuously applied to leave no doubt about the classified status of the information, the level of protection required, and the duration of classification.”

“A portion is ordinarily defined as a paragraph, but also includes subjects, titles, graphics, tables, charts, bullet statements, sub-paragraphs, classified signature blocks, bullets and other portions within slide presentations, and the like.”

Clinton is able to outright lie to the public, and no one cares. In fact, across the world last week, the sociopath was actually celebrated for her accomplishments as a woman. Is America so blinded by their rush to be politically correct that they would refuse to see a tyrant standing right in front of them?

Sadly, the answer to that question is an undeniable, yes.

As Americans cheer their next despot into a house built by slave labor, their cognitive dissonance will forever be ingrained in human history. 2016 will forever be known as the year Americans figured out the entire system was rigged against them, and they couldn’t have cared less.