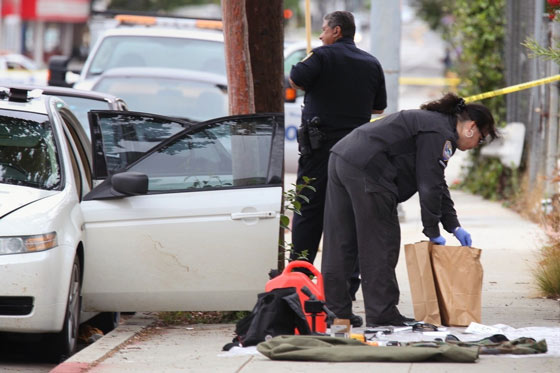 Santa Monica police report that a heavily armed man with a weapons cache of firearms, ammunition and bomb making materials has been arrested ahead of the L.A. Gay Pride parade.

It’s unclear what the Indiana man’s intentions were or if they are related in any way to the Orlando massacre at a gay club early Sunday morning.

Assault rifles, ammunition and materials that could be used to create explosives were found by Santa Monica authorities early Sunday morning in the car of an Indiana man who said he was in town for a Gay Pride parade, The Los Angeles Timesreported.

The arrest comes just hours after a shooter opened fire on a gay nightclub in Orlando, killing 50 people and wounding at least 53 more before dying in a firefight with police.

While investigating a suspected prowler, Santa Monica patrol officers on Sunday encountered an individual who said he was waiting for a friend, The LA Times reported. The man was reportedly seen knocking on doors and loitering in the area, Santa Monica Police Spokesperson Saul Rodriguez told The Times.

When officers inspected the man’s white Acura, they found the weapons and ammunition cache as well as tannerite, a binary explosive that could be used to create a pipe bomb.

Tensions around the country are reaching a fever pitch as a lone gunman in Orlando, Florida left at least 50 people dead and 53 more injured following the most deadly mass shooting in U.S. history.

President Obama Hints At Gun Control In Orlando Mass Shooting Speech: “This Could Have Been Any One Of Our Communities”

Orlando Killer Worked For Company Transporting Illegal Immigrants Inside US; Was Interviewed By FBI 3 Times