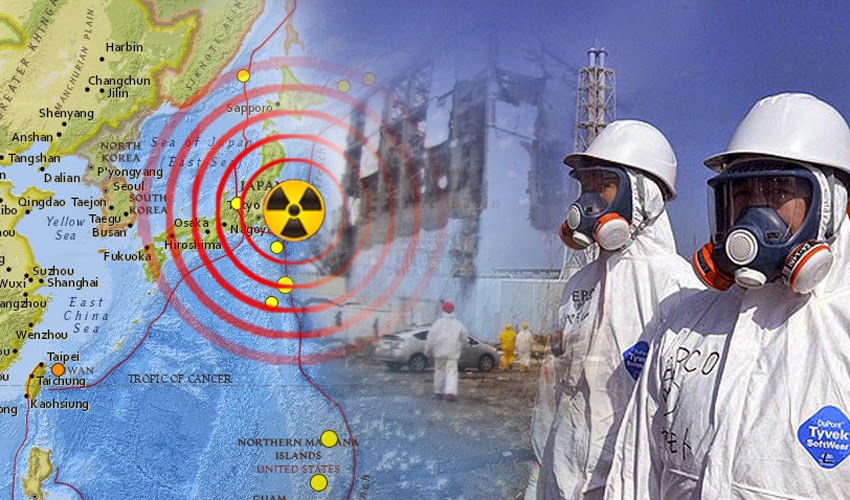 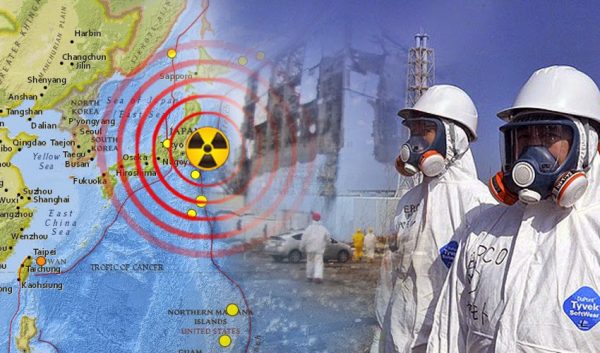 As usual, the Hussein Soetoro administration, Congress and the lamestream enemedia have made sure to keep the citizens of this nation focused on “fluff ‘n stuff” while more important issues are pushed to the back burner or ignored altogether. Yet, the mass shooting in Orlando, Florida receives almost constant news coverage from the main alphabet news agencies. It doesn’t take long for this tragedy to be twisted into a push for gun control. But, an incident that could potentially be an extinction level event has received little news coverage over the last five years — the multiple reactor meltdowns at the Fukushima Daiichi Nuclear Plant in Japan.

What is happening at Fukushima? It’s almost as if there is a mainstream media blackout on information about its status. It has not gone away. It has not subsided. In fact, the situation at Fukushima is far worse than what anyone thought. And, the media is collusion with the government to cover up the severity. The reason why is fairly simple. This is the worst nuclear plant disaster in global history and there was never a plan in place to deal with this severe of a nuclear power plant disaster. As it stands, the clean-up and “fixing” of Fukushima is almost impossible.

Immediately after the incident, news reports were plentiful despite the lack of accurate data and updates from the government of Japan. As time went by, the media stories focused on the clean-up efforts, keeping reactor four from meltdown and downplaying concerns of aging nuclear plants that could suffer a similar fate, meltdown, here in the united States. Experts on everything related to nuclear power plants, reactor cores, and the dangers of radiation released by the accident weighed in with their opinion. Then, as if someone turned a switch, the media took Fukushima off the front burner and threw it out the window producing an illusion the crisis was over and the danger gone. Occasionally, news reports surface about the containment efforts of irradiated water, radiation contaminated fish, unusual diseases found in marine life, and the safety of food sources gleaned from the Pacific Ocean due to Japan’s TEPCO releasing tons of irradiated water into the ocean.

However, hiding in plain sight early on was information indicating the disaster was far worse than the mainstream media, the federal government and the government of Japan had reported. While the news reports focused primarily on the reactor fuel cores, the media ignored the danger of the spent fuel pools. In a report housed at Infowars.com, the true nature of the disaster was exposed on March 15, 2011.

Each reactor building pool holds 3,450 fuel rod assemblies and the common pool holds 6,291 fuel rod assemblies. Each assembly holds sixty-three fuel rods. In short, the Fukushima Daiichi plant contains over 600,000 spent fuel rods – a massive amount of radiation that will soon be released into the atmosphere.

That day, a report by the LA Times indicated that 70% of the spent fuel rods were damaged, meaning radiation is being emitted by the rods or will be soon.

As the world would learn, Fukushima reactors 1, 2, and 3 suffered a complete meltdown, reactor 4 riddled with fires, and reactors 5 and 6 were damaged. Worse still, there were explosions at reactors 1 and 3 blowing “apart the respective containment buildings but left the vessels intact. Or so we think,” and an additional explosion at reactor 2. Remember, the spent fuel pool on the Fukushima reactors were stored on top of the reactors, with one SFP being separate, on ground level, which received damage during the tsunami. So, if explosions happened at reactors 1 and 3 blowing apart the containment buildings and later reactor 2, where did the spent fuel rods go that were stored above the reactors?

Unlike the reactors, spent fuel pools are not—repeat not—housed in any sort of hardened or sealed containment structures. Rather, the fuel rods are packed tightly together in pools of water that are often several stories above ground.

According to Robert Alvarez, “a former senior policy advisor at the Energy Department under Clinton and now a senior scholar at the Institute for Policy Studies,” spent fuel pools have never been considered a credible threat. However, it is these spent fuel rods that posed considerable danger. Alvarez described why just a few days after the disaster.

“The steel wall of the pool seems to show damage. All the surrounding equipment, including the two cranes, has been destroyed. There is smoke coming from reactor No. 3, and steam coming from the spent fuel pool next to it. That indicates that the water in the pool is boiling. And that means the spent fuel rods are getting hot and could start burning.”

According to thenation.com, “If the spent rods start to burn, huge amounts of radioactive material would be released into the atmosphere and would disperse across the Northern Hemisphere.”

With the spent fuel rod assemblies being ejected by explosion of three reactors since the SFP is situated above the actual reactor, are not the rods burning since no longer being stored in water to keep the rods cool? The ejection of spent fuel rod assemblies by the explosion of three reactors means the rods are not being cooled, would start to burn and release plutonium and uranium, in the case of reactor 3, “in the form of vapor into the atmosphere.”

The fuel rods must be kept submerged in water. Why? Outside of the water bath, the radioactivity in the used rods can cause them to become so hot they begin to catch fire. These fires can burn so hot the radioactive rod contents are carried into the atmosphere as vaporized material or as very small particles. Reactor no 3 burns MOX fuel that contains a mix of plutonium and uranium. Plutonium generates more heat than uranium, which means these rods have the greatest risk of burning. That’s bad news, because plutonium scattered into the atmosphere is even more dangerous that the combustion products of rods without plutonium.

Murphy called this situation, “Chernobyl on steroids,” first coined by Arnie Gundersen, “a nuclear engineer at Fairewinds Associates and a member of the public oversight panel for the Vermont Yankee nuclear plant, which is identical to the Fukushima Daiichi unit 1.”

On May 11, 2016, ENENews reported the entire nuclear core of reactor 3, which contained plutonium, was ejected into the environment. It turned out the explosion was not a hydrogen explosion, but mainly steam coupled with a hydrogen explosion. An ENEnews,com article published findings on May 19, 2016, indicated “billions of pieces of Fukushima nuclear fuel have spread pretty much everywhere.” Arnie Gundersen, Fairewinds Associates Chief engineer and former nuclear engineer, explained the difference between the explosion of an atomic bomb and the explosion of a nuclear plant.

Most of the bomb exposure was from a direct flash that was over in seconds. There wasn’t a significant amount of contamination on the ground because the bomb went off 1,000 feet in the air. So there was not a lot of radiation residual left on the ground for hot particles to get into people’s lungs… That’s not what we’re seeing at Fukushima Daiichi. Everything I’m finding here is millions and billions of very, very small particles that are spread pretty much everywhere. We’ll know a little bit more about that in the future… There’s no comparison between a bomb and what happened at Fukushima. A bomb obliterated maybe a pound of uranium and it was a thousand feet in the air, so most of it went up almost immediately; whereas each of the nuclear reactors at Fukushima had 100 tons of uranium in them so that the quantity of radiation that’s spread out throughout the countryside is orders of magnitude higher at Fukushima than it was at Nagasaki. [emphasis ENEnews.com]

ABC Australia’s Mark Willacy received an invitation to tour the Fukushima Daiichi nuclear plant and discovered this unsettling information. The report on May 24, 2016, uncovered this information; however, Kirk James Murphy indicated the possibility of missing tons of fuel in 2011.

Along with the rest of the planet, Washington’s looking at the risk of a potential catastrophe. At least when it comes to finding the fuel rods from reactor 1, Washington possesses some unique assets. One asset – the secretive National Reconassiance Office – runs the spy satellites remote sensing devices that enable US national security to spy on planet Earth. The NRO’s slightly less secretive cousin over at the Pentagon is the Defense Intelligence Agency. The DIA, in turn, controls MASINT “measures and signatures technologies”.

With assets like the NRO and the DIA’s MASINT capacity, even an Obama administration that couldn’t find out millions of barrels of Corexit and crude oil would poison the Gulf should be able to help Japan’s Fukushima plant locate their missing fuel rods. And do so before the missing rods – or any of the other pools of fuel rods in Japan’s stricken reactors – ignite Chernobyl on steroids.

Once Obama and his generals have found the fuel rods, let’s hope they’ll time out from Gridiron dinners and collateral damage and let the Americans who pay for all the fancy spy technology know what’s happening. Because now that Americans are hearing CNN’s Dr. Gupta talking about potassium iodide (KI) to prevent radiation toxicity, they’re going to be wondering if they need to take KI. As long as we don’t see massive uncontrolled radiation releases from the stricken reactors, they probably won’t. Should we see Chernobyl on steroids, Americans may need a whole lot more than KI. And until the spent fuel rods are located, there won’t be enough information to let Americans plan how to protect their loved ones. Unless we all learn the fuel rods have caught fire.

As stated earlier, Fukushima reactor 4 was riddled with fires. The ejection of spent fuel rod assemblies and reactor explosions resulting in “missing” tons of fuel means the meltdown is more than likely burning, since outside of the water needed to cool it. This disaster has resulted in the occurrence of uncontrollable nuclear fission. More than likely, the world is witnessing “Chernobyl on steroids” as the media and world leaders maintain their silence on the severity of this disaster.

To keep abreast of the Fukushima disaster, the following sites are recommended.

The YouTube channel featuring Conrad Miller, MD, provided an update on Fukushima on April 24, 2016. Dr. Miller has over the years since the Fukushima disaster produced videos to update the public.

To view other excellent videos and receive information on Fukushima, access YouTube.com and enter “Fukushima” in the search section.

Below are interesting Fukushima documentation to review.

Fukushima, The Story No One is Talking About with Joseph Montgomery, 4/19/2016

A pictorial photographic documentation of the damage in Japan from the 3/11/2011 tsunami, earthquake and the Fukushima disaster by polish photographer, Arkadiusz Podniesinski.

With the lamestream enemedia news interested in “reality TV” and dog and pony shows to spread propaganda to support the Hussein Soetoro administration’s agenda, it is up to citizens to inform themselves. It becomes a difficult task when a foreign nation withholds information valuable to other nations and populations. With the discovery of increasing severity with Fukushima, this will be a lifetime generational disaster affecting the globe.