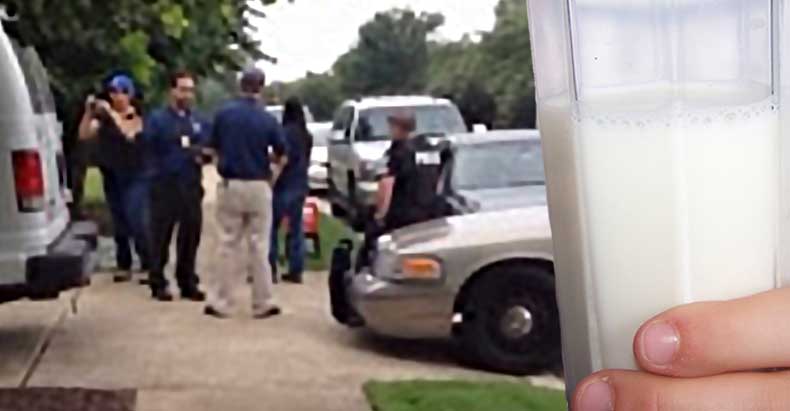 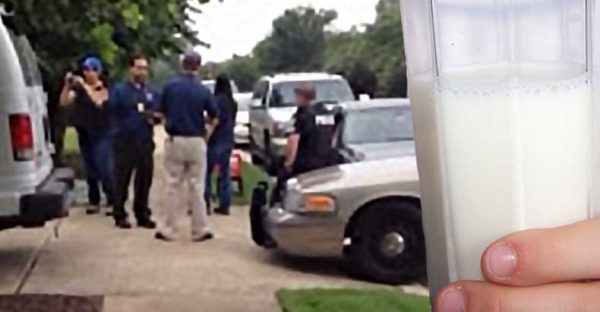 Austin, TX –The casual observer driving by the scene on May 26 might think a drug bust was going on, or that authorities were intervening in some actual nefarious activity. But no, the State enforcement agents were exerting their might on individuals doing nothing more than buying food from one another.

A mother with her two children was harassed to the point of tears by four inspectors from the City of Austin Health Department and Texas Department of State Health Services (DSHS), for organizing a group of customers picking up raw milk.

The milk came from a licensed, inspected dairy located two hours away from Austin, and the customers had hired a courier to bring it to them at a private home. It had already been paid for. This fully legitimate arrangement nonetheless served as the pretext for a shameful abuse of power.

“The inspectors proceeded to tell the customers that they could not take possession of the milk, ignoring protests that they had already paid for that milk. The inspectors also ignored the statement from the courier that he had a signed agreement with the customers making him their agent – and instead falsely wrote on the inspection report that the courier worked for the farmer.

The inspectors refused to speak to an attorney the courier called for assistance. Instead, one of the inspectors confronted the woman who had organized the group drop-off and demanded that she provide her driver’s license. When she hesitated, the inspector called a policeman over and then started to take pictures of her car with her children in it. After the woman broke down in tears, the inspector continued to question her to try to find out the names and locations of other drop points.”

If blocking the people in the driveway with a police car and haranguing them was not enough, the inspectors also filed a report on the raw milk farm, meaning it could be accused of violating its permit even though all regulatory requirements have been met.

The courier was not spared either, as inspectors filed a report and claimed that he must be licensed as a retail food establishment to deliver the milk. This same rule somehow does not apply to UPS or FedEx, which deliver food to people’s homes.

The frightening event is nothing short of intimidation against peaceful individuals and small businesses, instilling fear to subdue a movement that poses a threat to the status quo.

The industrialized dairy industry is a potent force in Texas politics, and it wields that power to stifle competition and limit freedom of choice. The Texas Association of Dairymen gloats about its success in helping to kill legislation that would expand the sale of raw milk in the state.

The fact is, both raw milk and pasteurized milk can be dangerous if produced under unsanitary conditions. However, raw milk is in the same “riskier” category as “raw oysters, raw sprouts, soft cheeses (raw or pasteurized), unpasteurized juices, raw or undercooked beef or poultry, and ready-to-eat foods such as deli meats.”

These things are legally sold everywhere, and people make the choice to eat them. People have the right to make this free choice with raw milk, too.

The consumption of raw milk from sanitary facilities is not a radical idea, as several western European nations have long been free to do so. Raw milk vending machines are even being installed in France, U.K., Spain, Italy, Slovenia, Austria, Switzerland and the Netherlands.

If raw milk posed any significant threat compared to pasteurized milk, it wouldn’t be expanding in these countries. People seek out raw milk for the nutritional benefits, as the pasteurization process destroys some nutrients and beneficial bacteria.

Back in the U.S., the freedom to choose what to eat is under attack. The May 26 detainment of individuals–for simply having a courier pick up legally produced raw milk for legal sale–is an escalation tactic in the name of State oppression and corporate monopoly.

“Is this the start of a broader campaign? We recently received documents indicating that, in 2013, the Ft. Worth health department reached out to other cities to discuss how to stop raw milk distribution. We’ve seen this with cottage foods before – one city health department tries a tactic to crack down on local food actions that they don’t like, and then they share the tactic with other cities who also implement it.

Whether you drink raw milk or not, this situation poses a simple question: Can the health departments ignore fundamental principles of law and individuals’ basic legal rights, and re-interpret regulations simply because they think you shouldn’t be eating or drinking something?”

Please visit the Farm & Ranch Freedom Alliance to find out more about the fight for food freedom. If you live in Austin or elsewhere in Texas, there are sample calls and emails you can use to contact elected officials.