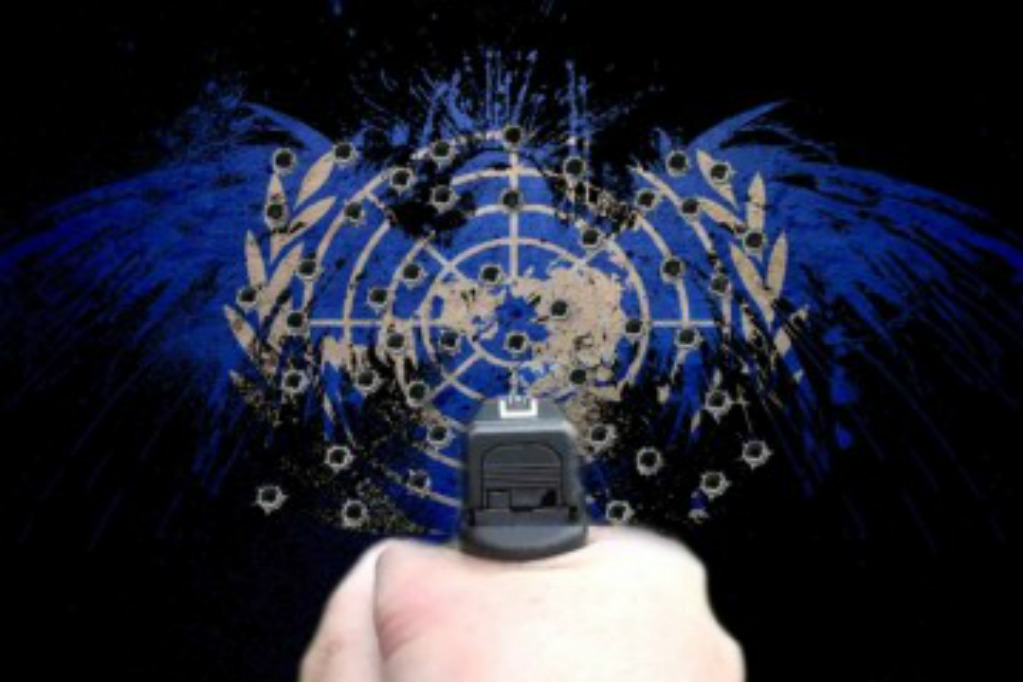 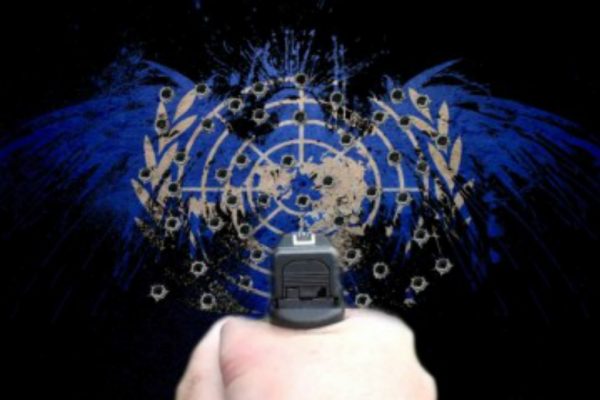 While many people across our union are focused upon the murderous acts of a madman in Florida, CAIR has called for better “Gun Control”, Obama hints at it, Homeland floats ‘national security’ as excuse to take guns and NAACP touts almost identical wording located within the UNODA/UNSATT documents. One does have to wonder, is there a much greater agenda at play?

Main stream media have consistently bombarded us with the “ISIS” “mass murderer” story, yet have failed to report on issues that effect the whole of the American people. Issues that would cause all of us to be unarmed leaving us at the mercy of madmen and criminals. I am speaking about the unalienable rights you were born with, which were confirmed in the second amendment to the Bill of Rights. Your right to keep and bear arms is being attacked via “agreements” by an un-elected body of individuals wishing to control, and disarm “We The People” leaving all of us helpless to defend ourselves, as was the case in Florida massacre.

The United Nations held the “Sixth Biennial Meeting of States to Consider the Implementation of the Programme of Action to Prevent, Combat and Eradicate the Illicit Trade in Small Arms and Light Weapons in All Its Aspects”. This meeting was held June 6 – 10, 2016 in New York. Located in their “Draft Outcome” report are many disturbing findings.

Document A/CONF.192/BMS/2016/WP.1/Rev.2 of June 10, 2016 titled “Sixth Biennial Meeting of States to Consider the Implementation of the Programme of Action to Prevent, Combat and Eradicate the Illicit Trade in Small Arms and Light Weapons in All Its Aspects” states the following:

3. States reaffirmed their respect for and commitment to their obligations under international law and the purposes and principles enshrined in the Charter of the United Nations, as well as those set out in the Programme of Action, including its eighth to eleventh preambular paragraphs

5. States welcomed the progress made in implementing the Programme of Action and the International Tracing instrument since their adoption, including on the establishment, strengthening and enforcement of national laws, regulations and administrative procedures to prevent the illicit trade and illegal manufacture of small arms and light weapons, the development of national action plans, the establishment of national points of contact, the submission of voluntary national reports and the strengthening of subregional and regional cooperation. They also welcomed progress made in implementing stockpile management and security, the collection and destruction of illicit small arms and light weapons, the marking of small arms and light weapons, technical training and information sharing

8. States reiterated the importance of national laws, regulations and administrative procedures, interagency coordination, and, where they exist, national action plans to the full and effective implementation of the PoA

25. States noted that the illicit trade in small arms and light weapons has implications for the realization of several SDGs, including those relating to peace, justice and strong institutions, poverty reduction, economic growth, health, gender equality, and safe cities and communities.

26. States underlined the importance of the full and effective implementation of the PoA and ITI for attaining SDG 16 and SDG Target 16.4.

31. To ensure that destroyed and deactivated small arms and light weapons are rendered permanently inoperable such that illicit reactivation is physically impossible, and recognizing the value of relevant best practices in this regard.

36. To take into account complementarities between the PoA and relevant subregional, regional and global instruments in which Member States participate in order to enhance, as appropriate, national-level coordination on the implementation of the PoA.

37. To share best practices in physical stockpile management and security, as well as permanent weapons reactivation, in order to prevent the diversion of small arms and light weapons to illicit markets, illegal armed groups, terrorists and other unauthorized[emphasis mine] recipients, including in conflict and post-conflict situations.

38. To continually assess national stockpiles for surpluses and to responsibly dispose, preferably through destruction, of small arms and light weapons that no longer meet operational needs.

Politicians such as Obama, Hillary Clinton and certain factions of main stream media have tried to gloss over the true nature of the UN SATT for years. The American people have been told the “UNSATT has nothing to do with disarming the people, nor the eradication of an individuals right to bear arms”. These statements have proven to be false, and misleading time and time again by the United Nations own documentation. See previous articles covered here, here,, here,

The United Nations openly shows within their own reports they must be successful in disarming the population as a whole in order to establish their UN Agenda 21 [aka: UN 2030 Sustainable Development Agenda]. The people of America must unify together in a joint effort across our union to stop these un-elected bodies from destroying our individual unalienable right to self defense before it becomes too late. Contact your representatives, your local sheriff’s, share this information with everyone. We must start visiting our sheriff’s and find out where they stand on protecting our unalienable rights. If they are unaware of their authority, be active and help educate them. CSPOA.ORG has a wealth of resources for Sheriff’s and Police officers. Let your Sheriff’s know you are holding them to the oath they took before taking their position, and you will make sure if they violate their oath they will be held accountable. “Acting under color of law” is no excuse.

states: “If two or more persons conspire to injure, oppress, threaten, or intimidate any person in any State, Territory, Commonwealth, Possession, or District in the free exercise or enjoyment of any right or privilege secured to him by the Constitution or laws of the United States, or because of his having so exercised the same; or

If two or more persons go in disguise on the highway, or on the premises of another, with intent to prevent or hinder his free exercise or enjoyment of any right or privilege so secured—

“As Thomas Jefferson opined, “When all government shall be drawn to Washington as the center of all power, it will render powerless the checks provided and will become as venal and oppressive as the government from which we separated”. The COUNTY SHERIFF is our nation’s LAST LINE OF DEFENSE, for the preservation and return to fundamental and individual liberty.”

“The bottom line; America was founded as a constitutional Republic, a representative form of government with extremely limited powers, confined within the parameters as expressly set forth by the supreme law of the land, the Constitution itself. In order for the Founders to perpetuate the principles of the Constitution they secured a proviso in Art. VI paragraph 3, which states very clearly, “…all executive and judicial officers, both of the United States and of the several States, shall be bound by oath or affirmation to support this Constitution…”

“Therefore, what is our supreme duty and responsibility? That’s right! To protect and defend, the U S Constitution! There is nothing we could do, that could come even close to justifying any peace officer in this country failing to keep his oath of office.”

Now more than ever our people need to arm themselves, train, and be prepared to defend the innocent from terrorists and criminals. Police are unable to protect you when every second counts, as proven in this massacre. It is your duty and your right to protect yourselves, YOU not the police are and always have been the first responders. By working together, we can defeat this tyranny. NOW and not tomorrow we must Stand Up, Stand Strong, Stand United, and say NO MORE to their gun grabbing agenda. Semper Fidelis

UN Agreement Should Have All Gun Owners Up In Arms; Forbes June 7, 2011

UNODA;Draft Outcome of the Sixth Biennial Meeting of States to Consider the Implementation of the Programme of Action to
Prevent, Combat and Eradicate the Illicit Trade in Small Arms and Light Weapons in All Its Aspects; New York June 6-10 2016

UNODA: Sixth Biennial Meeting of States on the Programme of Action

United Nations: Transforming our World, The 2030 Agenda for Sustainable Development

The Washington Post: Clinton calls for a new ban on assault weapons, 12 years after the last one expired

hillaryclinton.com: It is past time we act on gun violence

Politicususa: Bernie Sanders Bluntly Calls For Automatic Weapons Ban After Orlando Mass Shooting [perhaps Bernie and the author of this article should be informed it’s already illegal to purchase or obtain “automatic weapons” without approval of the FBI and has been since 1938]

About Lorri Anderson: Mother of four wonderful children and grandmother of four. Poet/writer/investigative reporter/singer/dancer/model/business owner/non-profit business owner etc… Started D.P.A.A.W.L. INC, a non-profit animal rescue in the state of Kentucky that worked closely with animal control, law enforcement, as well as the Lewis County S.P.C.A. in which I was elected to Chairman of the Board . Volunteered and worked with: Partnership Against Domestic Violence, Senior Citizens Social Services of Pike County, Community Action Committee of Pike County, Central Ohio Diabetes Association, Food Pantries, Children’s Services in both Ohio and Kentucky, Lewis County S.P.C.A., Lewis County Humane Society, as well as many other organizations. I believe strongly in our Second Amendment right to “BEAR ARMS”. I am a licensed CCW carrier and proud of it.