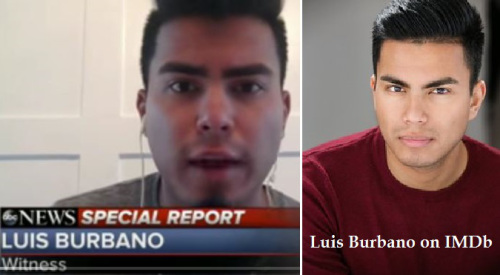 Below are some anomalies — the pieces that don’t fit — in the official narrative of the deadliest shooting in U.S. history at the Pulse gay nightclub in Orlando, Florida, in the early morning hours of June 12, 2016, which left 49 dead and 53 wounded.

We are told there was only one shooter, 29-year-old Omar Mateen who, according to his ex-wife, turns out to be a homosexual himself who frequented gay bars and had a gay hookup app, Grindr.

The problem is at least three eyewitnesses who were in the Pulse nightclub at the time of the shooting, all said there was more than one suspect.

Eyewitness #1: In an audio interview (below), after an eyewitness said, “There was a guy there that was trying to…prevent the door, like hold the door closed so that we couldn’t exit,” he was abruptly cut off.

Eyewitness #2: Another eyewitness said the shooting lasted “like eight minutes.” Beginning at the 0:29 mark in video below, when asked by the reporter if there was “somebody else,” the eyewitness said: “I’m pretty sure it was more than one person. Like I said, I heard two guns going at the same time.”

Later, at the 1:41 mark, as he described how he and some 50 other patrons were trying to flee the club, jammed in a narrow pathway, he also said there was a second suspect — “a guy kind of holding door,” preventing them from exiting.

Eyewitness #3: A victim of the shooting who played dead for several hours during the attack as a way to stay alive, told an ABC reporter after he was discharged from a local hospital that he had overheard a phone conversation made by the shooter, in which the shooter said he was the “fourth shooter” and that there were “three others” — “snipers” and a “female suicide bomber”. (Source: Intellihub)

Below are screenshots of tweets to ABC News asking why ABC News had deleted an earlier tweet that there were other shooters, and a survivor’s account of two other killers.

Remember Sandy Hook’s laughing chief medical examiner Wayne Carver and the smiling police officer standing behind him? The Orlando shooting has one too!

In the video below beginning at the 0:21 mark, as a spokesman talks to the press about the Orlando shooting casualties, a policeman with spectacles, grey hair and moustache stands behind him, grinning and laughing. Who knew a shooting massacre can be funny?

A man named Luis Burbano claims to be an eyewitness in the club and was interviewed by several media outlets, including ABC News’ George Stephanopoulos.

It turns out eyewitness Luis Burbano is a professional actor. He has a profile on IMDb . Below are side-by-side comparison of Luis Burbano in the ABC interview (left) and Luis Burbano on IMDb. It’s the same man.

You would think that in the media interviews about the Orlando shooting, Burbano would take the opportunity to give his career a boost by identifying himself as a professional actor, but he didn’t.

IMDb lists 5 acting credits under Burbano’s “Filmography,” the most recent one being his role as a “club patron” in a 2015 video called “Spirit of Orlando: Shooting Up”. You can’t make this up!

Here’s a screenshot I took from IMDb:

IMDb describes “Spirit of Orlando: Shooting Up” as a 5-minute music video, dated September 25, 2015, in which Burbano stars as a “club patron,” with other actors playing the parts of the boss and employees of PharmaCorp Inc. LLC.

As in Sandy Hook, there are tweets and news articles about the Orlando shooting which are dated June 11, 2016, a day BEFORE the shooting.

Here’s a video about shooting victims being carried TOWARD, not away from, Pulse nightclub — which makes no sense whatsoever, unless those images were all staged, i.e., theatrics.