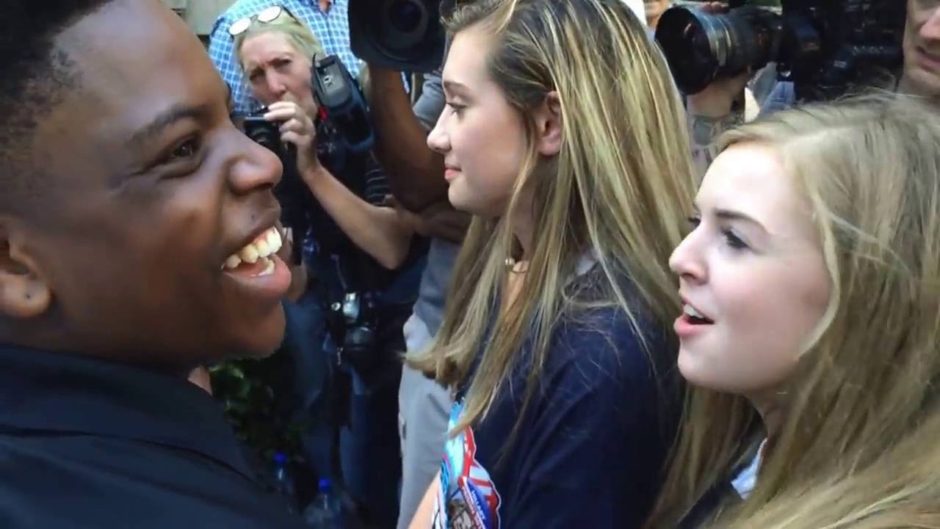 The clip shows a BLM supporter immediately confront the young black Trump supporter, claiming that Trump is “racist” and “he’s against you!”

“He wants to send you back to Africa, that’s what he said,” asserts the BLM supporter (Trump has never made any such comment).

The BLM agitator then calls the young man a “disgrace to America” before attacking his parents.

The BLM supporter gets schooled by a young girl when she points out that Trump has said he wants to deport illegal aliens, not all Mexicans.

He then claims that Trump’s wife is “not legal – she’s from Europe,” before the black Trump supporter points out, “She has a U.S. citizenship, just because she was born in another country does not mean she has illegal citizenship.”

Once again, social justice warriors seem to run into trouble when it comes to facts – Melania Trump was granted U.S. citizenship ten years ago.

A white woman then claims that Trump has used his security guards to “kick out” black people from his rallies, before the young black Trump supporter corrects her, remarking, “He does the exact same thing to white people.”

The woman demands that the black Trump supporter “educate” himself. When she is asked about her educational background, she refuses to answer.

When the BLM agitator claims that Trump is linked to the KKK, the 16-year-old Trump voter shuts him down again, commenting, “The Democratic Party founded the KKK by the way, just saying.”

The BLM supporter then makes himself look an even bigger fool by once again asserting that Trump’s wife is an illegal immigrant.

“There’s a way to legally emigrate,” states one of the young girls.

“Do you not know that? You don’t know that. Oh my God, you don’t know anything,” responds the black Trump supporter, telling the BLM supporter to go back to high school.

Another Trump supporter then demands to know how Trump was “racist” towards black people. The BLM supporter is unable to provide a specific example.

The two then begin arguing about ‘Black Lives Matter’, with the 16-year-old pointing out that more whites are killed by cops than blacks.

The exchange ends with the BLM supporter repeatedly claiming Trump is “racist” while failing to provide any proof when asked.

Another clip shows the young black Trump supporter being yelled at by a white social justice warrior, who asserts, “You’re supporting a racist!”

Back and forth between Trump supporters and Trump protesters outside the Fox. pic.twitter.com/2ih1aw19hp

The clips once again illustrate how leftists have nothing but buzzwords, anger and hot air. When it comes to a debate, they are instantly crushed when facts are brought into the equation.