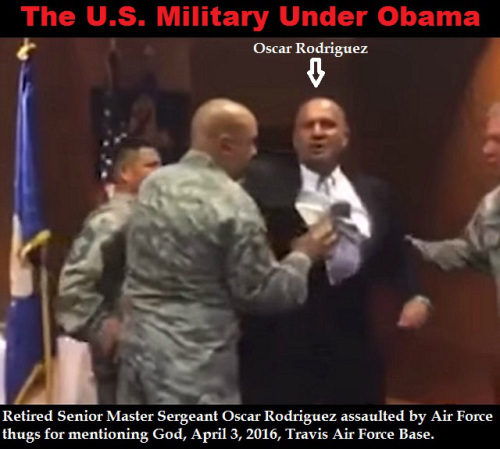 On April 3, 2016, at the retirement celebration of a colleague at Travis Air Force Base in California, retired Senior Master Sergeant Oscar Rodriguez, a 33-year veteran of the Air Force who had been invited to deliver the flag-folding speech, was assaulted and dragged out of the room by four uniformed airmen for mentioning God.

Breitbart News explains that the “flag-folding speech” is given by service members at military and civic events, including retirement ceremonies. Traditionally, this speech explains the colors, symbols, and history of the flag, as well as makes reference to God, including, “Let us pray that God will reflect with admiration the willingness of one nation in her attempts to rid the world of tyranny, oppression, and misery. It is this one nation under God that we call, with honor, the United States of America.” The speech closes with, “God bless our flag. God bless our troops. God bless America.”

In 2005, the Pentagon under the George W. Bush Administration changed the speech to remove all references to God. But many service members prefer the traditional speech and request that version be given at their own retirement celebrations.

So it was with Master Sergeant Charles Roberson, who was retiring from active duty in the 749th Aircraft Maintenance Squadron at Travis. Roberson had heard Rodriguez give his stirring rendition of the traditional flag-folding speech and asked Rodriguez if he would give that speech at Roberson’s retirement celebration.

According to a letter sent by First Liberty Institute, when the squadron’s commanding officer, Lieutenant Colonel Michael Sovitsky, learned that Rodriguez would give the traditional speech mentioning God, he expressed his opposition and tried to block it.

[Note: You have no idea how difficult it was for me to find a photo of Michael Sovitsky! The above photo of Sovitsky, taken in 2012, was the result of a long Internet search.]

Roberson asked Rodriguez to press forward, so the event went forward as planned. But as Rodriguez began his flag-folding speech, four uniformed airmen surrounded and forcibly seized him, then dragged him out of the room, with Rodriguez shouting out his speech over the heads of his assailants. Rodriguez’ assailants were not military police and had no lawful authority to arrest or detain any person, especially a private citizen like Rodriguez. Air Force personnel then expelled Rodriguez from the base entirely.

Here’s a video of the assault:

Rodriguez says, “It was one of the most humiliating experiences of my life. To have the Air Force assault me and drag me out of a retirement ceremony simply because my speech included the word ‘God’ is something I never expected from our military.”

Rodriguez has retained First Liberty Institute — the largest law firm in the United States exclusively dedicated to protecting religious liberty — as his legal counsel. First Liberty is representing Rodriguez entirely free of charge. Mike Berry, First Liberty’s director of military affairs, said, “Mr. Rodriguez has a constitutional right to free speech and religious expression, even on a military base. The military broke the law and abused its power. We expect the Air Force to hold those responsible accountable, and allow Mr. Rodriguez to continue honoring the flag and other veterans who have sacrificed for our country.”

Sunday, June 19, 2016, First Liberty sent a letter to the U.S. Air Force and the commander of Travis Air Force Base, listing the various federal laws and provisions of the U.S. Constitution that the four airmen — acting as government agents — had violated by their actions, including the First Amendment, Fourth Amendment, and Fifth Amendment of the Bill of Rights. The letter demands that the Air Force isue a formal written apology to Rodriguez, containing the following:

First Liberty Institute (FLI) is giving the Air Force seven days to meet these demands and apologize to Rodriguez, or FLI’s lawyers will file a federal civil-rights lawsuit in U.S. district court to seek justice for Rodriguez.