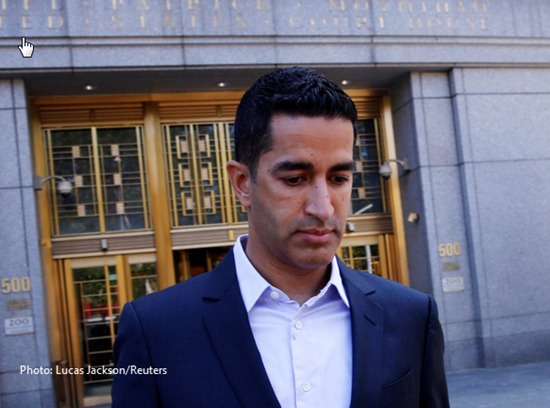 Bankers commit suicide in some of the strangest ways. This particular story, however, is almost as believable as that banker who supposedly shot himself eight times in the head and chest with a nail gun.

According to Reuters, he was found with his throat cut in what is being reported as “an apparent suicide”:

Valvani, 44, was discovered by his wife on Monday evening in the bedroom of his Brooklyn home with a wound to his neck, a New York Police Department spokeswoman said. A suicide note and a knife were recovered, she added.

The death marked a stunning turn in one of the U.S. government’s biggest recent insider trading cases. Valvani’s lawyers, Barry Berke and Eric Tirschwell, called his death a “horrible tragedy that is difficult to comprehend.”

“We hope for the sake of his family and his memory that it will not be forgotten that the charges against him were only unproven accusations and he had always maintained his innocence,” they added.

The city’s medical examiner’s office will determine the cause of Valvani’s death, and police said an investigation was under way.

The charges, that he always claimed he was innocent of and which he pleaded not guilty to, involved garnering $25 million off of advanced knowledge of generic FDA drug application approvals.

If you maintained your innocence, you pleaded not guilty to all charges, and you clearly had this much money to afford a good legal team with, would you just up and commit suicide a week after you were charged by slashing your own throat?