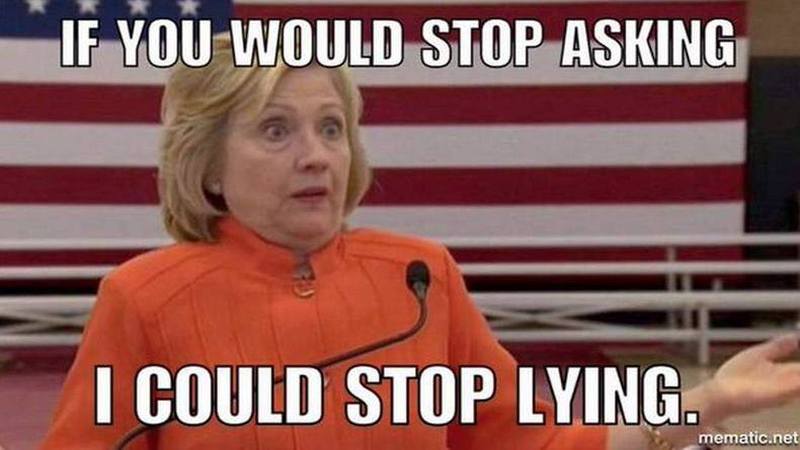 She lied about this multiple times and it’s all on tape that none of it… not a piece of it… EVER HAPPENED.

If Hillary would randomly lie about something like this that never happened, how can the people who support her believe she would ever tell the truth about anything? She lies about things that aren’t even worth lying about. She’s a lying liar who lies. Brian Williams was crucified for the same thing, but Hillary’s camp is trying to claim this is a conspiracy theory?

No, it’s a fact that she’s a liar. She’s like the Brian Williams of presidential candidates.

Here’s the short and sweet of it, Via Breitbart:

The lie, which she told more than once, is coming back to haunt her in the ongoing election cycle.

Clinton’s rival, the presumptive Republican presidential nominee Donald Trump, has recently highlighted her false claims on the campaign trail, describing Clinton as a “world class liar” and calling out her “phony landing in Bosnia, where she said she was under attack and the attack turned out to be young girls handing her flowers” during a speech Wednesday.

In a speech at George Washington University in March 2008, the now-presumptive Democratic presidential nominee said that, when she arrived in Bosnia on March 25, 1996, “I remember landing under sniper fire. There was supposed to be some kind of a greeting ceremony at the airport, but instead we just ran with our heads down to get into the vehicles to get to our base.”

Except, NONE OF THAT NEVER HAPPENED.

Below, for people who haven’t seen it yet, is the video evidence of what a total and complete liar Hillary is and just how completely made up her whole Bosnia sniper fire story is.

The most hilarious part is when her campaign aide tries to spin it into something totally different… which is just, you guessed it, ANOTHER BIG FAT LIE!!!